In June 2014, the FDA Oncology Drug Advisory Committee voted 11-2 to delay approval of AstraZeneca’s olaparib, a PARP (poly-ADP ribose polymerase) inhibitor for maintenance therapy in patients with ovarian cancer.  The product received Accelerate Approval designation from the FDA, which provides for conditional approval pending follow-up studies, based on surrogate endpoints from Phase 2 trials, in this case, progression-free survival (PFS).  The advisory panel wants to wait to see the results of a larger Phase 3 study that is ongoing in patients with BRCA1 and BRCA2 mutations, which is evaluating the outcome of overall survival (OS). However, in December, the FDA approved the product for a different claim –  patients with gBRCAm-associated ovarian cancer who have received three or more chemotherapy treatments

I believe that the drug should have been approved in June, under the Accelerated Approval program.  In the subset of patients with BRCA mutations enrolled in the Phase 2 study, there was an 83% reduction in the risk of progression.  This is amazing, especially in ovarian cancer where patients relapse frequently following courses of treatment.  So, extending the time between relapse means that the patients will have to undergo fewer courses of very toxic chemotherapy. 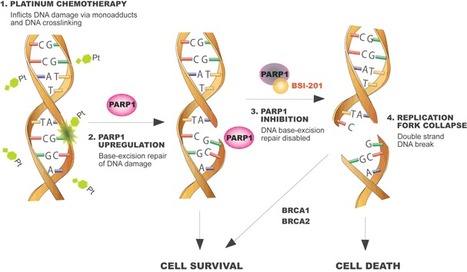 This drug could have certainly been labeled to address the downsides raised by the panel, including the risk of second malignancies, which were seen in 2.2% of the patients receiving treatment with olaparib.  The panel felt that this is a higher incidence than would be expected.  [Seeing melodysplastic syndrome and acute myelogenous leukemia in patients in the study makes sense, given the prior platinum-based treatments that the patients received AND the mechanism of action of olaparib, which will lead to single-strand breaks in DNA, which are mutagenic.]

I feel that the labeling of the product can address the safety concerns for maintenance therapy such that the benefits to patients can outweigh the risks. I am thrilled that it was approved, at least for the refractory claim.