5-Fluorouracil and leucovorin act by disrupting thymidine triphosphate metabolism, which impedes DNA replication and transcription by depleting the cell of the nucleotide.

Irinotecan (Camptosar) acts by blocking Topoisomerase-1, an enzyme responsible for uncoiling DNA, which is necessary to enable DNA replication and gene transcription. Irinotecan (a derivative of camptothecin) stabilizes the transient DNA strand breaks made by Topoisomerase-1, leading to DNA fragmentation and cell death. 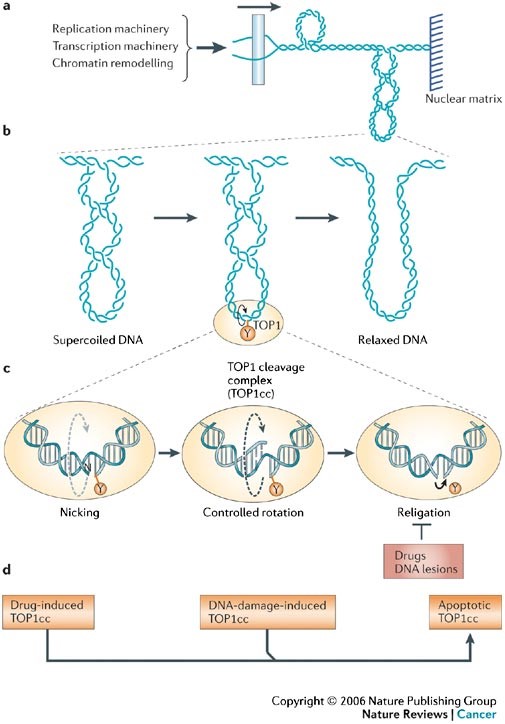 Relaxation of DNA supercoiling by TOP1-mediated DNA cleavage complexes, and the trapping of TOP1 cleavage complexes by drugs, DNA modifications and during apoptosis. a | The generation of DNA supercoiling by DNA replication, transcription and chromatin remodelling. The unwinding of duplex DNA by macromolecular complexes tracking along the DNA (arrow) without rotating freely around the DNA double helix, which is also unable to rotate freely owing to its length or attachment to nuclear matrix regions, generates positive supercoiling ahead of the unwound segment and negative supercoiling behind (negative supercoiling not shown). b | The introduction of DNA single-strand breaks (nicks) by TOP1 provides swivel points that enable the rotation of the intact DNA strand around the break and facilitate DNA relaxation. The cleavage intermediate is referred to as a cleavage complex because TOP1 cleaves DNA by forming a covalent bond to the 3′ DNA terminus that it generates. The covalently linked catalytic tyrosine of TOP1 (Y723 for human TOP1) is shown as the yellow circle. c | An expanded view of DNA relaxation by a TOP1 cleavage complex (TOP1cc). The first step (left) is a transesterification reaction whereby the catalytic tyrosine (Y) becomes linked to the 3′ DNA end (nicking step). In the second step (middle), the torsional strain that results from DNA supercoiling drives the rotation of the 5′ end of the nicked DNA strand around the intact strand. TOP1 encircles the rotating nicked DNA and slows its rotation (FIG. 3a). This process is referred to as ‘controlled rotation’. In the last step (right), the 5′ end of the nicked DNA is realigned with the corresponding 3′ end, which enables DNA religation (the closing step of the ‘nicking–closing reaction’). TOP1ccs are normally transient because the closing step is much faster than the nicking step. Drugs and DNA lesions inhibit religation by misaligning the ends of the broken DNA. d | TOP1ccs can be stabilized under three conditions: by drugs such as camptothecin (left), by DNA lesions (damage) that misalign the 5′ end of the nicked DNA, and by DNA and TOP1 modifications that occur during programmed cell death (apoptosis). http://www.nature.com/nrc/journal/v6/n10/full/nrc1977.html

R-spondin growth factors bind to LGR proteins and mediate activation of the Wnt signaling pathway, which has roles in animal development, as well as in diseases such as cancer. LGR proteins are found on cancer stem cells.

LGR proteins are cell-surface receptors. Lgr1, Lgr2 and Lgr3 are hormone receptors that signal through G proteins. But Lgr4, Lgr5 and Lgr6 have been considered ‘orphan’ receptors because, despite extensive searching, their activators remained mysterious. Nonetheless, Lgr4 is known to have an essential role in the development of the male reproductive tract, as well as the eyelids, hair and bone. Mice lacking Lgr5 die shortly after birth of malformation of the tongue and lower jaw.

Lgr6, like Lgr5, is a specific stem-cell marker in several epithelial layers: whereas Lgr5 marks proliferative stem cells in the gastrointestinal tract, Lgr6 specifically occurs on the multi-potential stem cells of the skin. 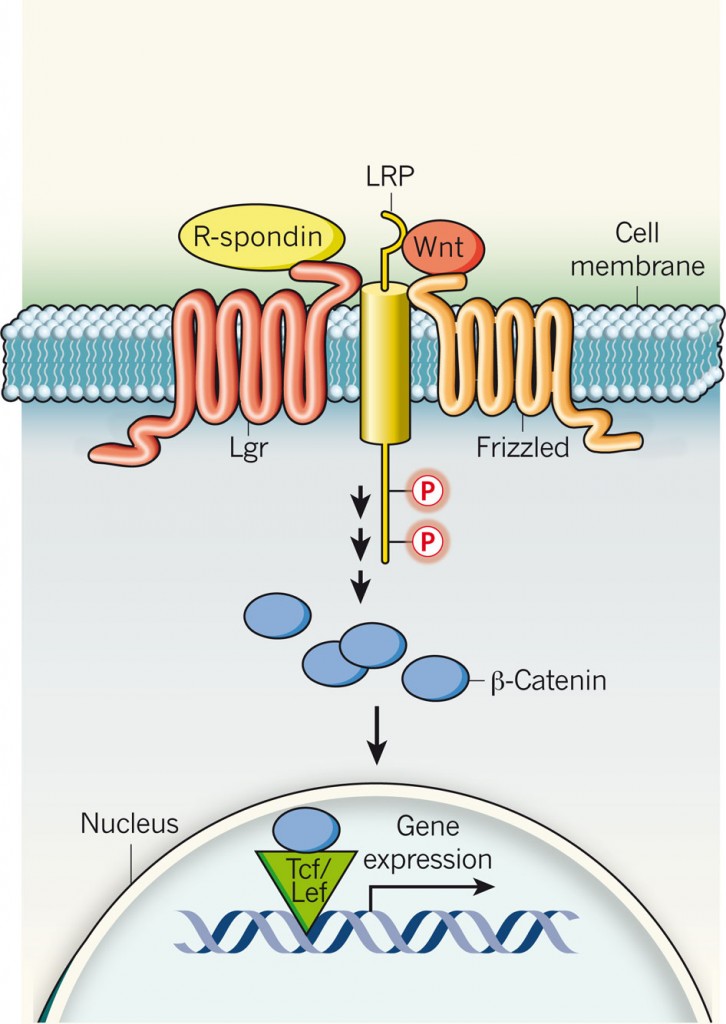 R-spondins activate Lgr membrane proteins, which are also specific stem-cell markers. Lgr proteins then recruit the LRP–Frizzled receptor complex, which binds to Wnt ligands, reinforcing Wnt signalling following phosphorylation (P) of LRP. A series of steps that follow stabilizes β-catenin, which is translocated to the nucleus and, together with the Tcf/Lef family of transcription factors, induces gene expression. http://www.nature.com/nature/journal/v476/n7360/full/476287a.html?WT.ec_id=NATURE-20110818

In preclinical studies OncoMed’s anti-RSPO3 antibody demonstrated robust in vivo anti-tumor efficacy as a single agent and in combination with standard of care across a range of solid tumors, including colon, lung, ovarian, and pancreatic cancers, among others. The anti-RSPO3 antibody delayed tumor recurrence following termination of chemotherapy, and decreased the frequency of cancer stem cells. A proprietary biomarker to screen prospectively screen patients for expression of RSPO is being developed in conjunction with this clinical program. 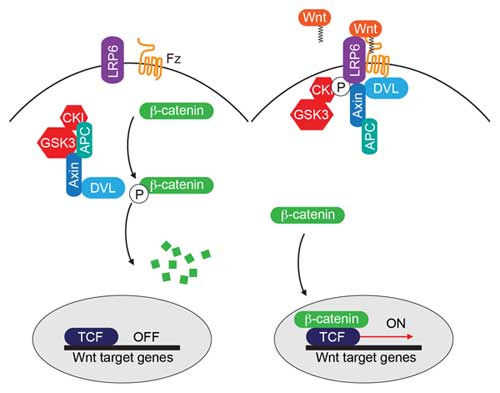 The canonical Wnt/β-catenin pathway. Binding of Wnt to the receptors Frizzled (Fz) and LRP6 leads to inhibition of β-catenin degradation. β-catenin in turn interacts with members of the TCF/Lef-1 family of transcription factors to co-activate target gene transcription. http://www.wormbook.org/chapters/www_wntsignaling.2/wntsignal.html 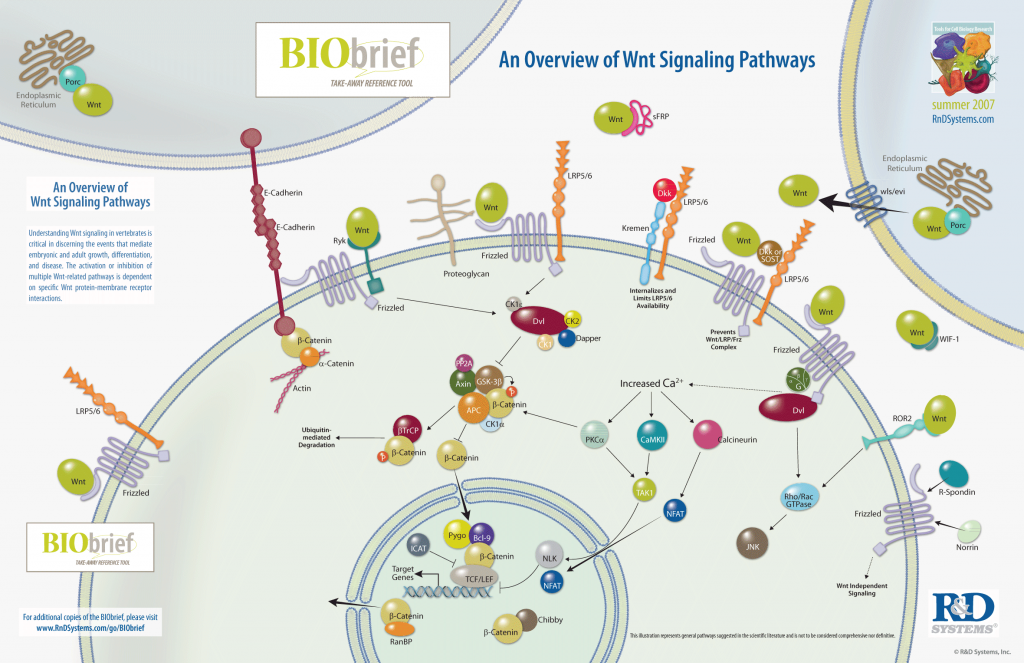