A collaboration between Bristol-Myers Squibb and Kyowa Hakko Kirin to test a combination of Kyowa’s Poteligeo (mogamulizumab), an anti-CCR4 antibody, and BMS’ Opdivo (nivolumab) in a Phase I/II trial in advanced or metastatic solid tumors was announced. Also, Merck announced the acquisition of cCAM Biotherapeutics for $605MM for its CM-24 monoclonal antibody that target CEACAM1.

All of these products are designed to block the immune abrogating signals that enable cells to avoid immune destruction.

We have discussed checkpoint blockade by PD-1, previously – PD-1 is a molecule expressed in the surface of T-cells, which when binding to PD-L1, causes the T-cell to down-regulate, that is, to no longer mount an anti-tumor immune response.  This is a normal part of the second wave of cell mediated immunity.  Nivolumab is an antibody that binds to PD-1 and blocks it from interacting with PD-L1 (expressed on cancer cells and antigen presenting cells), which then prevents Cytotoxic T-cells from becoming down-regulated against the antigens expressed on the neighboring TCR (T-cell receptor) – see article.  Blocking a blocker allows the anti-tumor response (first wave) to proceed unabated, which in the context of cancer is the desired outcome.

PD-1 and cancer. A, ligation of T-cell PD-1 by tumor B7-H1 results in the downregulation of T-cell effector functions that destroy tumor tissue. B, blockade of this pathway by anti-PD-1 antibodies prevents this downregulation, and allows T cells to maintain their antitumor functionality and ability to mediate tumor cell death. http://clincancerres.aacrjournals.org/content/19/5/1021.figures-only 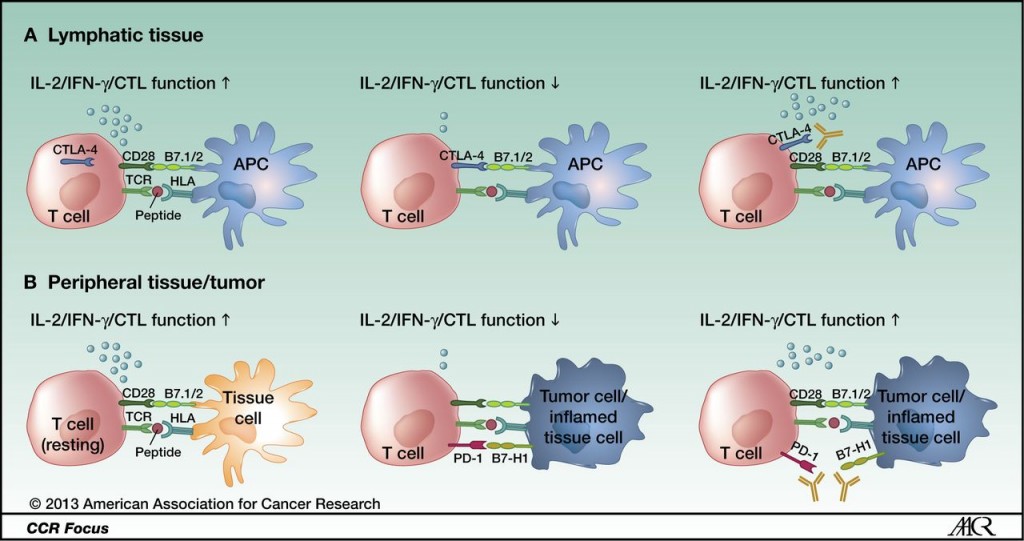 CTLA-4 and PD-1 modulate different aspects of the T-cell response: A, CTLA-4 is upregulated after antigen-specific activation of a naïve or memory T cell in lymphatic tissue, leading to decreased effector function (early activation phase). B, PD-1 is mainly expressed on antigen-experienced memory T cells in peripheral tissues cells. The immune modulation mediated by this pathway ensures protection of tissue from collateral damage during an inflammatory response. Tumor cells use this regulatory mechanism to evade a tumor-directed T-cell response by upregulating the PD-1 ligands B7-H1 and B7-DC. http://clincancerres.aacrjournals.org/content/19/19/5300.figures-only

Costimulatory and co-inhibitory ligand–receptor interactions between a T cell and a dendritic cell, a tumor cell, and a macrophage, respectively, in the tumor microenvironment. http://clincancerres.aacrjournals.org/content/19/19/5300.figures-only

CEACAM1 is absent on normal melanocytes, but it is expressed widely in metastatic melanoma and several solid and blood borne malignancies, including lung cancer, pancreatic cancer and multiple myeloma. 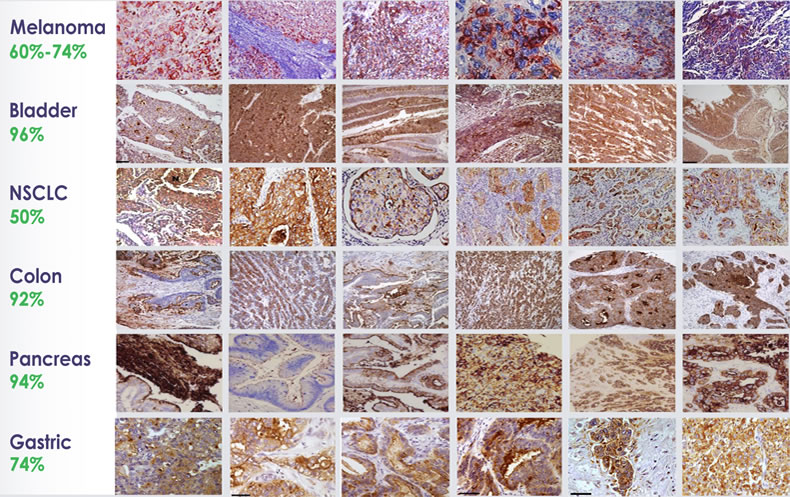 CEACAM1 is expressed on epithelial and endothelial cells, lymphocytes, and myeloid cells. It is part of the Carinoembryonic Antigen (CEA) family of adhesion molecule receptors. . Each receptor has an amino-terminal immunoglobulin variable-region-like (IgV-like) domain that, owing to its presence at the N terminus of the protein, is often known as the N domain. Most of the rest of the extracellular part of each receptor is comprised of a variable number of immunoglobulin constant-region-type-2-like (IgC2-like) domains. 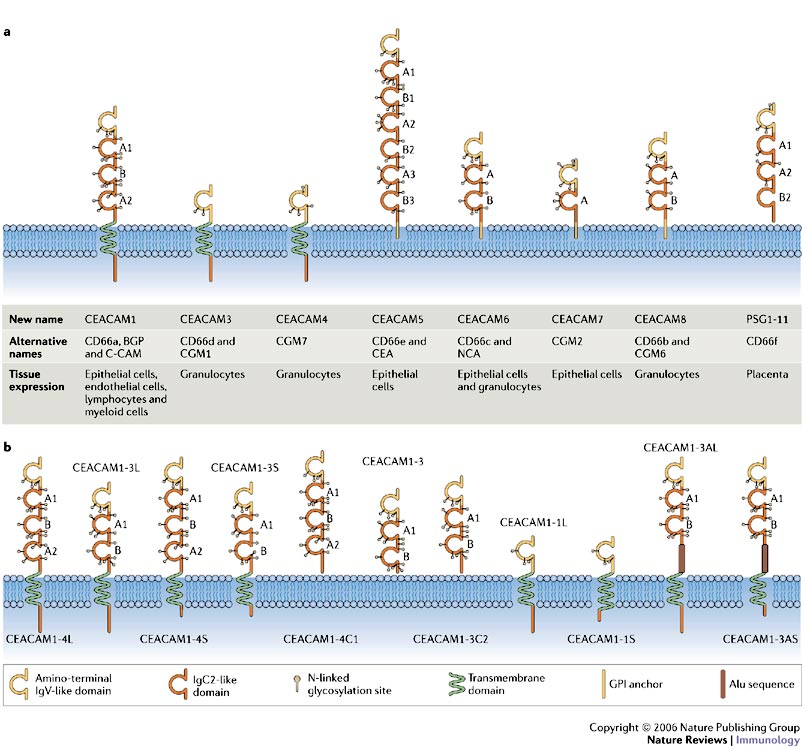 a | Domain structure and predicted glycosylation pattern of the main isoforms encoded by the carcinoembryonic antigen (CEA) gene family. Alternative names are indicated, as is the range of cells expressing each receptor. Each receptor has an amino-terminal immunoglobulin variable-region-like (IgV-like) domain that, owing to its presence at the N terminus of the protein, is often known as the N domain. Most of the rest of the extracellular part of each receptor is comprised of a variable number of immunoglobulin constant-region-type-2-like (IgC2-like) domains. b | The gene encoding CEA-related cell-adhesion molecule 1 (CEACAM1) consists of 9 exons that can be alternatively spliced to generate 11 different isoforms. The domain structure and predicted glycosylation pattern of each protein isoform is illustrated. Letters next to the domains indicate the relationship to A or B subsets of IgC-like domains. The most common isoforms expressed by human immune cells are CEACAM1-4L, CEACAM1-3L, CEACAM1-4S and CEACAM1-3S. Standardized nomenclature for this receptor1 dictates that the number after CEACAM1 indicates the number of extracellular immunoglobulin-like domains, whereas the letter that follows this indicates the presence of either a long (L) or a short (S) cytoplasmic tail, a unique termini (C), or an Alu family repeat sequence present within the open reading frame (A). GPI, glycosylphosphatidylinositol; PSG, pregnancy-specfic glycoprotein. http://www.nature.com/nri/journal/v6/n6/fig_tab/nri1864_F1.html 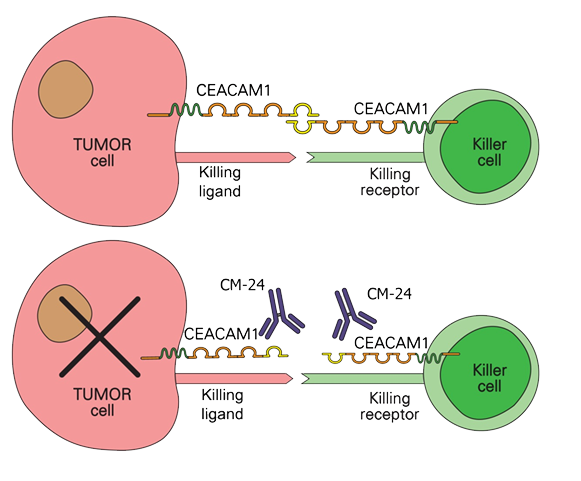 Effector human Tregs (but not naïve T cells, Th1, and CTLs) and certain T cell lymphomas express CCR4 3 and 4. CCR4 is a receptor for chemokines CCL22 and CCL17 that are produced mainly by DCs and macrophages. CCR4–CCL22/CCL17 interaction plays a major role in Treg migration and in metastasis of CCR4+ lymphoma cells.

Additionally, Th2 and a small population of Th17 cells also express CCR4, and recruitment of these cells to tumor sites is associated with poor prognosis. Therefore, CCR4 represents an ideal target to block both Tregs and CCR4+ lymphoma cells. 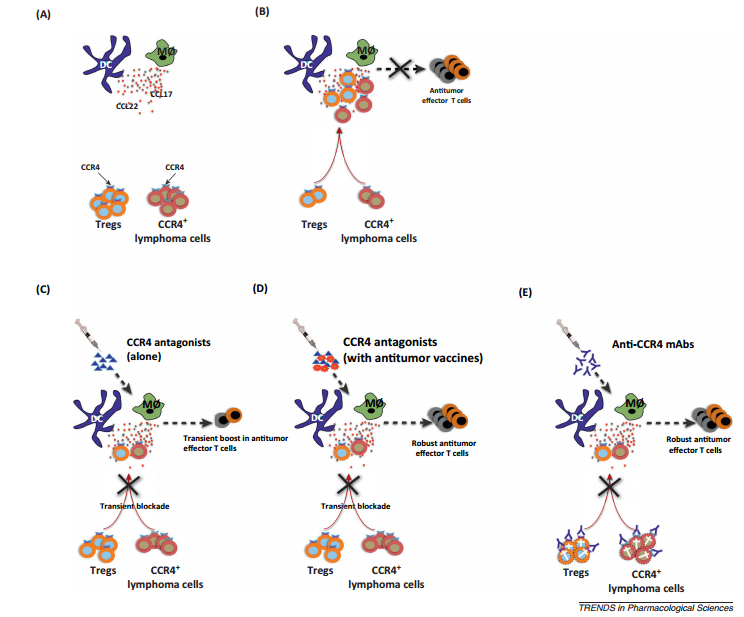 CCR4 as a target both for tumor cell lysis and to boost immune response to cancer via regulatory T cellblockade. (A) Innate immune cells such as dendritic cells (DCs) and macrophages secrete large amounts of chemokines CCL22 and CCL17. These act as ligands for CCR4, which is predominantly expressed on effector regulatory T cells (Tregs) and also on certain lymphoma cells. (B) Infiltrating Tregs modulate the functions of innate cells and suppress subsequent induction of antitumor effector T cells. In addition, CCL22 and CCL17 promote the metastasis of CCR4+ lymphoma cells. (C) Small molecule CCR4 antagonists bind to CCR4 and inhibit the migration of CCR4+ cells in response to CCL17 and CCL22 and hence relieve the suppression on innate cells. However, the effect of CCR4 antagonists is transient due to their short half-life. Consequently, Tregs migrate again and CCR4+ tumor cells override this short window of inhibition by CCR4 antagonists. Also, CCR4 antagonists would not prevent local expansion of Tregs in the tumor site. These shortcomings might prevent direct application of CCR4 antagonists for anticancertherapy to boost immune response to cancer. (D) CCR4 antagonists, however, hold promise for tumor vaccines. When combined with tumor vaccine, CCR4 antagonists act as adjuvants by transiently inhibiting Tregs as well as CCR4+ tumor cell migration at the site of vaccination. This short window of Treg blockade would allow professional antigen presenting cells such as DCs to prime effective antitumor immune responses. (E) Anti-CCR4 monoclonal antibodies (mAbs) in contrast to antagonists exert cytotoxic action both on CCR4+ tumor cells and Tregs. Thus, depletion of both Tregs and tumor cells and the long half-life of anti-CCR4 mAbs favor a better induction of antitumor effector T cells. However, it is not yet known whether anti-CCR4 mAbs would induce antitumor T cells in non-CCR4 tumor conditions. http://www.sciencedirect.com/science/article/pii/S0165614714000200

CD4+ Treg cells expressing the transcription factor FOXP3 (forkhead box P3) are abundant in tumor tissues and appear to hinder the induction of effective antitumor immunity. A substantial number of T cells, including Treg cells, in tumor tissues and peripheral blood express C-C chemokine receptor 4 (CCR4). Here we show that CCR4 was specifically expressed by a subset of terminally differentiated and most suppressive CD45RA−FOXP3hiCD4+ Treg cells [designated effector Treg (eTreg) cells], but not by CD45RA+FOXP3loCD4+ naive Treg cells, in peripheral blood of healthy individuals and cancer patients. In melanoma tissues, CCR4+ eTreg cells were predominant among tumor-infiltrating FOXP3+ T cells and much higher in frequency compared with those in peripheral blood.