OncoMed is a biotech company that is developing therapies directed at the Wnt and Notch signaling pathways.  Clinical studies with two products directed at the Wnt pathway (Vantictumab – anti-Fzd-7, and Fzd-8 Fc) have been halted by the company while it explores findings of bone toxicity.

Wnt signaling is critical for proliferation by protecting beta-catenin from destruction by glycogen synthetase 3-beta (GSK-3B), which allows it to associate with Tcf/Lef forming a transcription factor that induces Cyclin D and myc to drive proliferation, and it forms an autologous feedback loop that maintains the EMT (epithelial-mesenchymal transition). 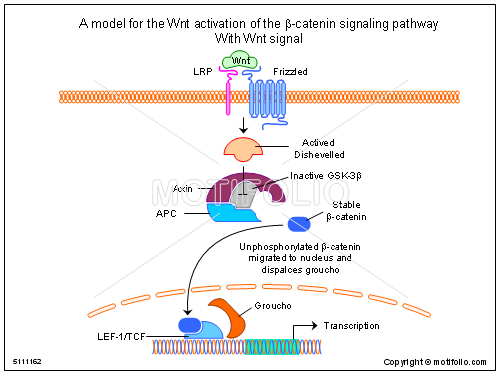 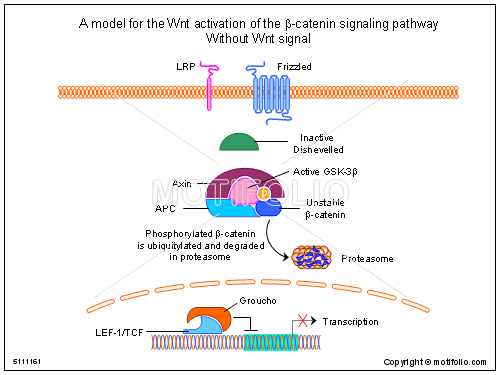 It is interesting that BOTH compounds that disrupt the Wnt pathway cause the bone toxicity, which suggests that Wnt signaling is important in bone physiology.  Indeed, this is the case – see http://ncbi.nlm.nih.gov/pubmed/23514963 –  Induction of the Wnt signaling pathway promotes bone formation while inactivation of the pathway leads to osteopenic states, and http://www.ncbi.nlm.nih.gov/pubmed/18055419 – The role of the Wnt signaling pathway in osteoblast commitment and differentiation. 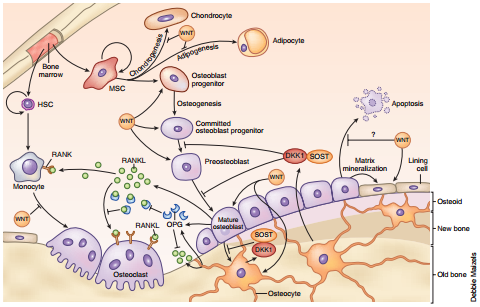 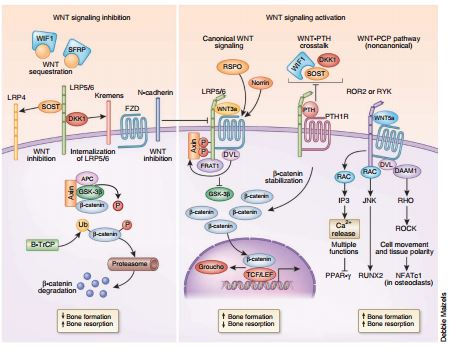 WNT signaling: a simplified view. In the absence of WNT, the amounts of β-catenin are low, except in adherens junctions, because of its constitutive targeting by a multiprotein destruction complex (left). The tumor suppressors axin and adenomatous polyposis (APC) bring β-catenin to GSK-3β and casein kinase 1 (CK1) (not shown), resulting in its phosphorylation (Ps in circles) at specific serine/threonine residues (left). Phosphorylated β-catenin is then targeted for polyubiquitination (Ub) (predominantly by the E3 ligase B-TrCP) and proteosomal destruction. T cell factor/lymphoid enhancer factor (TCF/LEF) transcription factors are repressed by Groucho in the nucleus. Binding of canonical WNT ligands to a dual receptor complex comprising the WNT co-receptors LRP5 or LRP6 (LRP5/6) and one of the seven transmembrane receptors of the FZD family (right) initiates WNT–β-catenin signaling. Axin moves to the LRP5/6 tail at the membrane through its interaction with dishevelled (DVL, also called DSH), which is recruited by FZD (right). This forms a complex that also includes FRAT1 and GSK- 3β, which prevents phosphorylation of β-catenin and its proteosomal degradation. β-catenin accumulates in the cytoplasm and translocates into the nucleus, where it associates with members of the TCF/LEF transcription factors while displacing Groucho to control target gene transcription. WNT signaling is modulated not only through fine tuning by a large number of WNT ligands and RSPO proteins and norrin (right) but also by extracellular antagonists such as DKK1, SOST and Wise, which bind LRP5/6 (left). Their antagonism is mediated or enhanced by receptors such as Kremen proteins and LRP4. In addition to sequestering β-catenin, N-cadherin also inhibits WNT–β-catenin signaling by interacting with LRP5 (left to right). In contrast, secreted frizzled-related proteins (SFRPs) and WNT inhibitory factor 1 (WIF1), which have ligand specificity, inhibit WNT signaling by directly sequestering WNT ligands and inhibiting both canonical and noncanonical WNT signaling (left). The PTH1 receptor can also activate the pathway in the absence of WNT ligands by forming a complex with LRP5/6 after PTH binding (right). In the WNT-PCP pathway (right), WNT binding to FZD also recruits DVL, which forms a complex with dishevelled associated activator of morphogenesis 1 (DAAM1) to trigger activation of the small G protein RHO, which in turn activates RHO-associated kinase (ROCK). Alternatively, DVL forms a complex with RAC, resulting in Jun kinase (JNK) activity. The WNT-Ca2+ pathway is activated by WNT5a binding to FZD and receptor-tyrosine-kinase-like orphan receptor (ROR). Intracellular calcium concentrations increase after WNT-induced coupled G protein activation of phospholipase C (PLC), resulting in dystroglycan 1 (DAG) and inositol 1,4,5-trisphosphate, type 3 (IP3) generation and cyclic GMP (cGMP)-specific phosphodiesterase (PDE) decreasing the amount of cGMP. NFATc1, nuclear factor of activated T cells, cytoplasmic, calcineurin dependent 1; PPAR-γ, peroxisome proliferator activated receptor-γ.

The company states that is now working to amend the studies’ designs, reducing dosage, altering safety monitoring and changing the patient enrollment criteria. The biotech plans to send its new protocols to the FDA and resume development of vantictumab and Fzd8-Fc if and when the agency signs off.”  Bayer partnered with OncoMed in 2010, handing over $40 million up front for the right to buy up to 5 candidates that inhibit cancer stem cells’ Wnt signaling pathway, agreeing to pay as much as $387.5 million for each. Vantictumab and Fzd8-Fc are the two most advanced candidates under that deal.
(OncoMed hits the brakes on cancer studies after troubling safety signs – FierceBiotech http://www.fiercebiotech.com/story/oncomed-hits-brakes-cancer-studies-after-troubling-safety-signs/2014-06-13#ixzz34hv1XV84).

This demonstrates the uncertainties, difficulties, and challenges in the discovery and development of true breakthrough medical innovations, which is a very time consuming, very costly endeavor.  The balancing of “off-target’ side effects and desired therapeutic effect is one of the most critical elements of drug development. Antibodies against Wnt have been shown to have activity against osteoporosis in women.  Of course the risk of this approach to treat osteoporosis and other bone disorders is the risk of driving cancers.

Finding ways to increase the therapeutic window of the desired effect (either anti-cancer or pro-bone morphogenesis) is a big part of early clinical trials.  Further, if these products come to market, understanding the risks selecting appropriate patients is critical given the biology of Wnt signaling.