A Phase III study in patients with chemo-refractory colorectal cancer with wild-type K-ras genotype demonstrated that Amgen’s Vectibix (panitumumab) improved overall survival compared to best supportive therapy, alone. A total of 377 patients were randomized to receive best supportive care with or without intravenous infusions of Vectibix every 14 days. Full results of the study will be presented at a future medical meeting and submitted for publication.

Vectibix is currently approved by the FDA in combination with FOLFOX for first-line treatment of patients with colorectal cancer, and as monotherapy following disease progression after prior treatment with fluoropyrimidine, oxaliplatin, and irinotecan-containing chemotherapy. Vectibix (panitumumab) is a recombinant, human IgG2 kappa monoclonal antibody that binds specifically to the human epidermal growth factor receptor (EGFR). Panitumumab has an approximate molecular weight of 147 kDa. Panitumumab is produced in genetically engineered mammalian (Chinese hamster ovary) cells.

What is Vectobix and how does it work?

The EGFR is a transmembrane glycoprotein that is a member of a subfamily of type I receptor tyrosine kinases, including EGFR, HER2, HER3, and HER4. EGFR is constitutively expressed in normal epithelial tissues, including the skin and hair follicle. EGFR is overexpressed in certain human cancers, including colon and rectum cancers. Interaction of EGFR with its normal ligands (eg, EGF, transforming growth factor-alpha) leads to phosphorylation and activation of a series of intracellular proteins, which in turn regulate transcription of genes involved with cellular growth and survival, motility, and proliferation. KRAS (Kirsten rat sarcoma 2 viral oncogene homologue) and NRAS (Neuroblastoma RAS viral oncogene homologue) are highly related members of the RAS oncogene family. Signal transduction through the EGFR can result in activation of the wild-type KRAS and NRAS proteins; however, in cells with activating RAS somatic mutations, the RAS-mutant proteins are continuously active and appear independent of EGFR regulation.

Panitumumab binds specifically to EGFR on both normal and tumor cells, and competitively inhibits the binding of ligands for EGFR. Nonclinical studies show that binding of panitumumab to the EGFR prevents ligand-induced receptor auto-phosphorylation and activation of receptor-associated kinases, resulting in inhibition of cell growth, induction of apoptosis, decreased pro-inflammatory cytokine and vascular growth factor production, and internalization of the EGFR. In vitro assays and in vivo animal studies demonstrate that panitumumab inhibits the growth and survival of selected human tumor cell lines expressing EGFR.

Schematic illustration of the proposed mechanism of panitumumab. Panitumumab is a monoclonal antibody that binds to the extracellular portion of the EGFR preventing dimerization and the cascade that leads to the expression of growth factors. (Illustration courtesy of Carolyn Nowak.) http://www.ajnr.org/content/32/6/1002/F1.expansion.html. The activity of pamitumumab is dependent upon wild-type Ras – in cells with activating RAS somatic mutations, the RAS-mutant proteins are continuously active and appear independent of EGFR regulation. Ras mutations trigger cell proliferation irrespective of EGFR-ligand binding. 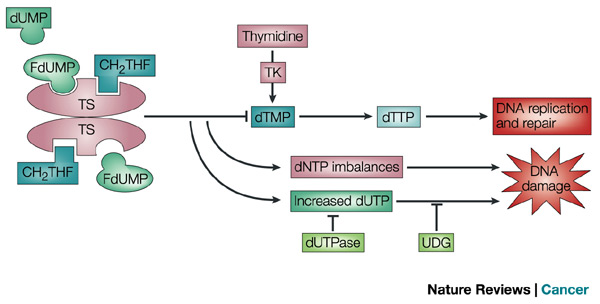 Thymidylate synthase (TS) catalyses the conversion of deoxyuridine monophosphate (dUMP) to deoxythymidine monophosphate (dTMP) with 5,10-methylene tetrahydrofolate (CH2THF) as the methyl donor. The 5-fluorouracil (5-FU) active metabolite fluorodeoxyuridine monophosphate (FdUMP) binds to the nucleotide-binding site of TS and forms a stable ternary complex with TS and CH2THF, blocking access of dUMP to the nucleotide-binding site and inhibiting dTMP synthesis. This results in deoxynucleotide (dNTP) pool imbalances and increased levels of deoxyuridine triphosphate (dUTP), both of which cause DNA damage. The extent of DNA damage caused by dUTP is dependent on the levels of the pyrophosphatase dUTPase and uracil-DNA glycosylase (UDG). dTMP can be salvaged from thymidine through the action of thymidine kinase (TK). http://www.nature.com/nrc/journal/v3/n5/fig_tab/nrc1074_F2.html