The best way to cure cancer is to catch it early when surgical removal of a localized mass can successfully rid the patient of all cancer cells and cancer stem cells. This is no more important than in pancreatic cancer for which late stage therapies have not been shown to be very effective. (Thank you, Elaine, for sending me this article to discuss on the blog.)

For all stages combined, the 1- and 5-year relative survival rates are 28% and 7%, respectively. This means that 72% of patients diagnosed with pancreatic cancer die within 12 months; for patients diagnosed with distant metastases, the 1- and 5-year survival is just 15% and 2%, respectively. Pancreatic cancer has the lowest survival rates of all cancers and is the third leading cause of cancer mortality (40,560 pts), trailing only lung cancer (158,040 pts) and colorectal cancer (49,700 pts).

Melo and colleagues identified a cell surface proteoglycan, glypican-1 (GPC1), specifically enriched on cancer-cell-derived exosomes. GPC1+ circulating exosomes (crExos) were monitored and isolated using flow cytometry from the serum of patients and mice with cancer. GPC1+ crExos were detected in the serum of patients with pancreatic cancer (n = 56) with absolute (meaning 100%) specificity and sensitivity, distinguishing healthy subjects (n = 20) and patients with a benign pancreatic disease (n = 6) from patients with early- and late-stage pancreatic cancer. Levels of GPC1+ crExos correlate with tumour burden and the survival of pre- and post-surgical patients. GPC1+ crExos from patients and from mice with spontaneous pancreatic tumours carry specific KRAS mutations, and reliably detect pancreatic intraepithelial lesions in mice despite negative signals by magnetic resonance imaging. GPC1+ crExos may serve as a potential non-invasive diagnostic and screening tool to detect early stages of pancreatic cancer to facilitate possible curative surgical therapy. 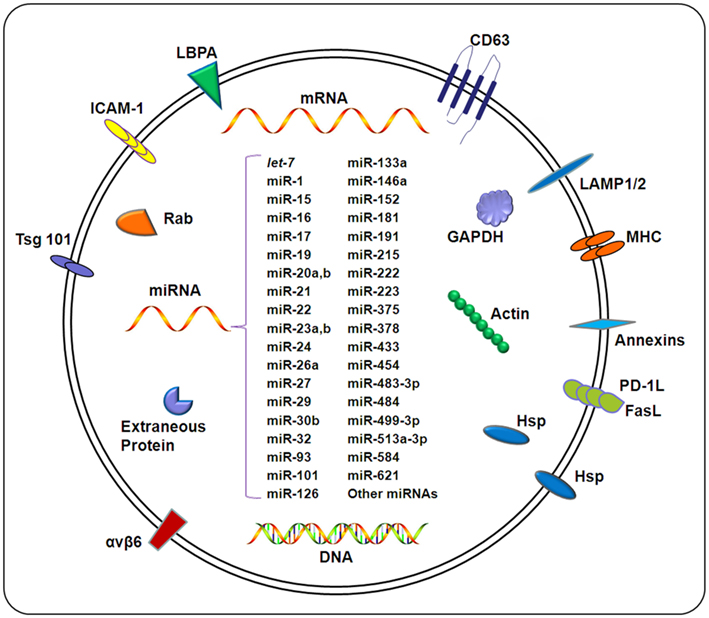 Composition of exosomes. Exosomes carry a wide array of molecules including proteins, DNAs, mRNAs, and miRNAs, depending on a variety of factors including the cell type from which the exosome originates, the state of health of the host, and extracellular stimuli. The contents of exosomes can be transferred from origin cells to target cells, resulting in an elaborate intercellular communication network. Exosomal miRNAs confirmed by different methods (e.g., microarray and qPCR) under different pathological conditions are listed in this figure.

Tumor-derived exosomes may significantly influence the development and effectiveness of anti-tumor immune responses (Rupp et al., 2011). Exposure of peripherial blood mononuclear cells (PBMCs) to exosomes isolated from ascites of ovarian cancer patients impaired the cytotoxic activity of the PBMCs in the presence of dendritic cells. In addition to containing tumor antigens, exosomes secreted from cancer cells also have been shown to contain two molecules critical to immunoregulation, PD-L1 and FasL. The presence of FasL and TRAIL in exosomes may contribute to apoptosis of cells of the immune response, thereby serving as a mechanism of tumor escape from immunosurveillance (Peng et al., 2011). For example, exosomes from plasma of cancer patients have been shown to induce T cell apoptosis (Ichim et al., 2008), reminiscent of Fas-FasL counterattack that has been described in some cancers (Alderson et al., 1995; O’Connell et al., 1998). Interestingly, macrophages have been shown to influence the invasiveness of breast cancer cells through exosome-mediated delivery of oncogenic miRNAs from the macrophages to the cancerous cells (Yang et al., 2011).

Proteoglycans (PGs) are glycoproteins that contain long, covalently-linked unbranched chains of repeating disaccharides. HSPGs, proteoglycans with heparan sulfate (HS) glycosaminoglycan (GAG) chains, are abundant components of cells and the extracellular matrix (ECM) and as such serve diverse roles in development and pathophysiology. HSPGs act as signaling co-receptors for growth factors and morphogens, regulate the stability and distribution of signaling molecules in the ECM and chemokine gradients at sites of injury, modulate cell adhesion and motility, and affect intracellular membrane trafficking. There are three classes of HSPGs: the secreted extracellular matrix proteoglycans, the transmembrane syndecans, and the GPI-linked glypicans. In mammals, six glypicans (GPC1-6) have been identified. All have a 60-70 kDa protein core, are glycosyl phosphatidylinositol (GPI)-linked to the cell membrane, and due to their globular structure are restricted to HS-type GAG attachments. 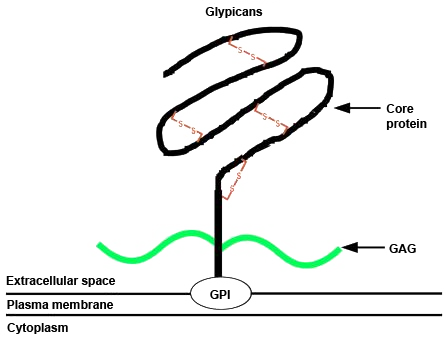 The protein is held in the plasma membrane by a GPI anchor at the carboxyl terminus. Numerous glycosoaminoglycan (GAG) attachment sites close to the membrane surface allow heparin and chondroitin sulphate chains to be attached to the core protein (shown in green). The amino terminal end of the protein is a globular structure held together by a conserved set of cysteine residues forming disulphide bridges. http://atlasgeneticsoncology.org/Genes/GC_GPC5.html

The six members of the vertebrate glypican family share a characteristic structure. Glypicans are anchored to the cell surface via a GPI linkage, have a conserved pattern of 14 cysteine residues, which contribute to intramolecular disulfide linkages, and display GAG attachment sites predominantly near the membrane. Alternative names and molecular weight of the core proteins are also indicated. http://www.rndsystems.com/Cytokine_cb08i2_GlypicansinCancer.aspx

Since glypicans act as co-receptors by facilitating the formation of ligand-receptor complexes and effectively lowering the required concentration of ligand, it is not surprising that they are expressed in the tumor environment. Glypican-1, -3 and -5 have all been associated with the tumorigenic process, mostly by affecting growth factor signaling and cell proliferation. GPC1 shows increased expression in human gliomas and glioma-derived cell lines, and acts by enhancing fibroblast growth factor (FGF) basic signaling and mitogenesis. Likewise, in pancreatic and breast cancer cells GPC1 is over-produced, and affects regulation of FGF basic and heparin-binding EGF-like growth factor (HB-EGF) signaling. Antisense depletion of GPC1 in pancreatic cancer cells also reduces their ability to form tumors in vivo. Another example of glypican-promoted proliferation of tumor cells involves GPC5. Its upregulation has a strong association with the appearance and increased cell proliferation of rhabdomyosarcoma, a malignant skeletal muscle tumor. The mechanism involves GPC5-mediated activity of FGF basic, hepatocyte growth factor (HGF), and Wnt-1.

What is Glypican-1and Its Role in Pancreatic Cancer?

The glypican-1 gene codes for a protein of 558 amino acids with a predicted molecular weight of 62 kDa. It is a cell surface, lipid-raft-associated heparan sulfate proteoglycan (HSPG), composed of a glycosylphosphatidylinositol (GPI)-anchored core protein substituted with a three chains of heparan sulfate near its C-terminus.

1 thought on “Circulating Exosomes for Early Diagnosis of Pancreatic Cancer”