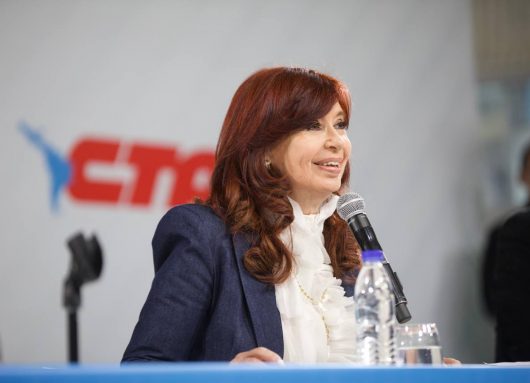 Argentina’s vice president miraculously avoided death after an assassin attempted to shoot her at point-blank range. Vice President Cristina Fernández de Kirchner was exiting her car in front of her house in Buenos Aires, when gunman Fernando Sabag Montiel tried to take her life, according to NBC News. However, Montiel’s gun jammed, and he was quickly disarmed by Fernandez’s security detail and the crowd of supporters.

The ordeal took place in the front of  Fernández’s home. She was greeting her supporters when her life was nearly taken. Videos show that the gun was mere inches from Fernández’s head when it failed to fire. Argentine President Alberto Fernández (no relation), stated in a national address “Cristina is still alive because, for reasons that have not been confirmed technically, the weapon, which was loaded with five bullets, did not fire,” according to Casa Rosada, the Office of the President of Argentina.

The nearly fatal incident has left Argentina in shock. In his address, President Fernández, declared the crime “…the most serious incident since we recovered our democracy.” The head of state made the next day a national holiday and called for the nation to show their support. Thousands of supporters lined the streets in solidarity and to protest violence that has plagued Argentina.

Montiel, who is in custody as the investigation continues, has been linked to far-right ideologies and Nazism. In a taken-down Instagram post, Montiel can be seen with a black sun tattoo, according to The Times of Israel. The symbol originated in Nazi Germany and is also known as the sonnerad, or the sun wheel. The Anti-Defamation League considers the black sun a hate symbol and considers the swastika a variant. It remains unclear exactly what Montiel’s motives were and whether they correlate with his far-right viewpoints.

Vice President Fernández, a member of the center-left Justicialist Party, is one of Argentina’s most prominent politicians. A former senator, she served as president from 2007 to 2015, before becoming Argentina’s vice president in 2019. She and the family of her late husband, former president Nestor Kirchner, are very influential in Argentine politics, with a son and sister-in-law among others in government positions. Recently, she was accused of corruption that took place during her time as president of Argentina. Prosecutors seek to jail her for up to twelve years, according to Reuters. Fernández denies the allegations.

The attempt also impacted Argentina’s sports scene. A total of three soccer matches were postponed due to the incident. In a statement, the Argentine Football Association said, “the [AFA] expresses its strongest repudiation of what happened with Vice President Cristina Fernández’s de Kirchner. We call on society, warning violence of this kind never ends.” Multiple other games were moved, including the women’s championships.

This is another recent example of violence on a political figure. Earlier this summer, Shinzo Abe, the former prime minister of Japan, was shot dead from behind with a hand-made shotgun while he was giving a speech. His death left Japan and the world in shock, especially since Japan is known for having strict gun control measures, according to TIME.

Fortunately, the attempt of Fernández’s life failed. However, many questions remain unanswered, such as the perpetrator’s motives, if he was part of a larger group, or if the incident is related to Fernández’s s alleged history of corruption. More information will be available as the authorities continue investigating the crime.