On April 5, the Center for Peace and Conflict Studies at the School of Diplomacy and International Relations held its third annual “All Conflict is Local: Personal Experience, Reflection, and Conflict Resolution” conference.

Professor Zheng Wang, the organizer of the conference and director of the Center for Peace and Conflict Studies, opened the discussion with a few remarks. Specifically, he emphasized the Center’s mission of highlighting students from around the world who have had “direct contact with conflict.”

Next, Dean Andrea Bartoli offered a few opening remarks about conflict, which he described as a “[fundamental] human choice.” When talking about traumatic events and conflict as a choice, Dean Bartoli went on to say, “Conflict doesn’t happen to us, we choose what to do with conflict.” He then concluded by calling attendees to open their minds and hearts to experiencing what others have lived through when listening to the presenters, because he believes active listening to be the heart of diplomacy.

Oluwagbemiga Oyeneye began the first round of presentations. His presentation, titled “Religion, Morality, and Healing,” focused on sharing and reflecting on the ethno-religious conflict in Plateau State, Nigeria. He explained that the title of his presentation, “Are they for us or are they for them?” is often the rallying cry used to polarize the sides of the conflict — and also a question one may be asked that will determine whether their life will be spared or taken upon invasion of their village.

Oyeneye shared that the conflict over land ownership, particularly of Jos — which is between the Muslim Hausa and indigenous populations —has affected him on a personal level by preventing his contact with friends who are members of other groups. For example, he can no longer visit with his Muslim friends, who he once lived peacefully and prayed with, for fear of death if he were to step into their village. He emphasized that the silent killings and disappearances of people who mistakenly walk into communities opposite their identity remains common.

After Oyeneye finished this presentation on Nigeria, Meagan Torello switched gears to talk about the legacy of conflict in Northern Ireland, which she studied while living abroad there. In her presentation, Torello described the socioeconomic forces that protracted the polarization between Protestants and Catholics, particularly the discrepancies in education levels (Catholics are disproportionately better educated, leading to better opportunities for their community, but the disenfranchisement of Protestants).

In her studies, however, she found that the current state of the conflict indicates a “great level of self-reflection and healing.” She recounted a particularly moving story, where she interviewed two men: one whose best friend had been killed by the other. She encountered both interviewees at the same time, and was surprised to find that instead of conflict breaking out, the two men hugged.

Next, Michael Hamilton gave an insightful presentation on the Golden Rule, which he described as “not a maxim of timeless wisdom, but of existential consideration.” He emphasized that the Golden Rule — “do to others what you want them to do to you” — exists in some iteration in nearly all religions’ ethical foundations. He believes that inherent disrespect of the Golden Rule bodes all conflict, particularly the current wave of divisive nationalism. He ended on a positive note, though, describing humans as capable of returning to Golden Rule reciprocity: “we are fallible, messy, yet extraordinary.”

The final presenter in the first panel was Emanuel Hernandez, who spoke on the urban-rural divide in Colombia. His presentation was particularly unique, in that it focused on conflict that is widespread — 5.7 million people have been internally displaced in Colombia as a result of systemic violence — but widely unheard of, especially among more affluent people living in the urban areas. The main takeaway of his presentation was that advocacy is the most promising avenue of bridging gaps in understanding and experiencing conflict, and that the Jesuit presence in Colombia has been particularly integral to advocacy efforts.

The second panel, “Domestic Conflict, Justice and Sustainable Development,” featured three presenters: Erick Agbleke on conflict in Togo in the 1990s, Kristal Corona on restorative justice in Cambridge, MA, and Pallavi Shahi on India’s sewage system workers. Agbleke began the discussion, recounting his family moving to Ghana to escape an 8-hour military rampage after the Togolese government changed, and in particular, to help his father avoid having to take on the role of primary bodyguard of the reappointed prime minister, Koffigeh.

Corona brought the discussion back to the United States, where she talked about how restorative justice as an alternative to punitive measures encourages people — particularly young, at-risk students — encourages releasing aggression and anger in healthy, productive ways. According to Corona, restorative justice prevents mass incarceration, and gives disenfranchised students a chance at leading better lives.

Finally, Shahi shed light on the sewage workers of India, individuals from India’s lowest economic strata that clean the sewage systems at low pay and grave danger to themselves. She emphasized the Indian legal system’s failure to address the issue when sewage cleaning was made illegal; instead of eradicating the work, the Supreme Court’s decision to make sewage work illegal has only erased workers’ rights and complicated the compensation mechanism for those who have died from noxious chemicals. Because of this legal limbo, sewage workers have become the “new age untouchables.”

At the end of the presentations, Professor Hugh T. Dugan, the moderator of this panel, gave a profound answer summing up the takeaways of the conference: “The status quo is unacceptable. We need more consequences [for injustice]. We reward market disruptions in Silicon Valley; we must think about [how to award] disruptions in other fields.” 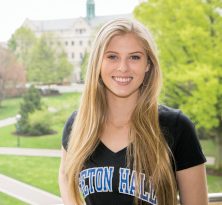