The discussion began during halftime. Dean Andrea Bartoli welcomed students and spoke about the 20th anniversary of the School of Diplomacy, which will be during the 2017-2018 academic year. Branding the celebration as “Diplomacy 2.0,” Dean Bartoli reflected on the changes and transitions that have occurred over the School’s history. He hopes that the School of Diplomacy will soon become a member of the Association of Professional Schools of International Affairs (APSIA). The School of Diplomacy is currently an affiliate member of APSIA, rather than a full member. APSIA brings together leading international affairs schools around the world, and assists members and affiliates by gathering information and sharing ideas.

Membership in APSIA would greatly benefit the School of Diplomacy, attracting future students to the School with the reputation and prestige that membership brings. Current students and alumni would have lifetime access to job postings and career fairs exclusive to APSIA members. Additionally, APSIA offers several fellowships and scholarships.

Dean Bartoli also expressed a desire to increase the amount of space owned by the School of Diplomacy. Most School events are held in the Diplomacy Room, and problems arise when multiple events are to be held at the same time, or if an event requires more space. He proposed the creation of a lounge where students can meet and work with classmates and faculty. Ideally, all these new spaces would be in the same building to create a sense of community.

Taylor Cain spoke about the penny war hosted by Seton Hall’s chapter of No Lost Generation, an organization committed to bringing attention and providing aid to children affected by the Syrian refugee crisis. Seton Hall’s chapter will be competing to raise more money than the Rutgers University chapter from April 3 to April 7. Students interested in No Lost Generation can contact Cain at taylor.cain@student.shu.edu for more information.

Madison McHugh, president of European Horizons, announced that the organization has received SGA recognition as an official club on campus. She also announced that Leah Cerilli will be attending the European Horizons’ Spring Security Forum in Washington D.C., and will lead a conference group on NATO, Common Security Defense Policy, and European humanitarian interventions. European Horizons is a think tank with over 30 chapters in the United States and Europe, dedicated to setting a European policy vision for the future. She encouraged students interested in discussions, debates, and both national and international conferences on transatlantic relations to attend meetings on Mondays at 5 p.m. in the Diplomacy Room. Club members are offered the opportunities to attend conferences on Transatlantic relations taking place in the United States and Europe. 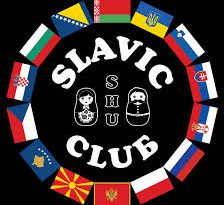 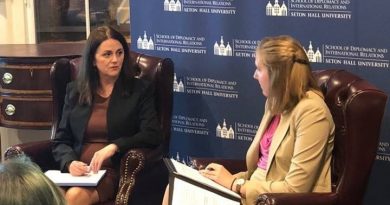