The crisis in Syria has been covered extensively by international news outlets since the summer as well as talked about extensively on social media. As public opinion about Syria grows, one of the questions gaining relevance is how accurately the news depicted the situation and how people are reacting to the refugee crisis online. On October 29, Seton Hall’s Students for Justice in Palestine (SJP) hosted a panel discussion aimed at dissecting the happenings in Syria. Part of the concern that motivated the creation of the event was precisely the lack of (or poor) awareness by mainstream society. Panelists Edina Skalijc, who was a refugee from the Bosnian genocide and one of the leaders of the I Am Also a Refugee campaign, and Qutaiba Bakeer Agha, who was in Damascus when Arab Spring broke out, sat with The Diplomatic Envoy and shared their views on the issue of awareness and issues they saw with how the refugee crisis is being presented by the media and on social media.

According to Skalijc, there are several reasons why most Americans may be misinformed about what is actually happening in Syria. The main reason is that American news consumers just began paying attention to Syria despite the fact that the events that led to the current situation started nearly five years ago. “People just started tuning in. They’re coming late into the game and not doing the research in terms of how all this started. Major media outlets basically presenting information as if this conflict started just when the refugees started coming to Europe, which is completely false.” Co-panelist Bakeer Agha further explained that the amount of coverage the news has received is equally important. He pointed to the fact that the coverage that has been given to the situation has not covered “more than 9 or 10 percent of what is really happening on the ground.”

Another important reason that adds to why so many Americans are confused about the Syrian crisis is the way ISIS is factored into it. Attacks made by ISIS are taking the spotlight that the deaths of the Syrian people and American soldiers in Syria should be occupying, and obscuring some people’s perception of the crisis and its sources. Bakeer Agha pointed that “there is less coverage on Assad’s crimes.” He explained that, as a Syrian, he does not see what is happening fully represented in the media, and that the coverage that has been given to the crisis is the equivalent of treating cancer with aspirin.

An integral element of the misrepresentation of the situation has to do with its naming. In international relations, it is the norm that once states have identified a crisis or a conflict, they are compelled to take action against it. The same concept holds in the Syrian case. If a state acknowledges people as refugees, it has a responsibility to treat them as such, for the term implies an imminent threat to life generally caused by war. Therefore, the media has been inconsistent in how it discusses the refugees only serving to confuse the public further.

Despite the misrepresentation and lack of accurate information, both panelists stressed that things can get better. They urged the attendees to become involved with local organizations that support the Syrian cause. Referencing her own experience as a refugee, Skalijc highlighted the importance of staying actively engaged and helping so people in need know that someone cares. Referring to a picture, she noted that as a child in a refugee camp she received a red sweater that made her incredibly happy because it was the only new thing she had gotten since she and her family had escaped from Bosnia. The sweater came from charity and, though she didn’t know where it came from, it meant a lot to her as it meant that someone, somewhere understood she was there.

Also reminiscing on his own experience as an Assad prisoner, Bakeer Agha highlighted the importance of being a voice for those that cannot speak up. He mentioned how often times freedom of speech is taken for granted in the U.S. For him, it was growing up in a society where such right is not necessarily respected which made him become an advocate for the cause. Despite their ups and downs, both Skalijc and Bakeer Agha agree that we can all do something to help the Syrian situation get better, even if it is just speaking about it and raising awareness for what is going on using social media. 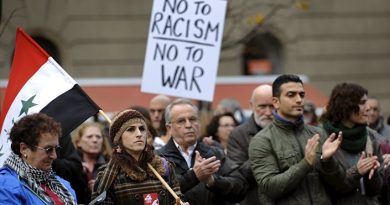 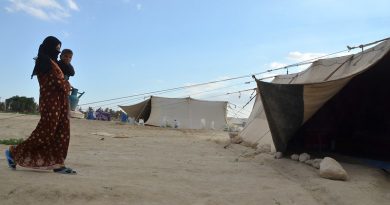 Focus on Civilians in Conflict: Women and Children