The negative implications of living in a surveillance society regarding democracy have been seen, particularly during the January 6th insurrection. Facebook allowed the “stop the steal” MAGA supporters to organize on their website because it made the company a significant amount of money. 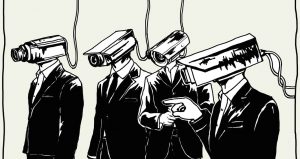 This conveys the idea that surveillance is detrimental to society, particularly due to the fact it puts profit over democracy. Surveillance and the collection of big data has put our democracy under threat in a way that many did not foresee. After January 6th,  the demand for stricter regulations among big tech companies and their use of data has never been higher. Facebook is currently under scrutiny for their alleged role in the January 6th insurrection, and have single-handedly proven just how much power big tech has with the potential of destabilizing our democracy and altering our way of life.