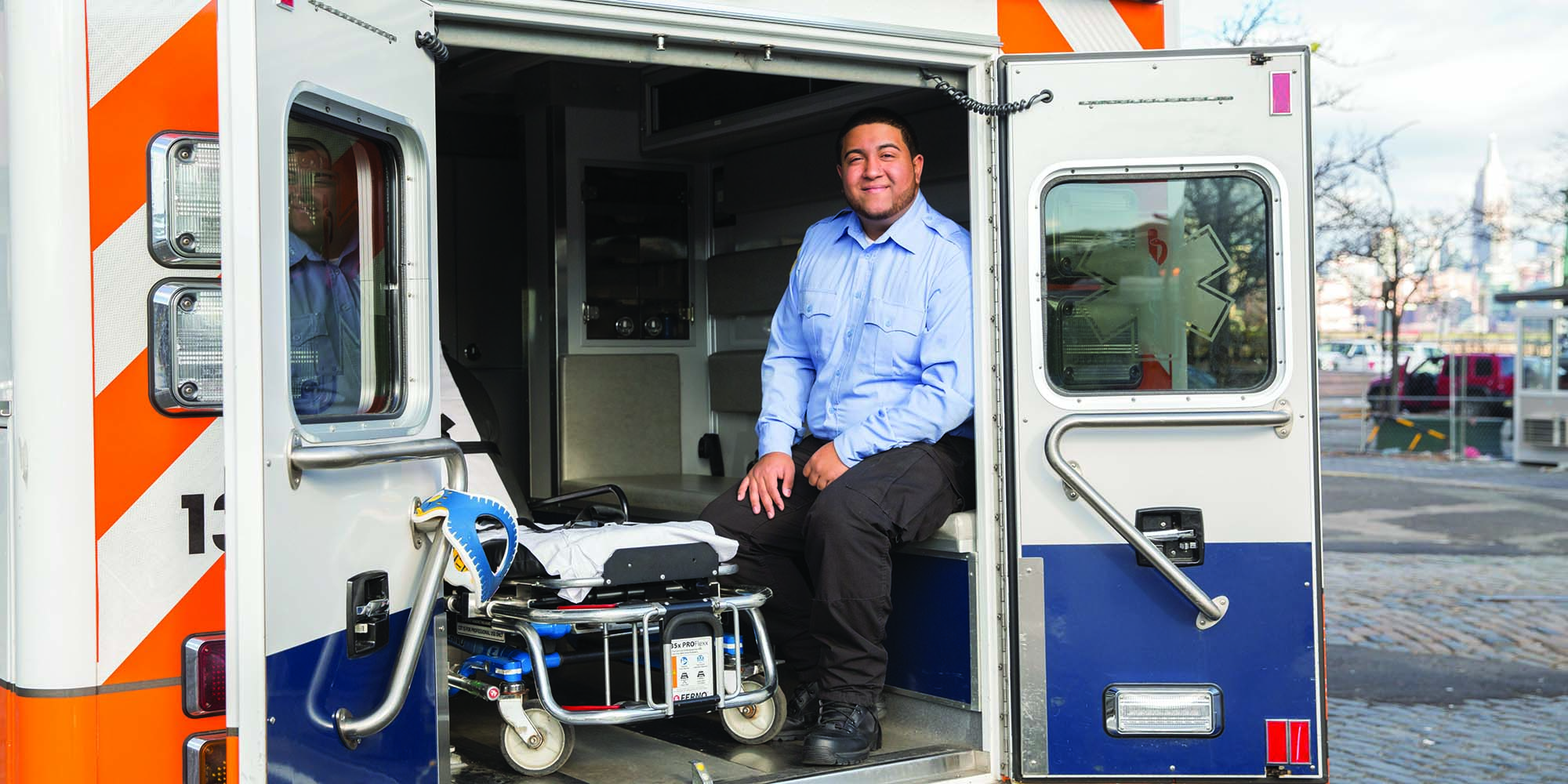 Where There’s a Need…

Jeremy Garriga is drawn to providing assistance where it’s needed.

When a New Jersey Transit train smashed into the Hoboken station last month, killing a woman and injuring more than a hundred other people, Jeremy Garriga called his professors, jumped in his car and sped east.

Garriga, an emergency medical technician, remembers a “very crazy” scene when he arrived at the crash. “A hundred people were lying on the floor,” he says, but the damaged terminal building had to be secured before anyone could go in and help. Once cleared for entry, Garriga and other emergency responders got to work, treating injuries and transporting people to local hospitals.

A 20-year-old junior majoring in social and behavioral sciences, Garriga has been an EMT since 2013. In addition to regular EMT shifts, he balances a host of volunteer and nonprofit work with his courses at Seton Hall.

But he began helping people long before he came to campus — “even prior to when I was born,” he says, when his pregnant mom walked in the March of Dimes. Soon Garriga joined those marches in a stroller. He and his family pitched in with National Night Out, breast cancer walks, Christmastime toy drives. Together they delivered food to people in need on Thanksgiving and served dinner in a soup kitchen on Christmas.

Then, as a freshman in high school, Garriga volunteered at a homeless shelter for the first time. By the end of his first day, he had come up with a new project.

“I asked the [shelter] director what else I could do to help,” he remembers, “and she told me socks were the most necessary item, but the least donated.”

Since people aren’t allowed to stay in the shelter during the day, they do a significant amount of walking. Without fresh socks and easy access to health care, that walking may cause blisters and foot infections, even gangrene, which can spread to the rest of the body. “They could die just from not having a clean pair of socks,” Garriga says.

He founded Soxcess in 2011, and the initiative has since given out more than 10,000 pairs of socks and other basic necessities, gathered from collection bins and also local Target and Lush Cosmetics store donations.

Teresitia Walters-Rogers, a student development specialist at Seton Hall, remembers interviewing Garriga for the Educational Opportunity Program a few years into his Soxcess efforts. He told her he was looking for a college where he could continue serving the community. “I smiled,” Walters-Rogers says, “because I thought about how big Seton Hall is on servant leadership. I reassured him he was in the right place.”

As Walters-Rogers had predicted, Seton Hall helped Garriga take his service even further. He’d long thought about volunteering outside of the country, and in May 2015, Seton Hall University Medical/Public Health Brigade offered the opportunity.

Garriga traveled to Honduras with the group. They set up in the mountain town of Buena Vista — a place so high up and with such limited transportation that a trip to the doctor or dentist requires an hours-long trek through the mountains on foot.

With the Seton Hall Brigade, Garriga helped licensed doctors see more than 800 patients in only a few days. He assisted with cavity fillings, worked in the pharmacy and triage, and consulted with patients.

Garriga says that every one of these volunteer efforts — the EMTing, Soxcess, the Brigade trip — has further fueled his dream of becoming a doctor. He plans to pursue a nursing degree after graduation and continue on to medical school after that.

For Garriga, there’s no worse feeling than being unable to help. In fact, as he talks about the recent train crash, he remembers four years earlier, when another tragedy hit New Jersey and he couldn’t rush to the scene. He’d thought about becoming an EMT before Hurricane Sandy, but he says watching the hurricane’s damage on TV — and seeing first responders save lives — encouraged him to start the training process.

“I like being able to know that I can make a difference, and I don’t like to be unprepared,” he says. “When something happens, I want to know exactly what to do.”