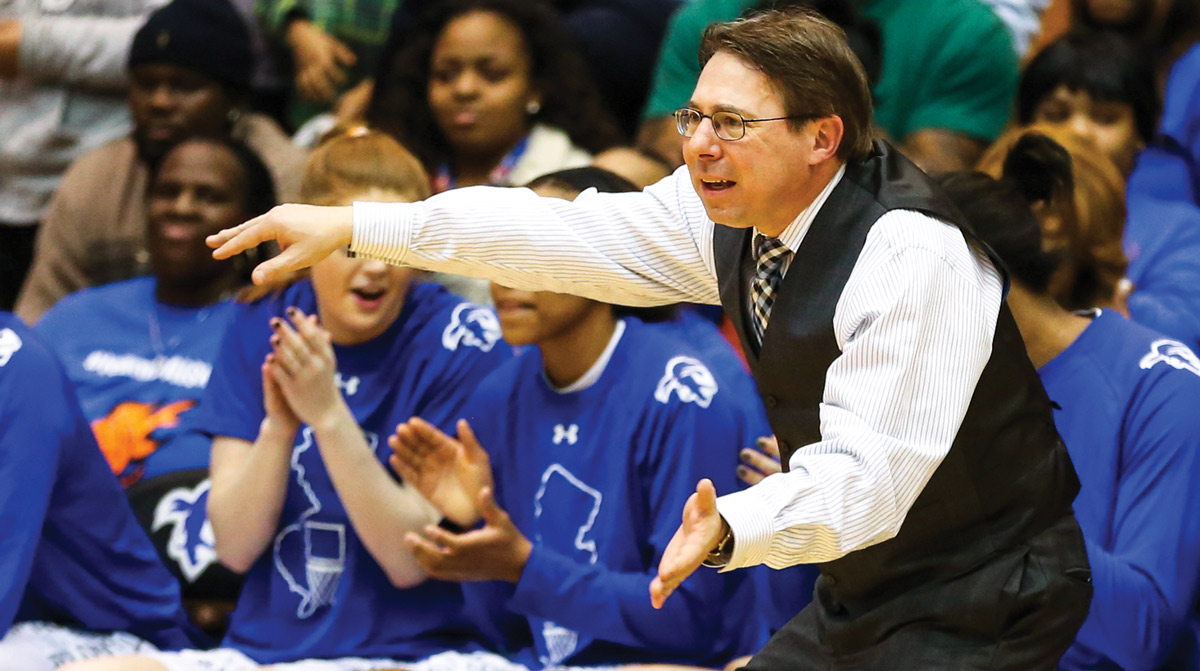 Tony Bozzella ’89 uses his credentials and location when he sells the Seton Hall women’s basketball program to recruits. He talks about his up-tempo offense and his reputation as a players’ coach. He points to his record of turning struggling programs into winning ones. And he promotes Seton Hall itself — the academic and athletic facilities, its proximity to New York City, its business school, and the University’s “people who care. We would never have this success without other people outside of athletics.”

One reason he’s successful at pitching the virtues of Seton Hall as a coach is because he experienced them as a student. A native of Glen Cove, N.Y., Bozzella came to Seton Hall thinking he’d start his own business after school. Instead, he developed a desire to coach. But if he coached somewhere else today, “I don’t know how much passion I’d have” selling that school. “I wouldn’t believe in the education and school the way I do for Seton Hall. I mean, I went here!”

Bozzella’s Seton Hall journey, which started more than 30 years ago, culminated with his return in 2013. He came back determined to transform the Pirates into contenders. In two seasons he’s done just that — the Pirates won their first regular-season BIG EAST title in 2015 and made the NCAA Tournament.

“Ultimately, for me, this is a place where I’ve always dreamed of going and a place I dream of ending my career,” he says. “Hopefully many, many years from now.”

Bozzella wants that sentiment on the record, believing Seton Hall is the perfect place for him. But Bozzella is also a perfect fit for Seton Hall, someone with a deep understanding of the campus culture and the people. On one job interview, Bozzella sat in the cafeteria “because I wanted to see the type of student body we had, and it was very familiar to me.”

Bozzella talks a lot about family — from the extended Seton Hall community to his own. He met his wife, Maria, during their student days, and their daughter, Samantha, is a walk-on guard for the Pirates.

But family ties and feel-good homecomings only go so far in athletics — Bozzella felt pressure to produce immediate results.

“I said to our staff, ‘No matter what it takes, extra work, extra film, we have to win games,’” he says. “I knew if we didn’t do well right away, people were going to be like, ‘You know what? Seton Hall can never win. They’re doomed to lose.’”

Bozzella has a history of resurrecting struggling programs. At Southampton College of Long Island University, which had never enjoyed a winning season, he had a winning record in his third campaign and a 20-victory season in his final one. A similar turnaround happened at Long Island University. And at Iona, a program that went through 20 straight losing seasons, Bozzella had three seasons with at least 20 victories. 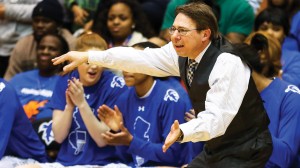 That took time at Seton Hall with players like point guard Ka-Deidre Simmons ’15, who was concerned about a mid-major coach taking over a BIG EAST program. But Bozzella — “Coach B,” Simmons calls him — won the team over. He gave Simmons control of his attacking, fast-paced offense, and she made the all-conference team while averaging 17 points per game as a senior.

The team’s success energized the campus. “My first two years, nobody knew about the seasons we had,” Simmons says. “I don’t think they even knew where the gym was.” But in her final two years, “It was crazy. Every single person is like, ‘Great year, great season.’ ”

Now Bozzella focuses on taking Seton Hall to another level, one where NCAA Tournament appearances are commonplace. The players and Bozzella expect to win. But winning at Seton Hall is different, even more special. “This is where I grew up,” he says. And for Seton Hall, there was no better place for Bozzella to end up than back where it all started.