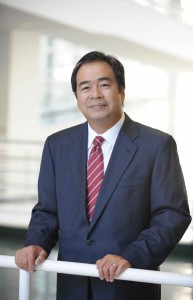 A. Gabriel Esteban brings a unique perspective to his new position as interim president of Seton Hall. Because he had been provost — the University’s chief academic officer — he has a thorough grasp of what’s needed to educate and form future servant leaders. But as the parent of a Seton Hall junior, his perspective is both deeper and more personal. He has said he views his term as interim president as an opportunity to move Seton Hall forward academically and strategically. Seton Hall magazine sat down with him recently to learn more about how he sees the University evolving — in the short term and over time.

Would you name a few key goals for the university?
One objective is to increase student selectivity: SAT scores, academic preparation and so on. This year our SAT average increased by 27 points on the two-part test.
So not only do we have the largest class in 30 years, but our SAT average also went up.
Over the next five to seven years, we aim to increase that score by 100 points and increase the average GPA of our students, which will help retention and graduation rates.

We are also starting to invest selectively in areas of strategic priority. This past year we developed scholarships for business majors through the Stillman School of Business. To strengthen our Catholic identity, we also developed a scholarship for graduates of Catholic high schools.

What strengths does the University draw upon?
We already have a strong academic base. We also have a strong student profile. The question is: How do you get to the next level? We’re trying to set goals that on the surface may be slightly out of reach; that’s the only way you move forward.

The most successful students are those who find something they’re passionate about. They don’t really worry about the rewards.
One of the great reads I had this summer was a book assigned to our incoming class — Mountains Beyond Mountains by Tracy Kidder. It included a number of servant leaders: Paul Farmer, a doctor and co-founder of Partners in Health, who basically lived nine months of the year in Haiti. He saved millions of lives – one at a time.

There was also Thomas White, a contractor who built one of the largest construction companies in Boston. His goal in life was to give away all his wealth. I did some research and found that White’s goal had been fulfilled. How many of us have the courage to be that kind of servant leader?
Servant leaders who find their passion and find out how they can make a difference in this world — that’s what we want.

How can alumni and friends of the University help?
In a number of ways: Our goal is to enroll the best students from across the country. Alumni can play a key role in that. Someone from enrollment services might call and say, “I have three students in your city interested in Seton Hall. Can you help by calling them? Can you host a student event?”
Another way to help is by giving to the institution.

One area we can improve upon is our alumni giving rate. The latest report says we’re at about a 9 percent giving rate, significantly less than our peers.
Any alumni who feel Seton Hall provided value to them during their time here should seriously consider giving.

I know these are difficult economic times but a check for just $25 a year can make the difference. Students today face more pressure than ever, especially financial.

How would you like Seton Hall to be known in five years?
In my view, it will be the institution of choice in this part of the country. If someone is looking at a university whose values align with the Catholic Church, I hope Seton Hall will be in the top three on their list, if not number one.