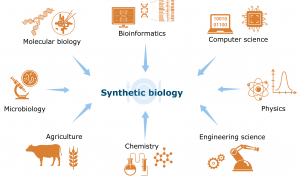 Synthetic biology is a new industry within the science field that incorporates aspects of engineering and computer programming and merges it with biology. Rapid advancements of technology is allowing humans to merge their bodies with this technology for maximum health and efficiency. For example, instead of humans and animals having to take medication in the future, immune systems will be equipped with the right coding to fight off pathogens entering the body. The scope of synthetic biology within the science field ranges from reprogramming of antibodies to regrowing a lost limb, to consuming meat that is grown in a lab, to altering DNA to eradicate pre-existing conditions (CRISPR, unveiled in 2012). The extent to which it spans in society is indefinite. There are innumerable social, political, economic, environmental, and technological effects, some of which may cause irreversible damage. Stakeholders of synthetic biology include physicians, scientists, farmers, government workers, Big Pharma, and every citizen being impacted by these changes. It is difficult to presume that there is not one person who will not be affected by gene editing in the future, whether that be in the agricultural or medical industries, or simply as an effect of climate change.

Developing trends of synthetic biology include the usage of mRNA vaccines, SNP profiling, organoids, assembloids, molecular innovations, and genetic modifications, for example. The first mRNA vaccine was approved by the FDA for usage in 2020 with the COVID-19 vaccine. According to the Association of American Medical Colleges, the COVID-19 vaccine is just the beginning for mRNA vaccines, especially because they take less time to test and develop, and cost less as well. SNP (single-nucleotide Polymorphism) Profiling is the practice of changing a fetus’ DNA while still developing in the mother’s body, which first began in studies in 2010. The effects of this practice can range from designing a specific eye color to eliminating developmental disorders, according to parents’ wishes. Xenotransplantation by organoid development is the procedure of taking stem cells from a host and using them to grow organs in a lab. This is revolutionary because it eliminates the threat of transplant rejection since the DNA in the organ is the same sequence. (This is especially important today due to the organ donor shortage.) The first organoid of the brain was constructed in 2008, which has since led to increased research of brain disorders such as Autism and Schizophrenia. Assembloids are three-dimensional models of biological tissue that incorporate different cell types, that were first created in 2017. These are similar to organoids regarding the fact that they are organs developed from human stem cells outside the body. However, the emerging trend of creating assembloids is critical to research on different types of diseases and human development because scientists are able to monitor and study how cells grow and develop over time.

Opportunities for molecular innovation trends include molecule discovery, altering the contents and storage of DNA, and engineered animals for human benefit. Molecular biology first began in the 1930s, and has evolved by human demand to discover new ways to attack certain diseases. Discovering new molecules is crucial to the creation of new medicines, or in this case, immune system development. To be able to alter DNA, for example, (as mentioned previously) needs new molecules to form new genetic sequences. The first DNA was altered in 1973, which then led to the discovery of restriction enzymes and DNA ligases. If human DNA is developed to the capacity of being able to hold “…roughly a million terabyte-sized hard drives,” in the future there is going to be no limit on how much big data humans can store themselves. Lastly, engineered animals are a great example of incorporating synthetic biology not just within the human body but in their environment as well. Lab-grown animals will benefit the environment because they will contribute less to the carbon accumulation in the atmosphere. This, in turn, will aid tremendously in the race to fight climate change.

A few of the industries and markets that are going to be impacted the most in the future by synthetic biology are big Pharma, biotechnology, surgical and agricultural markets. Big Pharma will be impacted because if humans are given the ability to become immune to diseases and viruses in a one-time procedure, there will be no need for the mass production of drugs. On the other hand, if drugs with specific molecular makeup are produced, then there would be an influx of demand. Therefore, biotechnology is going to have to take a new approach to create human immunity in the future. There will also be a large impact on the biotechnology industry because of the creation of new mechanics to be able to complete the processes mentioned above.

However, with this great knowledge and ability comes the threats of hacking. Scientists are going to have to be wary of who genetic information is shared with and will have to come up with several precautionary measures as well to protect big data. Government agencies will have to be created to protect citizens on a widespread scale. Surgical markets will be impacted because surgery, as it is today, will be completely different ten years from now. Will surgery even be necessary if scientists can inject humans with a molecule that will fix the problem for them without having to slice open a patient? Most likely. Lastly, the agriculture industry will be changed as a result of farmers being able to enhance the nutrient production and yields of crops and trees by using gene-editing tools. Wouldn’t it be more convenient if apples didn’t brown as fast as they do? This is just one example of how gene editing can transform the agriculture industry.

The timeline of different synthetic biology inventions stems from research in the early 1900s (as previously stated) and continues exponentially to this day. To be able to recognize the disruption effect of just one scientific creation is to understand the personal and global impact of current technological innovations.