Anti-CD38 monoclonal antibody daratumumab (Darzalex) is indicated for the treatment or patients with multiple myeloma that have failed prior treatment. CD38 is a

transmembrane glycoprotein (48 kDa) expressed on the surface of hematopoietic cells, including multiple myeloma and other cell types and tissues and has multiple functions, such as receptor mediated adhesion, signaling, and modulation of cyclase and hydrolase activity. Daratumumab is an IgG1κ human monoclonal antibody (mAb) that binds to CD38 and inhibits the growth of CD38 expressing tumor cells by inducing apoptosis directly through Fc mediated cross linking as well as by immune-mediated tumor cell lysis through complement dependent cytotoxicity (CDC), antibody dependent cell mediated cytotoxicity (ADCC) and antibody dependent cellular phagocytosis (ADCP). A subset of myeloid derived suppressor cells (CD38+MDSCs), regulatory T cells (CD38+Tregs) and B cells (CD38+Bregs) are decreased by daratumumab.

We have reviewed its mechanism of action in depth, previously. 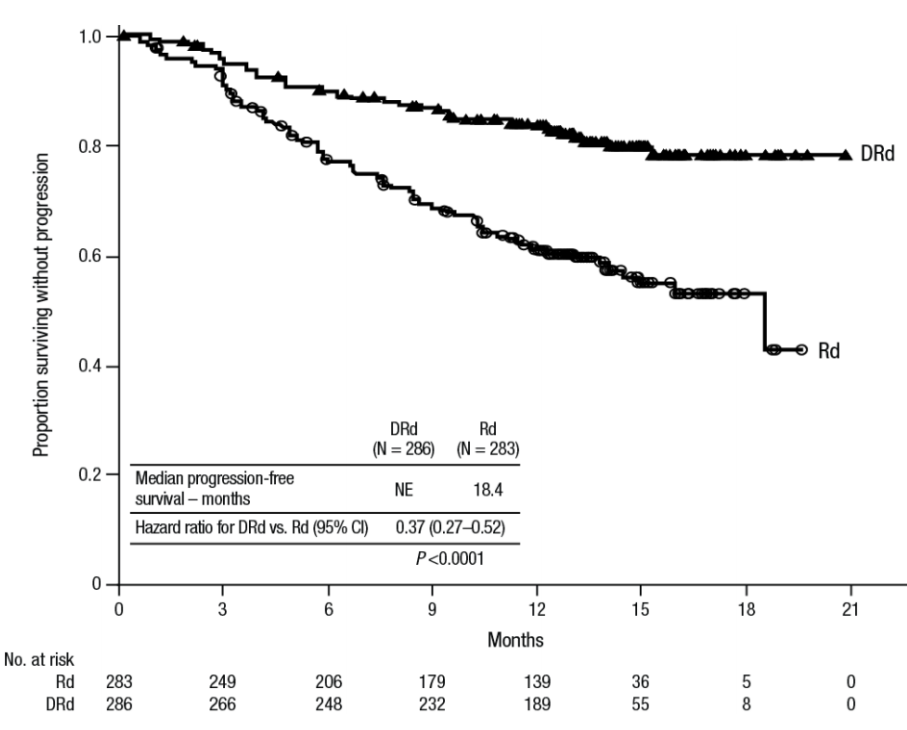 Given the impressive results in second-line, investigators sought to evaluate daratumumab in front-line therapy for multiple myeloma. Front-line treatment includes bortezomib, a proteasome inhibitor that is especially effective in multiple myeloma – it acts by blocking the proteasomal degradation of misfolded proteins and IkB, which inhibits NFkB. In addition to inducing apoptosis by blocking the turnover of misfolded antibody proteins by the proteasome, bortezomib is effective in myeloma cells, due to the specific effects of NFkB – (1) it controls genes for VEGF and adhesion molecules; (2) induces the secretion of autocrine growth factors IL-4 and IL-6.

From a safety perspective,

the addition of daratumumab was achieved without creating any new safety signal. Infections that occurred more frequently among the patients getting daratumumab resolved. The risk of Grade 3 or Grade 4 neutropenia, thrombocytopenia, or anemia was similar in both treatment arms, but there was a higher rate of pneumonia in patients treated with daratumumab (11% versus 4%).

Does this represent a new front-line standard of care?

While these data establish daratumumab-VPM as the new standard of care in transplant-ineligible patients in Europe and Latin America, whether the results will translate in the US, so to speak, is unclear because VPM is not the standard of care here. In order to address this, there are ongoing studies testing front-line daratumumab with other regimens for multiple myeloma.