Selinexor (KPT-33) is a drug that inhibits exportin 1 (XPO1 and CRM1), a nuclear transport protein that shuttles nuclear proteins through the nuclear pore and is responsible for the removal of proteins from the nucleus:

XPO1mediates the export of over 220 different cargo proteins, including some growth regulatory proteins and the vast majority of tumor suppressor proteins. Moreover, XPO1 appears to be the only nuclear exporter for key tumor suppressor proteins, including…p53, p73, FOXO, pRB, BRCA1 and PP2A…and the anti-inflammatory protein IkB, which inhibits NFkB (Figure 1). 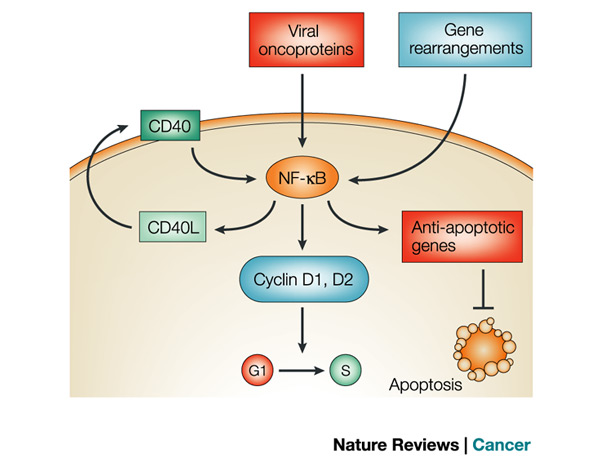 Figure 1. Nuclear factor of kappaB (NF-kappaB) can be constitutively activated in myeloid and lymphoid cells in response to growth factors and cytokines or the expression of certain viral oncoproteins. Persistent NF-kappaB activation can also be brought about by chromosomal rearrangements that affect genes that encode NF-kappaB or inhibitor of kappaB (IkappaB) proteins. Once NF-kappaB is activated, it can lead to the production of cytokines and growth factors, such as CD40 ligand (CD40L), that further propagates its activation. It also activates the transcription of cell-cycle regulators, such as cyclins D1 and D2, which promote G1- to S-phase transition, or inhibitors of apoptosis, such as BCL-XL, cIAPs and A1/BFL1. http://www.nature.com/nrc/journal/v2/n4/fig_tab/nrc780_F3.html

Disruption of XPO1 functioning is an excellent strategy treatment of cancer – accumulation of tumor suppressor proteins in the nucleus should overwhelm the transcription of oncogenes, thereby suppressing expression of the cancer phenotype (Figure 2). XPO1 has been shown to be particularly important in cancers driven by KRAS mutations, for example, lung cancer: 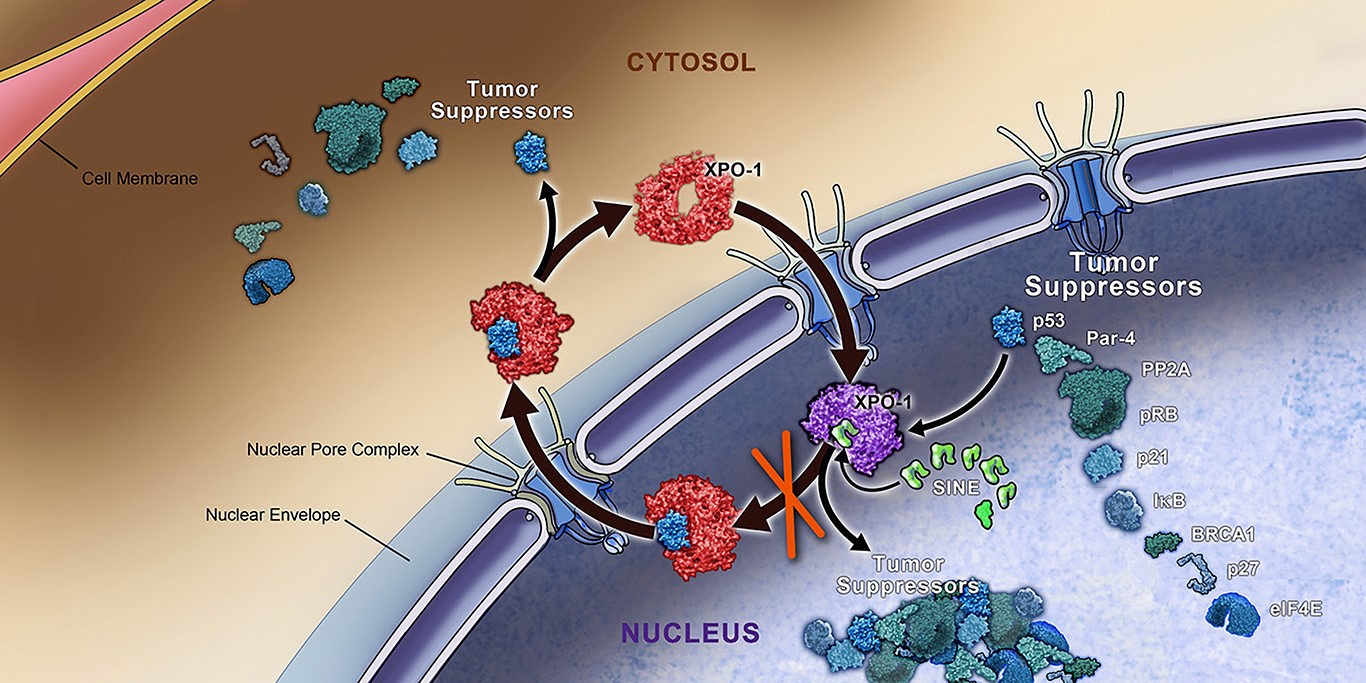 Figure 1. A drug that blocks the activity of the nuclear export protein XPO1 shrank tumors in mouse models of non-small cell lung cancer with mutations in the KRAS gene.
Credit: Karyopharm Therapeutics

A phase 1/2 trial of selinexor with docetaxel for non-small cell cancer (NSCLC) will be initiated in the future:

Selinexor will be administered once weekly starting one week before chemotherapy initiation (to permit pharmacodynamic assessment of selinexor alone and in combination with chemotherapy), in combination with docetaxel. Docetaxel will be given once every 3 weeks. Treatment will be administered in 21-day cycles. Dose limiting toxicities (DLTs) will be assessed based on the first cycle (7-day lead-in plus 21-day cycle = 28 days) toxicity using the National Cancer Institute (NCI) Common Terminology Criteria for Adverse Events [NCI CTCAE] version 4.03. A standard 3 + 3 dose escalation paradigm will be used.

In a phase 1 study of selinexor in 95 patients with relapsed or refractory AML, objective responses were seen in 11 of 81 evaluable patients (14%) and 25 patients (31%) had at least a 50% reduction in bone marrow blasts. Progression-free (PFS) and overall survival (OS) were significantly better among responders than non-responders: median PFS 5.1 months versus 1.3 months (p = 0.008) and median OS of 9.7 versus 2.7 months, respectively. Twelve patients had 89 serious adverse events – fifteen were judged to be at least possibly related to selinexor, including two fatalities: one from a decreased ejection fraction and for from respiratory failure and infection.

The SOPRA (Selinexor in Older Patients with Relapsed AML) was a randomized study comparing selinexor with investigator’s choice of therapy (control) in 176 patients with relapsed/refractory AML after a median of two prior regimens. The rate of complete response (CR) or CR with incomplete recovery of blood counts (CRi) was 13% in patients randomized to selinexor versus 3% for control, however, there was no significant difference in OS.

Karyopharm will be focused largely on the use of selinexor in multiple myeloma, diffuse large B-cell lymphoma, and liposarcoma.

1 thought on “Inhibition of Nuclear Export Protein XPO1 in Cancer”