Neratinib is an irreversible tyrosine-kinase inhibitor of EGFR (epidermal growth factor receptor), as well as HER1, HER2, and HER4. It is being developed for patients with breast cancer. It blocks many signal transduction pathways that result in proliferation and invasion, leading to cell cycle arrest and apoptosis. (Figures 1 and 2). 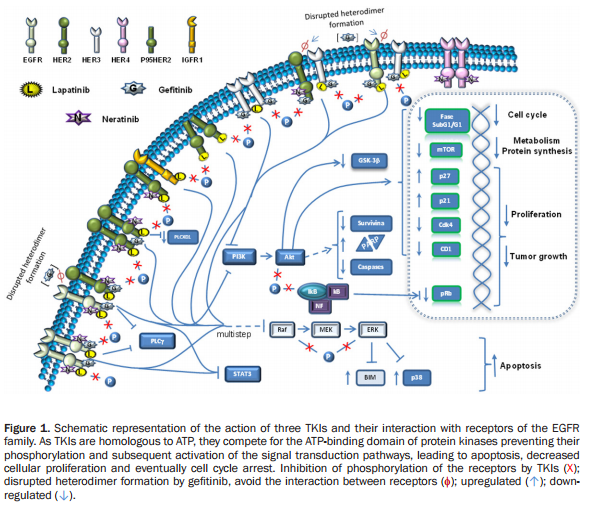 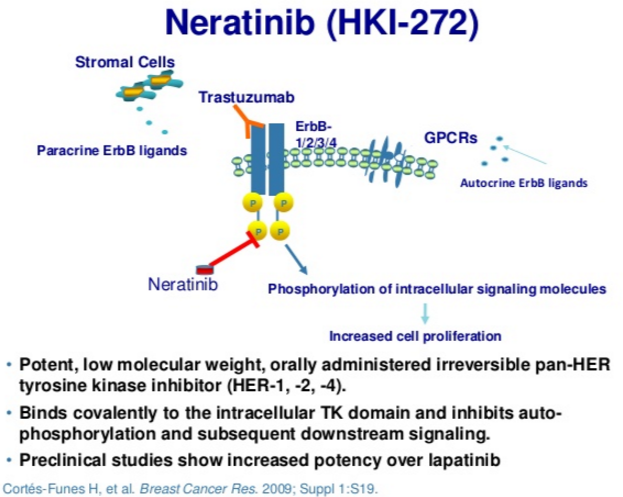 Preclinical studies of neratinib – rationale for combining with trastuzumab

Neratinib targets tyrosine kinase activity at the intracellular domain of the HER receptors (EGFR, HER2, and HER4), whereas trastuzumab targets the extracellular domain of HER2. This difference in mechanism of action would explain the improved response when both drugs are combined, since trastuzumab can induce ligand-dependent activation of HER receptors, whereas neratinib inhibits the phosphorylation and activity of HER receptors. Indeed, it has been shown that neratinib can overcome trastuzumab resistance in vitro. It was reported that neratinib was able to suppress ligand-stimulated HER2–HER3 dimers and could effectively disrupt preformed HER2–HER3 dimers in non-HER2-overexpressing MCF7 cells more effectively than lapatinib. Additionally, both TKIs decreased internalization of the HER2 receptor from the cell membrane, leading to increased trastuzumab-induced antibody-dependent cellular cytotoxicity. It has been shown that during trastuzumab treatment and resistance, HER4 cleavage and its translocation to the nucleus was increased; and nuclear HER4 was associated with a poor prognosis. However, cotreatment with neratinib decreased trastuzumab-induced nuclear HER4 in vitro and in BT474 xenograft models. In the same in vivo model, it was shown that trastuzumab and neratinib treatment in combination was more effective than either treatment alone.

In a 2010 phase 2 trial of Her-2+ breast cancer patients – half (n=66) of the patients had recurrence following therapy with trastuzumab (Herceptin), which is a monoclonal antibody that targets the Her-2/neu receptor, and the other half (n=70) had never received trastuzumab treatment:

The results of the study showed that neratinib was reasonably well tolerated among both the pretreated patients and the patients who had not received prior treatment with trastuzumab.

Considerably higher response rates were observed when neratinib was combined with chemotherapeutic agents, for example, 63% with capecitabine and 72% to 75% with neratinib plus paclitaxel.

Lapatinib (Tykerb) is a reversible inhibitor of EGFR and Her-2/neu kinases approved for use in combination with capecitabine in advanced breast cancer. Neratinib irreversibly blocks all HER kinases. It is associated with gastrointestinal activity in 65% of patients with 14% experiencing grade 3 or 4 diarrhea and 2% with either grade 3 nausea or vomiting (Table 1). The response rate in patients receiving lapatinib and capecitabine is 23.7%. 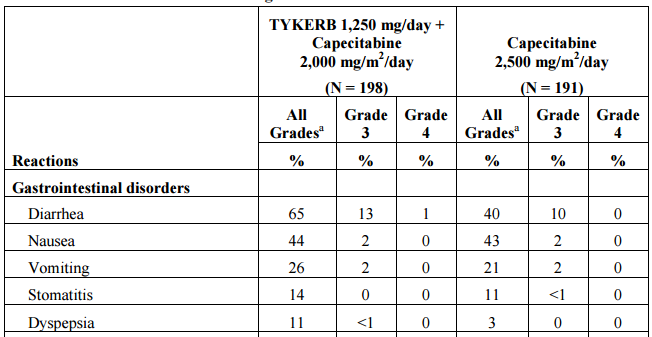 Early studies with neratinib had shown high rates of diarrhea, so, the company combined its use with loperamide (Imodium), an opioid receptor agonist that slows motility and transit in the colon. However, data released in advance of the San Antonio Breast Cancer Symposium demonstrated a worsening of gastrointestinal toxicities (Figure 3):

Puma disclosed data from the Phase II CONTROL trial in the extended adjuvant setting showing that treatment with loperamide helps lower the ~40% Grade 3 (G3) diarrhea seen in the ExteNET Phase III trial. However, the numbers released today show that the G3 rates went up compared to what was disclosed last year… Specifically, in patients in the original loperamide protocol, the rate of G3 diarrhea increased to 21.4% from 18.5%. Furthermore, in the amended protocol arm, the amount of G3 diarrhea more than doubled from 13% to 28.6%. Overall, the blended rate between these two arms was 27.1% vs. 16% last year.

The company added a corticosteroid, budesonide, to the treatment regimen to help ameliorate the gastrointestinal toxicities. The rate of Grade 3 diarrhea in sixteen patients receiving both loperamide and budesonide was just 12.5%, which is encouraging. 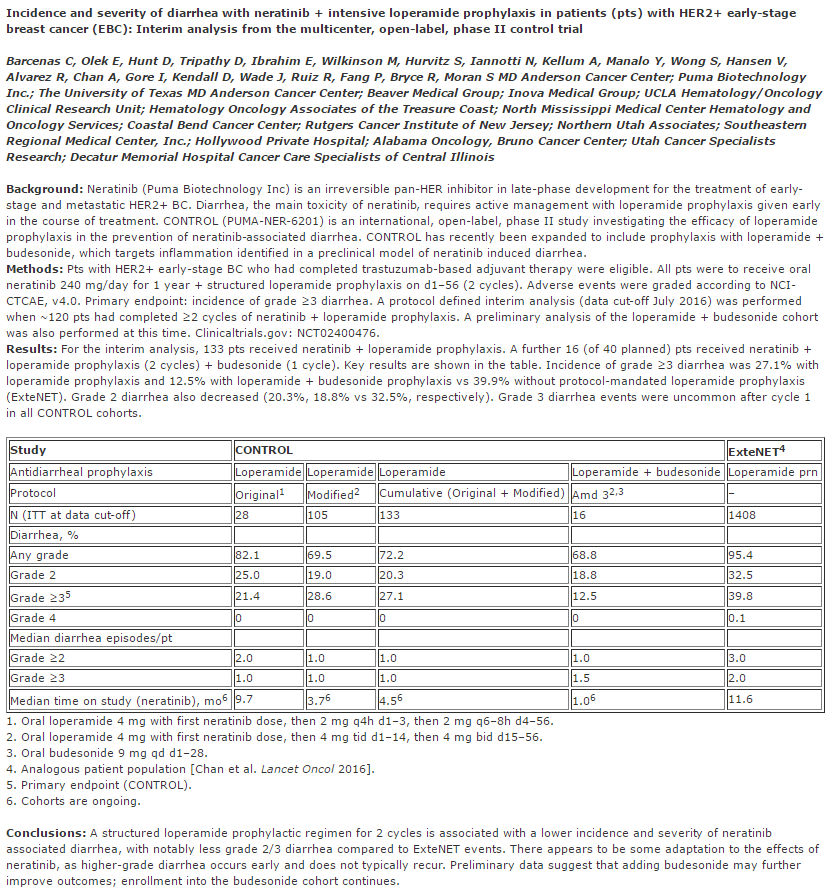 The precise molecular mechanism of neratinib-induced diarrhea is unknown, but is postulated to be due to EGFR inhibition and resultant secretory diarrhea. Diarrhea is a class effect of EGFR-directed tyrosine kinase inhibitors, and the most common toxicity of neratinib, a novel irreversible pan-HER tyrosine kinase inhibitor. Most higher-grade diarrhea with neratinib occurs during the first cycle of treatment, so, it is tolerated better during subsequent cycles of treatment.