Several companies, including Trillium, Celgene, Tioma, and Forty Seven are developing products that block CD47 for the treatment of cancer. Researchers have also shown that attacking CD47 may be a better approach to bone marrow conditioning prior bone marrow transplant.

CD47 is a membrane protein, which is involved in the increase in intracellular calcium concentration that occurs upon cell adhesion to extracellular matrix. The encoded protein is also a receptor for the C-terminal cell binding domain of thrombospondin, and it may play a role in membrane transport and signal transduction. This gene has broad tissue distribution.

Being ubiquitously expressed, CD47 is a marker of self that is used by the innate immune system – cells that do not express CD47 are considered foreign and attacked by macrophages and dendritic cells. Cells that do express CD47 bind with the signal regulatory protein-α (SIRP-α) receptor on macrophages and dendritic cells and are spared destruction. As such, CD47 is known as a “don’t eat me” signal to the innate immune system.

Tumors are able to evade immune recognition and removal through multiple processes, including creating an immunosuppressive environment, or direct tumor–immune cell interactions. One mechanism to avoid removal by innate immune cells (macrophages and dendritic cells) is to upregulate “don’t eat me” signals preventing phagocytosis. In addition to preventing programed cell removal (PrCR) by reducing total phagocytosis, antigen presentation from innate to adaptive immune cells is limited, thereby restricting the cross-presentation to the adaptive immune cells. As a result, immunotherapies that increase tumor cell recognition by innate immune cells should also act as stimulation to the adaptive immune response in vivo.

CD47 has increased expression in circulating hematopoietic stem cells (HSC), red blood cells (RBC), and a high proportion of malignant cells. Although CD47 has multiple functions in normal cell physiology, in cancer it acts primarily as a dominant “don’t eat me” signal. On tumor cells, prophagocytic signals may be present, but if the tumor cells are expressing CD47, it can bind with signal regulatory protein-α (SIRP-α) on phagocytic immune cells, preventing engulfment. CD47:SIRP-α engagement results in activation of SIRP-α by which phosphorylation of immune-receptor tyrosine-based inhibition (ITIM) motifs leading to the recruitment of Src homology phosphatase-1 (SHP-1) and SHP-2 phosphatases preventing myosin-IIA accumulation at the phagocytic synapse preventing phagocytosis . This inhibitory mechanism of CD47 expression is seen in a broad range of malignancies and is therefore an attractive therapeutic target for all tumors expressing CD47. 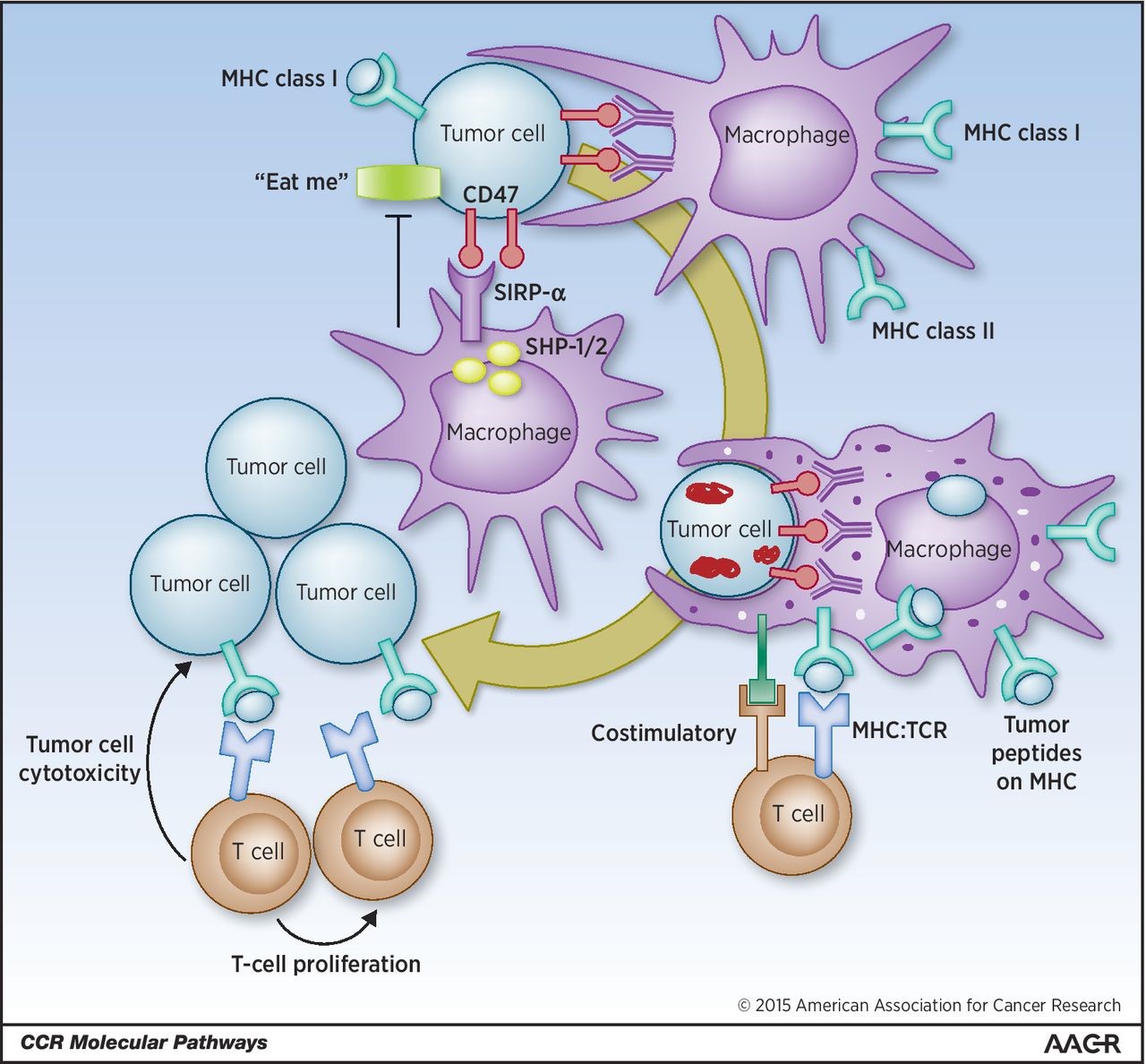 Tumor cells display MHC class I, surface markers of “self,” antiphagocytic–“don’t eat me,” and phagocytic–“eat me” signals. Engagement of tumor cells CD47 (“don’t eat me” signal) with macrophages SIRP-α causes activation and phosphorylation of SIRP-α ITIM motifs and the recruitment of SHP-1 and SHP-2 phosphatases preventing myosin-IIA accumulation at the phagocytic synapse inhibiting tumor cell phagocytosis. By blocking the CD47:SIRP-α engagement with antibodies (or alternate strategies) an increase in tumor cell phagocytosis by APCs is observed. The engulfed tumor cells are then processed, and tumor-associated antigens are presented by these APCs on their MHC. Naïve tumor reactive T cells can then engage with MHC on APCs presenting tumor neoantigens with additional costimulatory molecules. These tumor-specific T cells are then activated, expand, and are able to cause antigen-specific tumor cell cytotoxicity on remaining malignant cells. http://clincancerres.aacrjournals.org/content/21/16/3597

In preclinical models, disruption of the CD47:SIRP-α axis results in enhanced phagocytosis, tumor reduction, and has recently been demonstrated to be a means to cross-present tumor antigens to T cells.

Immunohistochemical expression of CD47 in gastric cancer surgical specimens was investigated. Expression of CD47 and CD44, a known gastric cancer stem cell marker, were investigated in gastric cancer cell lines by flow cytometry. MKN45 and MKN74 gastric cancer cells were sorted by fluorescence-activated cell sorting according to CD44 and CD47 expression levels, and their in vitro proliferation, spheroid-forming capacity, and in vivo tumorigenicity were studied. In vitro phagocytosis of cancer cells by human macrophages in the presence of a CD47 blocking monoclonal antibody (B6H12) and the survival of immunodeficient mice intraperitoneally engrafted with MKN45 cells and B6H12 were compared to experiments using control antibodies. Immunohistochemistry of the clinical specimens indicated that CD47 was positive in 57 out of 115 cases, and its positivity was an independent adverse prognostic factor. Approximately 90% of the MKN45 and MKN74 cells expressed CD47 and CD44. CD47(hi) gastric cancer cells showed significantly higher proliferation and spheroid colony formation than CD47(lo) , and CD44(hi) CD47(hi) cells showed the highest proliferation in vitro and tumorigenicity in vivo. B6H12 significantly enhanced in vitro phagocytosis of cancer cells by human macrophages and prolonged the survival of intraperitoneal cancer dissemination in mice compared to control antibodies. In conclusion, CD47 is an adverse prognostic factor and promising therapeutic target in gastric cancer.

Acute myelogenous leukemia (AML) is organized as a cellular hierarchy initiated and maintained by a subset of self-renewing leukemia stem cells (LSC). We hypothesized that increased CD47 expression on human AML LSC contributes to pathogenesis by inhibiting their phagocytosis through the interaction of CD47 with an inhibitory receptor on phagocytes. We found that CD47 was more highly expressed on AML LSC than their normal counterparts, and that increased CD47 expression predicted worse overall survival in 3 independent cohorts of adult AML patients. Furthermore, blocking monoclonal antibodies directed against CD47 preferentially enabled phagocytosis of AML LSC and inhibited their engraftment in vivo. Finally, treatment of human AML LSC-engrafted mice with anti-CD47 antibody depleted AML and targeted AML LSC. In summary, increased CD47 expression is an independent poor prognostic factor that can be targeted on human AML stem cells with blocking monoclonal antibodies capable of enabling phagocytosis of LSC.

Osteosarcoma is the most common bone tumors in children and adolescents. Despite intensive chemotherapy, patients with advanced disease still have a poor prognosis, illustrating the need for alternative therapies. In this study, we explored the use of antibodies that block CD47 with a tumor growth suppressive effect on osteosarcoma. We first found that up-regulation of CD47 mRNA levels in the tumorous tissues from eight patients with osteosarcoma when compared with that in adjacent non-tumorous tissues. Further western-blot (WB) and immunohistochemistry (IHC) demonstrated that CD47 protein level was highly expressed in osteosarcoma compared to normal osteoblastic cells and adjacent non-tumorous tissues. Osteosarcoma cancer stem cell markers staining shown that the majority of CD44+ cells expressed CD47 albeit with different percentages (ranging from 80% to 99%). Furthermore, high CD47 mRNA expression levels were associated with a decreased probability of progression-free and overall survival. In addition, blockade of CD47 by specific Abs suppresses the invasive ability of osteosarcoma tumor cells and further inhibits spontaneous pulmonary metastasis of KRIB osteosarcoma cells in vivo. Finally, CD47 blockade increases macrophage phagocytosis of osteosarcoma tumor cells.In conclusion, our findings demonstrate that CD47 is a critical regulator in the metastasis of osteosarcoma and suggest that targeted inhibition of this antigen by anti-CD47 may be a novel immunotherapeutic approach in the management of this tumor.

Trillium announced the initiation of dosing in patients with relapsed or refractory hematologic malignancies on February 3, 2016, and the FDA’s acceptance of its IND for solid tumors and mycosis fungoides on August 17, 2016. TTI-621 (SIRPαFc) is a soluble recombinant fusion protein created by directly linking the sequences encoding the N-terminal CD47 binding domain of human SIRPα with the Fc domain of human immunoglobulin (IgG1). TTI-621 acts by binding human CD47 and preventing it from delivering an inhibitory “do not eat” (antiphagocytic) signal to macrophages. This antibody-like molecule binds to CD47 on the tumor cells with high affinity and functions as a decoy receptor, preventing malignant cells from delivering the suppressive “do not eat” signal. SIRPαFc enables macrophages to kill tumor cells in vitro (while sparing normal cells) and induces potent anti-tumor effects in vivo.

Celgene acquired rights to a monoclonal antibody targeting CD47 developed by Inhibrx in a $500MM deal. Celgene is collaborating on a multi-year, $18.7 million funded development project led by the University of Oxford focused on using CD47 antibodies to treat leukemia. It has studies ongoing with CC-90002 in AML and myelodysplastic syndromes, relapsed or refractory solid tumors, Multiple Myeloma (MM) or non-Hodgkin’s lymphoma (NHL).

Use of CD47 in bone marrow conditioning

Stanford University researchers showed that mice can be conditioned for HSC (hematopoietic stem cell) transplantation with two biologic agents: a monoclonal antibody (ACK2) targeting c-kit (which binds stem cell factor, CSF) and another antagonist targeting CD47. ACK2 impairs and depletes the host stem cell compartment. CV1mb targets CD47, a transmembrane protein expressed on hematopoietic stem cells and other cells, acting as a marker of self — a “don’t eat me” signal — and is an innate immune checkpoint. When used together, this combination led to a more than 99% depletion of host HSCs, and then a donor transplant led to a robust reconstitution of multi-lineage blood cells. If the results in clinical trials parallel the mouse studies, patients may be able to forgo the toxic conditioning regimen and instead opt for using an immunotherapy approach that may be associated with significantly lower toxicities, including lower graft-vs-host disease.