What is STS (Soft Tissue Sarcoma)?

Unlike carcinomas, which are develop in the epithelial cells of discrete organs and account for roughly 90% of all malignancies, STS is a group of cancers of mesenchymal origin – tissues that support and connect the body, such as fat cells, muscle, nerves, tendons, the lining of joints, blood vessels, or lymph vessels. As a result, STS can occur almost anywhere in the body. Because there are at least 50 different types of STS, it is more accurately described as a family of related diseases, rather than a single disease. The incidence of STS is approximately 12,000 per year in the US, with 4,700 deaths.

Platelet-derived growth factor (PDGF) isoforms stimulate growth, survival and motility of mesenchymal cells and certain other cell types. They have important functions during embryonal development and in the control of tissue homeostasis in the adult. Overactivity of PDGF signaling is associated with the development of certain malignant diseases, as well as non-malignant diseases characterized by excessive cell proliferation.

The PDGF family consists of disulphide-bonded homodimers of A-, B-, C- and D-polypeptide chains, and the heterodimer PDGF-AB. The PDGF isoforms are synthesized as precursor molecules. PDGF-AA, -AB and –BB are cleaved already inside the producer cells in secretory vesicles. In contrast, PDGF-CC and –DD are secreted as inactive precursor molecules; N-terminal CUB-domains need to be cleaved off to activate the growth factors. This cleavage serves an important regulatory role, and is performed by tissue-type plasminogen activator (tPA) or plasmin in the case of PDGF-CC, and by urokinase-type PA (uPA) or matriptase (MT-Sp1) in the case of PDGF-DD.

PDGF isoforms exert their cellular effects by binding to α- and β-tyrosine kinase receptors (PDGFRα and PDGFRβ, respectively). The two PDGF receptors are structurally similar and consist of extracellular domains with five immunoglobulin (Ig) – like domains and intracellular parts with kinase domains which contain characteristic inserts of about 100 amino acid residues without homology to kinases. Ligand binding occurs mainly to Ig-like domains 2 and 3, and causes dimerization of the receptors, which is further stabilized by direct receptor-receptor interactions involving Ig-like domain 4 [8,9]. The dimerization is a key event in activation since it brings the intracellular parts of the receptors close to each other promoting autophosphorylation in trans between the receptors. The PDGF polypeptide chains bind to the receptors with different affinities. Thus, PDGF-AA, -AB, -BB and -CC induce αα receptor homodimers, PDGF-BB and PDGF-DD ββ receptor homodimers, and PDGF-AB, -BB, -CC and –DD αβ receptor heterodimers. 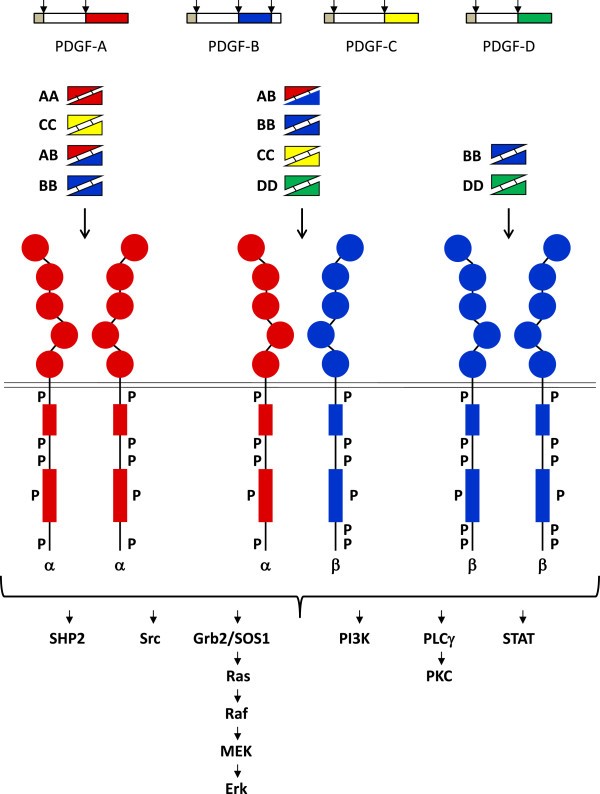 Binding of the five PDGF isoforms induces different homo- and heterodimeric complexes of PDGFRα and PDGFRβ. The PDGF isoforms are synthesized as precursor molecules with signal sequences (grey), precursor sequences (open) and growth factor domains (red, blue, yellow and green). After dimerization, the isoforms are proteolytically processed (arrows) to their active forms which bind to the receptors. The extracellular parts of the receptors contain 5 Ig-like domains; ligand binding occurs preferentially to domains 2 and 3, and domain 4 stabilizes the dimer by a direct receptor-receptor interaction. The intracellular parts of the receptors contain tyrosine kinase domains split into two parts by an intervening sequence. Ligand-induced dimerization induces autophosphorylation of the receptors, which activates their kinases and create docking sites for SH2-domain-containing signaling molecules, some of which are indicated in the figure. Activation of these signaling pathways promotes cell growth, survival, migration and actin reorganization. http://www.ncbi.nlm.nih.gov/pmc/articles/PMC3878225/

PDGFR is over-expressed in cancer, both in stromal cells (e.g., fibroblasts) where it drives heterotypic cellular interactions that promote invasiveness and angiogenesis, and in cancer cells, where it drives proliferation. 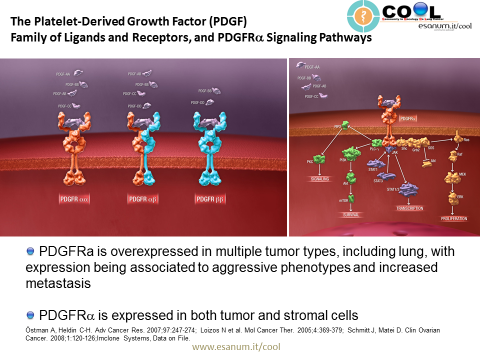 Platelet-derived growth factor receptor α (PDGFRα) is expressed in multiple tumor types, and its aberrant activation has been implicated in cancer. Co-expression of PDGFRα and PDGFs, consistent with autocrine-mediated growth, has been reported in sarcomas and glioblastomas. Gene amplification and activating mutations of PDGFRα have been found in subsets of glioblastomas, non-small cell lung cancers, and gastrointestinal stromal tumors. PDGFRα expression has been associated with increased metastatic potential in preclinical models. Paracrine stimulation of PDGFRα-positive stromal cells has been shown in preclinical studies to enhance tumor growth by providing factors for angiogenesis and extracellular matrix remodeling. (Click here to see a video explaining the mechanism of action of olaratumab.) 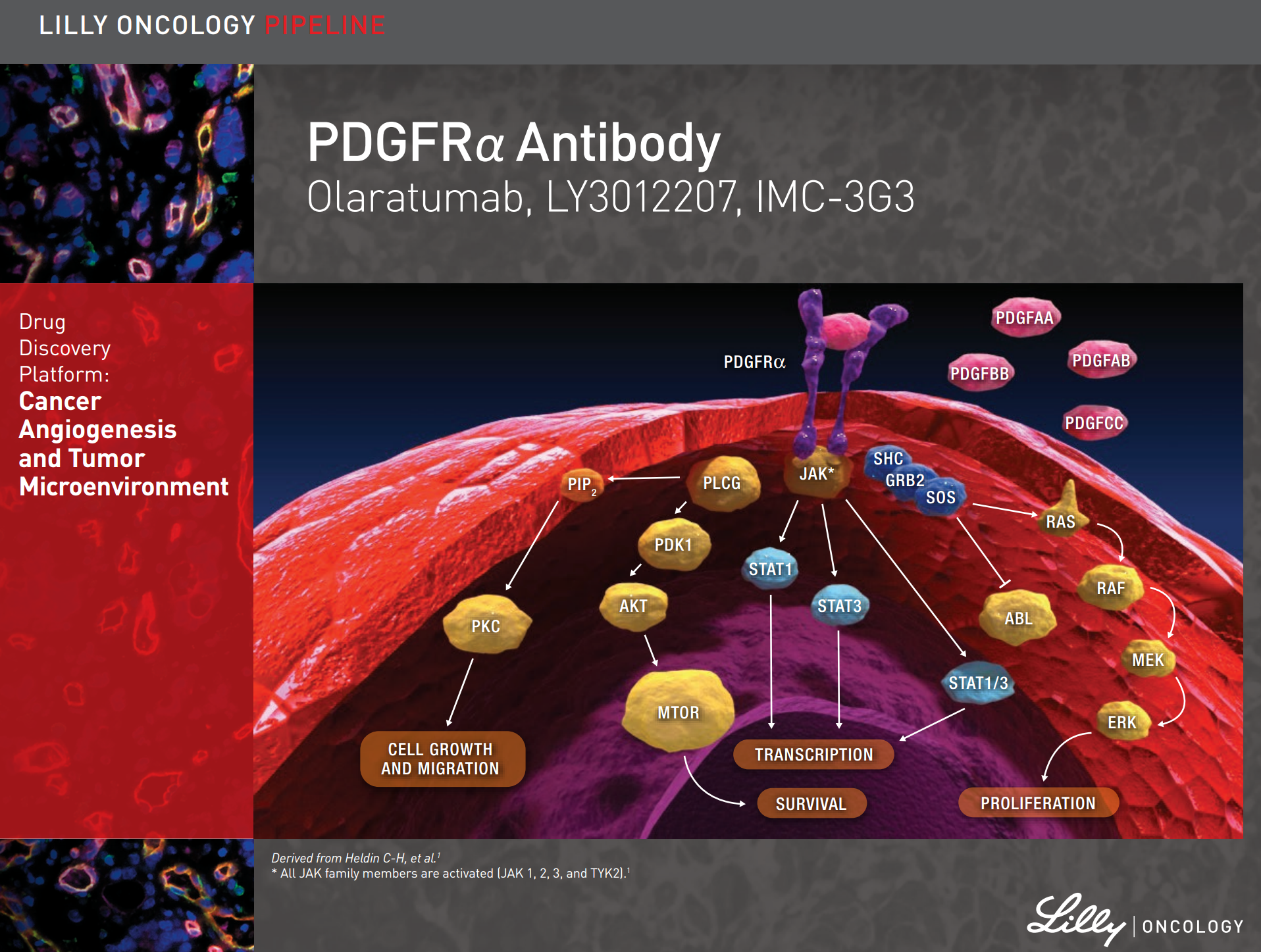 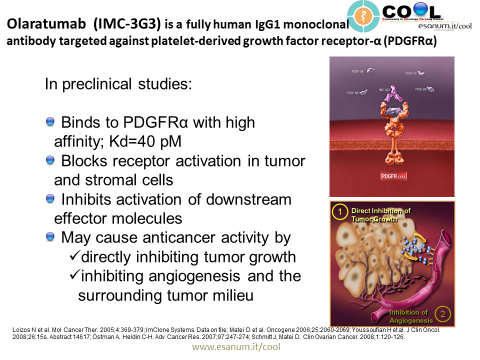 The Phase II trial of olaratumab [A Phase 1b/2 Randomized Phase 2 Study Evaluating the Efficacy of Doxorubicin With or Without a Human Anti-PDGFRα Monoclonal Antibody (IMC-3G3) in the Treatment of Advanced Soft Tissue Sarcoma)] included 133 patients who were not amenable to surgery or radiotherapy and did not receive prior therapy with an anthracycline. The patients were randomized to receive doxorubicin alone (n = 67) or doxorubicin plus olaratumab (n = 66). Patients who received doxorubicin alone were eligible to receive olaratumab monotherapy after progression.

A Phase III study in 460 patients is ongoing – A Randomized, Double-Blind, Placebo-Controlled, Phase 3 Trial of Doxorubicin Plus Olaratumab Versus Doxorubicin Plus Placebo in Patients With Advanced or Metastatic Soft Tissue Sarcoma.