The U.S. Food and Drug Administration (FDA) has granted orphan-drug designation to peptide SOR-C13 (Sorcimed) for the treatment of ovarian cancer. Additionally, two forms of a peptide derived from a naturally-occurring human protein (Psaptides) can force tumors to shrink significantly in an animal model of metastatic ovarian cancer,

SOR-C13 binds with high selectivity and affinity to TRPV6, a calcium channel that is highly elevated in prostate, breast, lung and ovarian cancer and is correlated with poor outcomes. TRPV6-mediated Ca2+ entry is responsible for maintaining a high tumor proliferation rate, as well as increasing tumor cell survival and fortifying mechanisms that withstand cell destruction. By binding to this channel, SOR-C13 starves cancer cells of calcium that is needed for cell growth and division. As demonstrated in animal models, the result is an inhibition of tumor growth. Due to the high specificity of SOR-C13 for its target and its unique mechanism of action this drug candidate may result in fewer and less severe side effects compared to standard cancer chemotherapy.  SOR-C13 is the first drug candidate targeting TRPV6 to have entered clinical development.

There is direct evidence for a transient Ca2+ trigger in the initiation of the cell cycle upon serum stimulation. In addition, Ca2+ influx activates NF-κB, which induces well-known cell cycle control gene, cyclin D1. SOR-C13 selectively and powerfully stop the TRPV6 channels from working and reset the cell toward normal calcium content. As the calcium content decreases, the inhibition of the self-destruct pathway (apoptosis) is lifted and the cells die.

The TRPV channels can be divided into two groups with differing functions. Channels TRPV1–4 are activated by heat and act as chemosensors for several endogenous or synthetic ligands. TRPV5/V6 are constitutively active and are involved in renal and intestinal Ca2+ absorption. 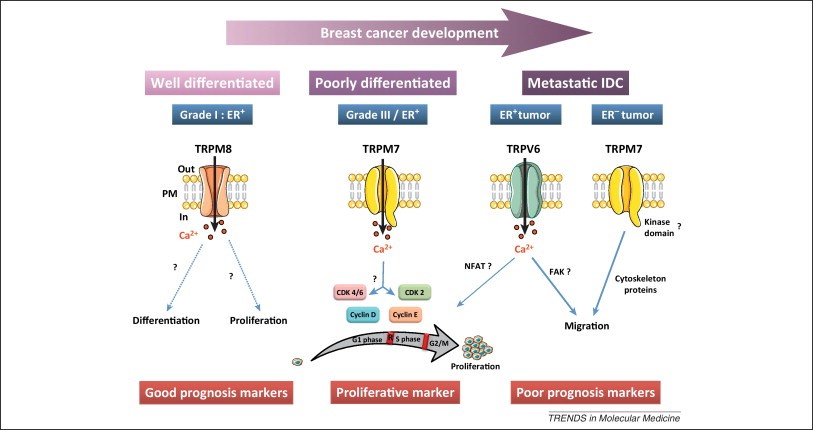 Expression and prognostic significance of TRP channels in breast ductal adenocarcinoma progression. TRPM8 is expressed at the plasma membrane in the estrogen receptor-positive (ER+) well-differentiated breast tumors. In that regard, it could be considered a good prognosis marker in breast adenocarcinoma. TRPM7 is highly expressed in ER+ high-grade tumors with high Ki67 (cell proliferation marker present during all active phases of the cell cycle and absent in G(0)) and large tumor size. TRPM7 is activated at resting state (constitutively activated) and permits Ca2+ entry that stimulates cell cycle progression and, therefore, cell proliferation. In this context, we propose this channel as a proliferative marker in ER+ poorly differentiated breast cancers. TRPM7 and TRPV6 may contribute to metastasis formation in breast cancer. Both TRPV6 and TRPM7 are overexpressed in invasive breast cancer and control cell migration, but their expression depends on the estrogen receptor status. We can thus speculate that TRPV6, which is under estrogen regulation, triggers metastases in ER+ invasive breast cancer through a Ca2+-dependent mechanism. Conversely, in the more aggressive estrogen-insensitive cell phenotype, characterized by a poor prognosis, the metastases are governed by TRPM7 via an interaction with cytoskeleton proteins. Thus, TRPV6 and TRPM7 are considered markers of poor prognosis in ER+ and estrogen receptor-negative (ER–) metastatic ductal carcinoma, respectively. FAK, focal adhesion kinase; NFAT, nuclear factor activated T cells. (Illustrations courtesy of Servier Medical Art.). http://www.cell.com/trends/molecular-medicine/fulltext/S1471-4914(12)00223-7

In February 2016, Sorcimed announced top-line results from its Phase 1 multi-center, open-label, dose escalation study of first-in-class peptide SOR-C13 in subjects with advanced solid tumor cancers. The primary goal of the study was to assess safety and tolerability of SOR-C13 in subjects with advanced carcinomas commonly known to express the TRPV6 channel and who had failed all previous anti-cancer treatments.

What are Psaptides and why are the important in ovarian cancer?

Surgery and chemotherapy with taxanes and platinum agents are the most common therapies, but ovarian cancer cells often develop resistance to these drugs, leaving women with advanced disease few therapeutic options.

In 2009, they announced that a protein called prosaposin (psap) could block metastasis in animal models of breast and prostate cancer. Prosaposin stimulates immune cells called monocytes to produce thrombospondin-1 (TSP-1), a potent anti-angiogenic and anti-inflammatory protein that makes otherwise-permissive tissues resistant to metastasis. 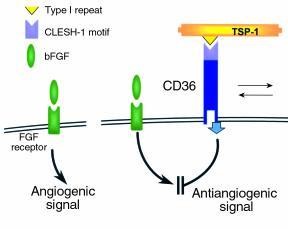 Angiogenesis induced by bFGF (left) is inhibited by TSP-1 through the interaction of the TSP type I repeat with the CLESH-1 domain of the signaling receptor CD36. http://www.jci.org/articles/view/9061/figure/9

Together with collaborators Lars Akslen, MD, PhD, from the University of Bergen and Vivek Mittal, PhD, of Weill Cornell, in 2013 Watnick showed that psaptide, a five-amino acid fragment of prosaposin, is fully capable of triggering TSP-1 production and could significantly reduce metastatic spread in mouse models of prostate, breast and lung cancer.

D-psaptide replaces two of psaptide’s amino acids with D-amino acids (mirror images of normal amino acids, which the body does not break down as readily). Cyclopsaptide is a cyclic version of D-psaptide. D-psaptide and cyclopsaptide are three and six times more potent, respectively, at stimulating TSP-1 release than native psaptide, the team found, and are also significantly more stable in human plasma.

“Essentially, we’re using the prosaposin peptides as immunomodulators by getting them to turn monocytes into delivery vehicles to get TSP-1 to ovarian tumors,” Watnick explained. “This strategy should work without interfering with any immune response directed specifically against the tumor.”

In one set of experiments, mice received daily treatment with cisplatin or D-psaptide for up to 83 days. In a second set, the tumors were allowed to establish themselves for a longer period of time and then were treated daily with either cisplatin or cyclopsaptide and followed for a shorter period of time (15 days) to allow close examination of any remaining tumor: