Why elephants do not get cancer is a famous conundrum that was posed by epidemiologist Richard Peto of the University of Oxford, UK, in the 1970’s. Peto noted that, in general, there is little relationship between cancer rates and the body size or age of animals. That is surprising: the cells of large-bodied or older animals should have divided many more times than those of smaller or younger ones, so should possess more random mutations predisposing them to cancer. Peto speculated that there might be an intrinsic biological mechanism that protects cells from cancer as they age and expand.

At least one solution to Peto’s paradox may now have been found, according to a pair of papers independently published this week. Elephants have 20 copies of a gene called p53 (or, more properly, TP53), in their genome, where humans and other mammals have only one. The gene is known as a tumour suppressor, and it snaps to action when cells suffer DNA damage, churning out copies of its associated p53 protein and either repairing the damage or killing off the cell.

TP53 is a tumor suppressor gene that senses DNA damage and arrests the cell (prevents it from dividing) in an effort for the cell to repair the damage. If repair is not possible, TP53 then mediates apoptisis, the “self-destruct” sequence to kill the cell in order to eradicate cells that may have undergone de-regulation due to the DNA damage. De- or dys-regulated cells bypass normal growth and proliferation (and apoptosis) cues, leading to cancer. TP53 is induced by many threats to genomic viability of the cell, including:

The protein is a transcription factor that induces the expression of a range of genes to effect its functions – ninety percent of p53 mutations associated with cancer disrupt its ability to bind to DNA. High levels of p53 in the cell is tell-tale sign that the gene has been mutated and is not functioning as an effective transcription factor because it induces the expression of MDM2, a protein that degrades p53, itself.

TP53 is a “brake” on the cell that is held in check by another molecule, MDM2 – upon release from MDM2, it rapidly induces gene expression. By inducing p21, TP53 blocks Rb functioning, even in cells that have passed the R-point transition as a result of mitogenic signaling. In this way, it leads to cell cycle arrest. Apoptosis induction by TP53 is mediated through the induction of Bax and Puma & Noxa, the Fas Death Receptor, Insulin-Like Growth Factor Binding Protein-3 (which is an inhibitor of cellular tropic signals), and FOXO3 (a transcription factor for apoptotic genes. 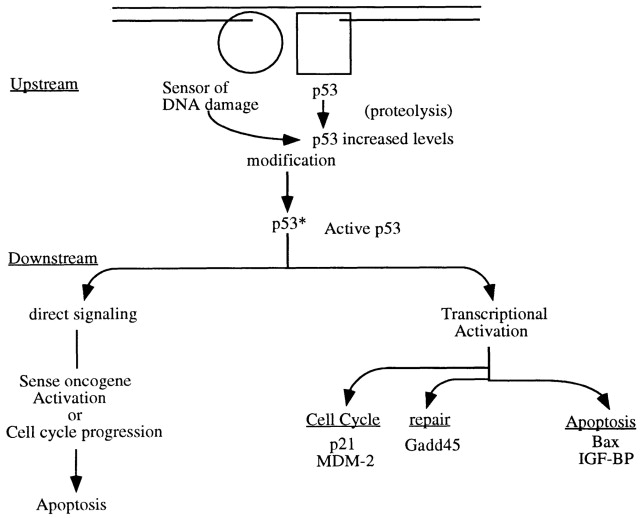 Figure 1. The Events in p53 Activation – DNA damage (indicated by the break in the double line at the top) is recognized by a “sensor” molecule that identifies a specific type of lesion and possibly by the p53 protein, using its C-terminal domain. The sensor modifies p53 (by phosphorylation) when both molecules correctly determine that there is damage. A modified p53 is more stable (enhanced half-life), and a steric or allosteric change in p53 permits DNA binding to a specific DNA sequence regulating several downstream genes (p21, MDM2, GADD45, Bax,IGF-BP, and cyclin G). Two modes of signaling for cellular apoptosis are possible: one requiring transcription and one involving direct signaling with no transcription of downstream genes required. http://www.ncbi.nlm.nih.gov/pubmed/9039259?dopt=Abstract 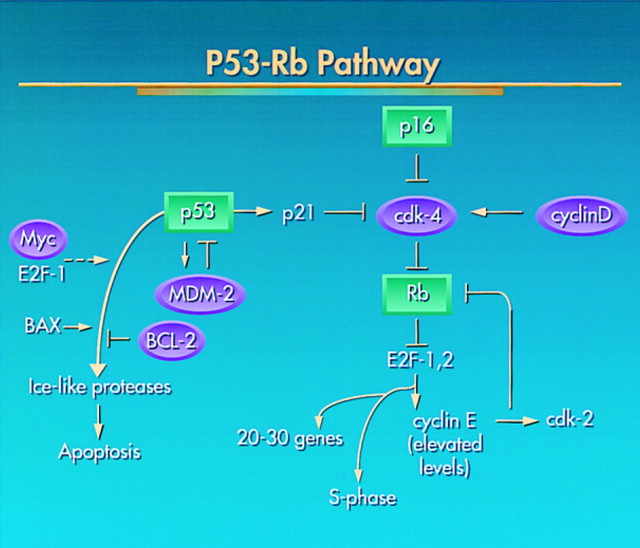 The p53–Rb Pathway. Experiments discussed in the text permit one to postulate the interrelationships among a number of oncogenes (purple circles) and tumor suppressor genes (green squares) that regulate the G1–S phase restriction point, its relation to a DNA damage checkpoint mediated by p53, and the choice by p53 whether to initiate a G1 arrest (via p21) or apoptosis. The available evidence suggests an important role for Rb and its two related gene products, p107 and p130 (along with E2F-4 and -5), in p53-mediated G1–S phase regulation. Shown are the p53–MDM2 autoregulatory loop that reverses this checkpoint control and the gene products that positively or negatively act on the probability of entering apoptosis. http://www.ncbi.nlm.nih.gov/pubmed/9039259?dopt=Abstract

The analysis of a large database of elephant deaths showed that less than five percent of elephants die of cancer, compared to 11 to 25 percent in people.

The researchers found that elephants produce extra copies of the p53 protein, and that elephant blood cells seem exquisitely sensitive to DNA damage from ionizing radiation. The animals’ cells carry out a controlled self-destruction called apoptosis in response to DNA damage at much higher rates than do human cells. Schiffman suggests that, instead of repairing the DNA damage, compromised elephant cells have evolved to kill themselves to nip nascent tumors in the bud.

Since elephants have many more copies of p53, they are more protected from mutations to this tumor suppressor gene as a driver of cancer induction.

Mel Greaves, a cancer biologist at the Institute for Cancer Research in London, states that TP53 cannot be the only explanation. “As large animals get bigger, they become more and more sluggish,” he notes, thereby slowing their metabolism and the pace at which their cells divide. And protective mechanisms can only do so much to stop cancer, he adds. “What would happen if elephants smoked and had a bad diet,” he says. “Would they really be protected from cancer? I doubt it.”