Researchers at the University of North Carolina have been developing a chemotherapy drug treatment utilizing iontophoresis specifically for prostate and breast cancer.

The major issue in cancer chemotherapy is obtaining significant concentrations of drug at the site of tumor required to kill cancer cells, while at the same time having low levels of drug at non-cancerous sites in order to reduce off-target toxicities. Intravenous chemotherapy drugs commonly have a high toxicity because they are not selective; they act not only on cancer cells, but also on “normal” cells, often causing powerful side effects. Also, the lack of sufficient concentrations of drug in the tumor reduces potential effectiveness, therefore, suboptimal survival rates are observed.

The method of iontophoresis works by creating an electric field to diffuse ions through tissues. The drug of interest is placed at the anode with similar polarity. This will cause an electromotive force to repel the drug allowing it to diffuse into tissues. Thus, an electrical current is surrounding the solid tumor allowing the drug or multiple drugs to achieve high concentration(s) at the tumor site. 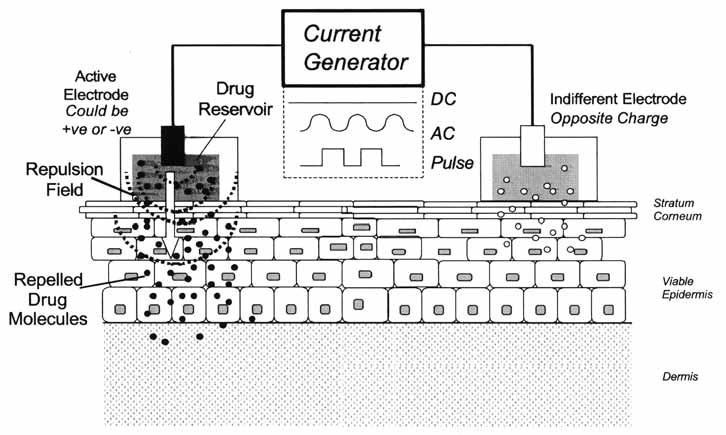 The approach has worked in mouse models of breast cancer and pancreatic cancer. Gemitabine is a nucleoside metabolic inhibitor which prevents progression into the mitotic phase. This only provides some selectivity. A high concentration of gemcitabine in close proximity to the tumor can increase the selectivity, which was shown from results in mice with pancreatic tumors. The pancreatic tumors reduced significantly within a week of treatment.

Cisplatin causes protein-DNA adducts, which leads to cell cycle arrest in the G2-phase and then induces programmed cell death or apoptosis. Cisplatin is highly toxic to transformed cells and normal cells. Renal and neuropathic toxicities of cisplatin are due to interaction of activated cisplatin with critical renal and nervous system tissues. Cisplatin is associated with both proximal and distal tubule damage due to activation of cisplatin in the renal tubules. Neurotoxicity due to cisplatin may be due to cisplatin-induced damage to Schwann cells, which compose the myelin sheath surrounding nerves. DNA damage and segmental cell loss is a possible explanation of demelination seen in cisplatin-induced neuropathies. The following diagram depicts the many pathways induced by cisplatin resulting in apoptosis. 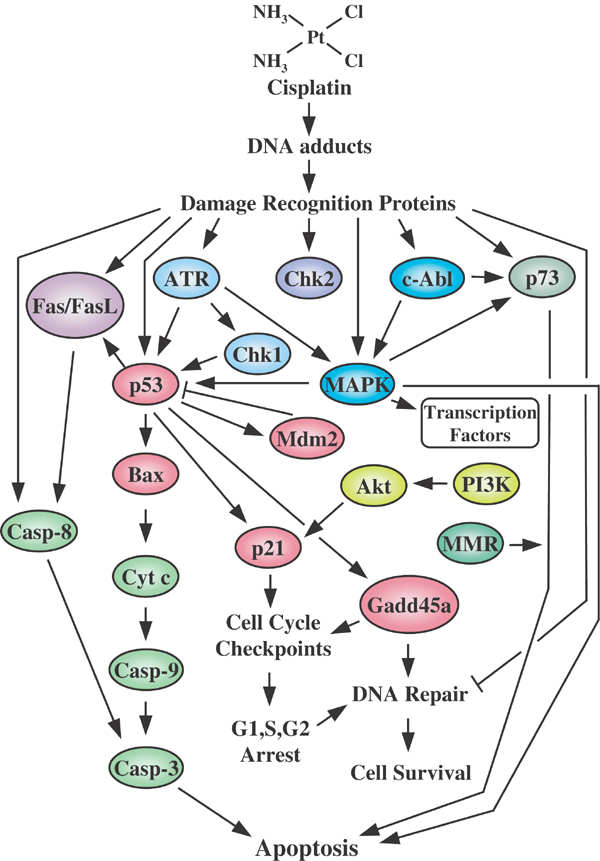 An overview of pathways involved in mediating cisplatin-induced cellular effects. Cell death or cell survival will depend on the relative intensity of the signals generated and the crosstalk between the pathways involved. Some of the signaling discussed in the text has been omitted for clarity. http://www.nature.com/onc/journal/v22/n47/fig_tab/1206933f1.html#figure-title

If the concentration of cisplatin were to be higher in the tumor than in normal tissues (bone marrow, for example), the therapeutic ratio of cisplatin would be significantly increased. Promising results were found in mice and canines with a 25-fold decrease of concentration in the bloodstream with significant reduction of tumor progression in the pancreas and breast.

Iontophoresis is still in the pre-clinical stage of development. If results in the clinic are as promising as results in animal models, the method may be quite useful for treating localized tumors.