BRDs 2, 3, and 4 are considered potential cancer targets because of their pivotal role in regulating the transcription of growth-promoting genes and cell cycle regulators.  Of particular interest, inhibition of BRD2/3/4 down-regulates MYC transcription, followed by genome-wide down-regulation of Myc-dependent target genes.

MYC is a very powerful oncogenic transcription factor, which is acts by the following mechanisms: 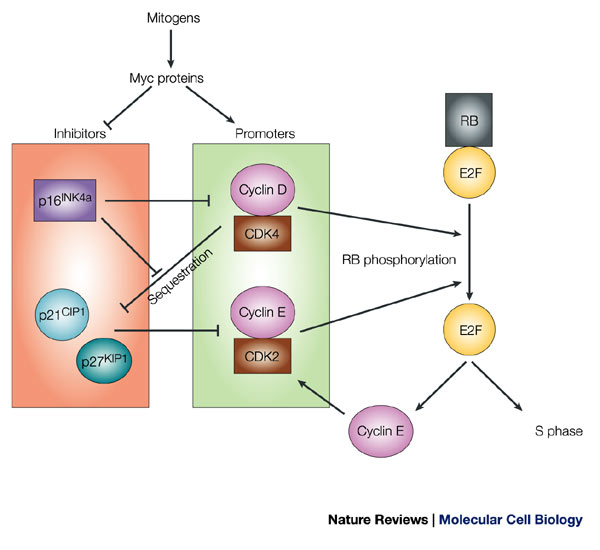 Mitogenic signals that are mediated through Myc-family proteins promote G1–S progression by several mechanisms. Myc induces the expression of cyclin D and cyclin-dependent kinase (CDK)4, which together form an active kinase complex. Low-level phosphorylation of retinoblastoma (RB) family proteins by cyclin-D–CDK4 (or cyclin-D–CDK6, not shown) disrupts interactions between RB and E2F proteins, which relieves RB-mediated repression of E2F-target genes. Early E2F-dependent transcription of cyclin E (which might also be a Myc target) leads to the formation of active cyclin-E–CDK2 complexes. Cyclin-E–CDK2 functions in a positive-feedback loop to promote RB hyperphosphorylation. This releases E2F, which results in the full activation of E2F target genes that promote entry into S-phase. The activities of cyclin–CDK complexes are opposed by CDK inhibitors, which might be targets for Myc-mediated repression. p21CIP1 and p27KIP1 inactivate cyclin-E–CDK2 complexes. p21CIP1 and p27KIP1 are also sequestered by active cyclin-D–CDK complexes, which frees cyclin-E–CDK2 from their inhibitory effects. p16INK4a binds to, and disrupts, cyclin-D–CDK complexes, which blocks G1–S progression both by preventing the cyclin-D–CDK4-mediated RB protein phosphorylation and by releasing sequestered p21CIP1 and p27KIP1. http://www.nature.com/nrm/journal/v5/n10/fig_tab/nrm1491_F1.html 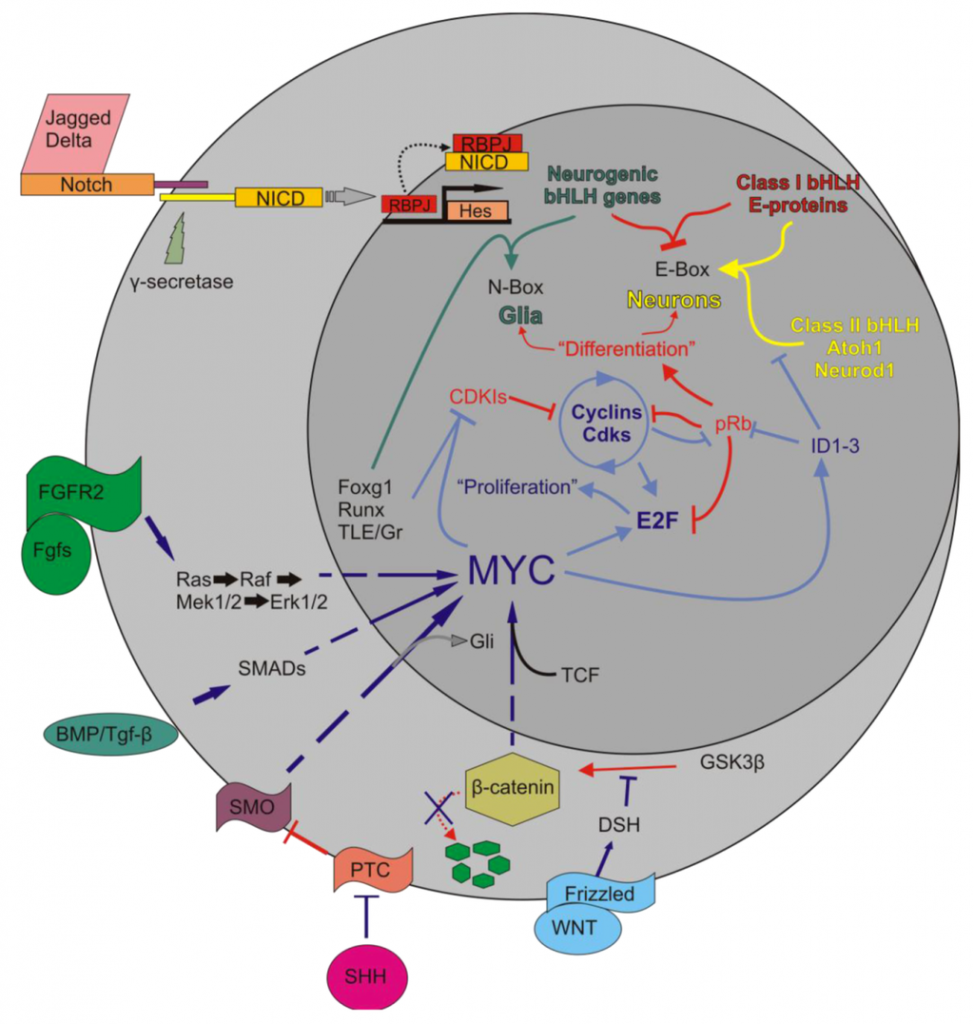 The interactions of Myc in the body are complex. Upon activation of Notch by Jagged or Delta, the Notch IntraCellular Domain (NICD) is cleaved by γ-secretase. NICD translocates to the nucleus to form a complex with RBPJ to positively regulate the transcription of the Hes family of bHLH TFs [63]. Myc is regulated by a number of pathways, including the Wnt/β-catenin pathway, Tgf-β or Bmp/Smad, Fgf/Erk1/2, and the Shh/Smo pathways. Once activated, Myc interacts with partner proteins to regulate a number of downstream effectors, including the cyclins, E2Fs, IDs, CDKIs, and various microRNAs. This regulation leads to the inhibition of class II bHLH TFs from binding to the E-proteins which then allows the Hes family to occupy the E-proteins. It also leads to the removal of pRb from E2F and allows E2F to bind S-phase promoting genes. The larger circle represents the cell as a whole while the smaller circle is the nucleus. Arrows indicate upregulation while blunted lines represent inhibition. Red indicates pathways favoring differentiation, blue indicates pathways favoring proliferation – http://www.mdpi.com/2073-4409/1/4/667/htm 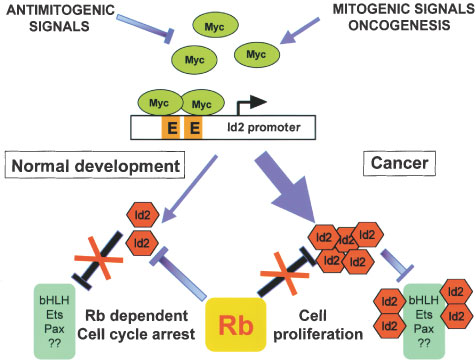 The Myc-Id2-Rb pathway in development and cancer. Myc proteins are intracellular sensors of mitogenic and antimitogenic signals. When constitutively activated by genetic alterations, Myc are transformed in powerful oncoproteins. Myc bind two E-boxes in the Id2 promoter and activate transcription. During normal development of the nervous system, activity of the N-Myc-Id2 pathway is restrained by Rb. Rb binds Id2 and might prevent Id2-mediated inhibition of bHLH, Ets, Pax and maybe other transcription factors. In neuroblastoma, N-myc amplification and overexpression induces accumulation of Id2 to levels exceeding active Rb. Id2 would be free to inhibit transcription of the natural targets that control cell proliferation. E, E-box (http://www.nature.com/onc/journal/v20/n58/fig_tab/1205093f1.html#close)

Previously, pharmacologic inhibition of MYC—a transcription factor that is a master regulator of diverse cellular functions with a role in a range of human cancers—was not considered possible. OTX015 is the first BRD2/3/4 inhibitor to enter clinical trials.