Angiopoietin inhibitor, trebananib, did not extend overall survival (OS) in a Phase 3 study in ovarian cancer. In the TRINOVA-1 trial of 900 women with recurrent ovarian cancer following platinum-based chemotherapy, patients receiving trebananib plus paclitaxel had a 19.3 month overall survival versus 18.3 months OS for women receiving paclitaxel, alone.  The difference was not statistically significant.

Overall survival was the secondary endpoint of the study. The primary endpoint, progression-free survival (PFS), was met with women receiving trebananib having a PFS of 7.2 months versus 5.4 months in patients receiving paclitaxel, alone, which was statistically significant.

Data from another trial in the recurrent platinum-resistant population (TRINOVA-2) is expected in Q4 2014. Data from a trial evaluating trebananib in combination with first-line chemotherapy treatment for patients with ovarian cancer (TRINOVA-3) is expected in 2015.

Let’s hope that these studies are positive.

Trebananib is a peptibody that blocks angiopoietin-1 (Ang1) and angiopoietin-2 (Ang2), which are critical chemokines in angiogenesis. 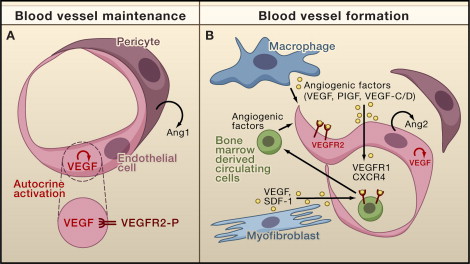 Paracrine and Autocrine Effects of Growth Factors in Capillaries (A) During steady-state conditions paracrine angiopoietin-1 (Ang1) and low levels of paracrine vascular endothelial growth factor (VEGF) are produced by pericytes and other cell types associated with the endothelium. Lee et al. (2007) show that VEGF produced by endothelial cells promotes intracellular autocrine stimulation of VEGFR2 that supports endothelial cell survival. (VEGFR-2-P, phosphorylated VEGFR2.) (B) Several pathways are activated during the formation of new blood vessels (angiogenesis). VEGF production increases in response to ischemia/tissue hypoxia that is in part responsible also for autocrine production of Ang2 involved in pericyte detachment (Yancopoulos et al., 2000). VEGF and placental growth factor (PlGF) as well as stroma-derived factor-1 (SDF-1)—produced by perivascular myofibroblasts—recruit mononuclear cells into the perivascular space by binding to the receptors VEGFR1 and CXCR4, respectively (Grunewald et al., 2006 and Luttun et al., 2002). These cells and related macrophages produce additional angiogenic factors including VEGF, VEGF-C, and VEGF-D, and they may in some cases be responsible for why tumors are refractory to continued anti-VEGF treatment (Shojaei et al., 2007).

Ang1 and Ang2 bind to the Tie receptor on endothelial cells and help to drive new vessel formation. 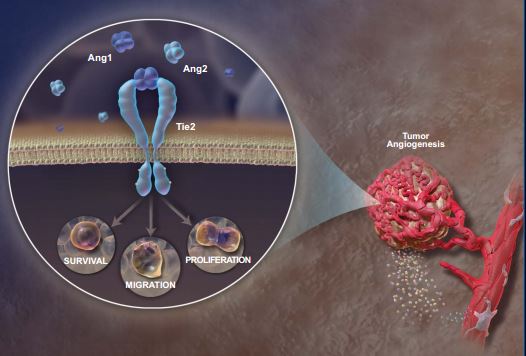 Tumor angiogenesis is necessary for tumors to grow beyond a limiting size. Angiogenesis is initiated by the “angiogenic switch,” which involves a complex array of signaling molecules, such as VEGF, PDGF, and angiopoietins, acting on multiple cell types. Evasive mechanisms may permit tumors to grow and progress despite aims to prevent VEGF signaling, reflecting the existence of alternative proangiogenic pathways. The angiopoietin axis represents a separate pathway with distinct functions from the VEGF axis. Signaling via the angiopoietin axis, comprised of the ligands Ang1 and Ang2 and the Tie2 receptor, is essential for tumor angiogenesis, regulating a wide range of endothelial cell activities that impact tumor vascular architecture. Additionally, the ability of angiopoietins to regulate lymphangiogenesis may also contribute to tumor metastasis. Thus, angiopoietins play a distinct role in modulating tumor angiogenesis. As a result, the angiopoietin axis may represent a potential pathway for therapeutic strategy in cancer.

Peptibodies or peptide-Fc fusions are an attractive alternative therapeutic format to monoclonal antibodies. They consist of biologically active peptides grafted onto an Fc domain. This approach retains certain desirable features of antibodies, notably an increased apparent affinity through the avidity conferred by the dimerization of two Fcs and a long plasma residency time. Peptibodies can be made in E. coli using recombinant technology. 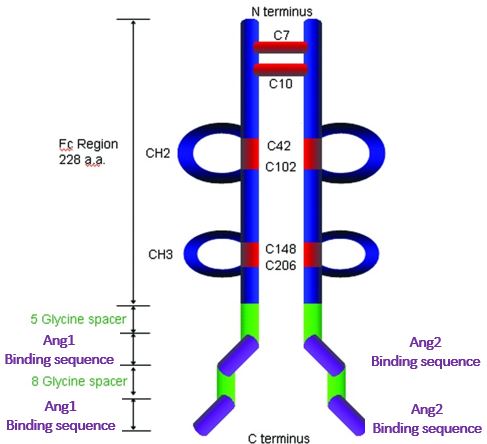 Structure of the prototypical peptibody. This diagram of AMG531/romiplostim/Nplate has been modified to hypothetically illustrate Ang1 and Ang2 binding peptide placement within a peptibody construct . Two thrombopoietin binding peptides separated by an eight-glycine spacer are fused to the carboxy-terminal end of the IgG1 heavy chain. A five glycine linker separates the peptide and IgH.