The drug called Cyramza, is approved for stomach cancer.  It had some benefit in a lung cancer study, but also failed in breast cancer studies.  http://www.fiercebiotech.com/story/lillys-key-franchise-drug-ramucirumab-flops-phiii-liver-cancer-study/2014-06-11

Intrestingly, bevacizumab, which targets VEGF, is a very successful product, called Avastin (by Genentech). that is approved for use in colorectal, kidney, lung, cancer and glioblastoma.

The biology behind this is interesting.  Avastin binds to the VEGF molecule, itself.  VEGF is secreted by myofibroblasts and tumor macrophages and is responsible for inducing the maturation of endothelial precursor cells in the tumor.  This leads to tumor capillary formation, which is critical for growth, invasion, and metastasis.  VEGF is also released from the stroma by MMP-9 (matrix metalloproteinase-9).

VEGF binds to one of 3 different receptors on endothelial cells – VEGFR-1 (Flt-1), VEGFR-2 (Flk-1/KDR), and VEGFR-3 (Flt-4), and then triggers internal signaling cascades driven by its cytosplasmic tyrosine kinase.  As the figure shows, there are multiple ways to disrupt this axis – blocking VEGF-ligand, blocking the VEGF receptor(s), or blocking the internal signaling cascade.

The difference between the activity profile of bevacizumab (Avastin), which binds to VEGF-A, and Ramucirumab (Cyramza) is likely due to the fact that the latter blocks the signaling of only the VEGFR-2 receptor, therefore, it is more selective. [Afilbercept (Eylea), a fusion protein made of binding domains to VEGF and an FC portion of a monoclonal antibody) binds to VEGF-A.] 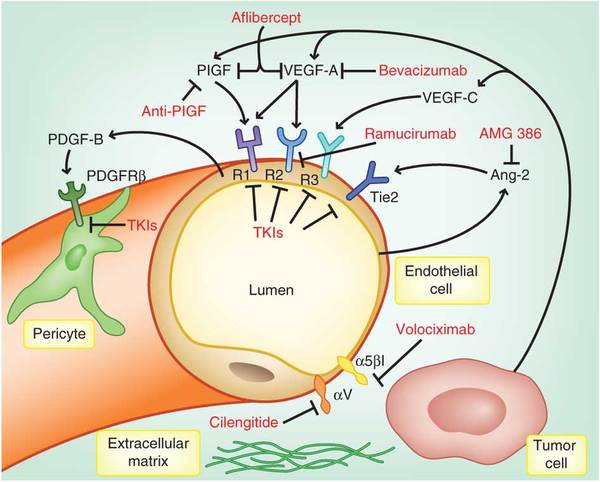