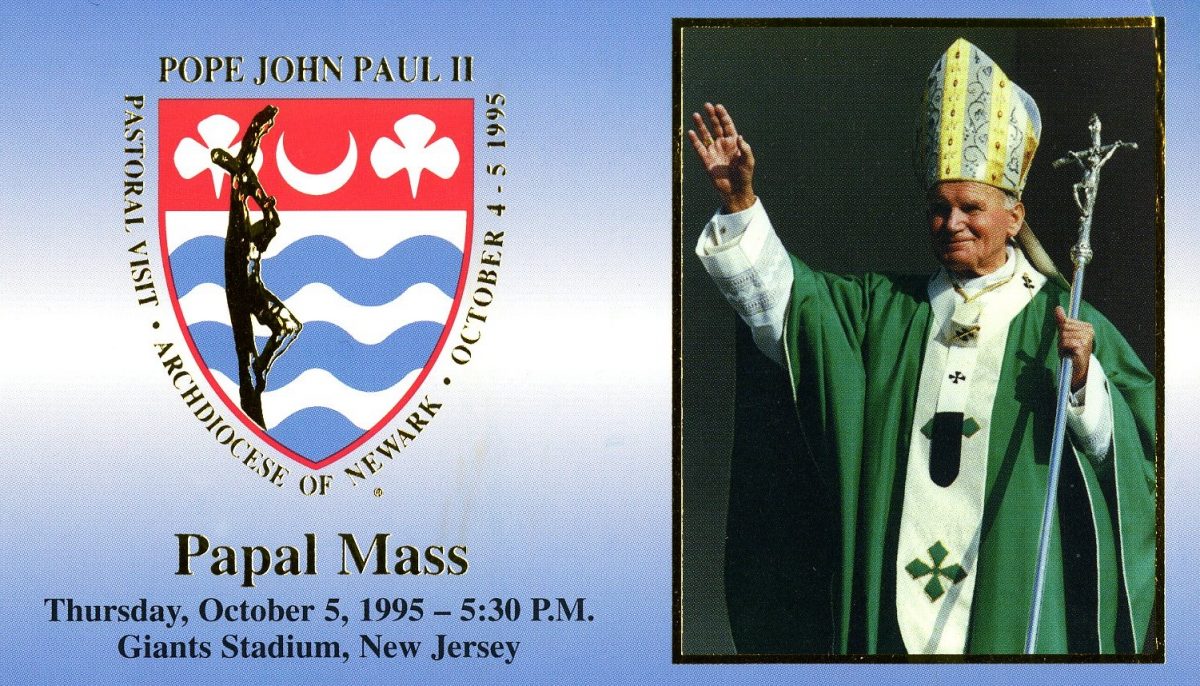 Sto Lat! This was a typical greeting shared by Pope Saint John Paul II whose words and outreach touched millions of individuals around the world during his lifetime and beyond.  This week marks a milestone for the local community when Pope Saint John Paul II visited the Eastern United States between October 4-8, 1995 with a special excursion to Newark and surrounding communities during the first two days of this much anticipated spiritual pilgrimage.

The choice to visit Newark was well-summarized by Mr. Jerry Filteau, a columnist for the National Catholic Reporter who offered the following prospectus for those unfamiliar with the deep-rooted diversity found within the city and surrounding communities:

“Newark viewed as place of hope,” In visiting the Newark Archdiocese, Oct. 4 and 5, Pope John Paul II will find a microcosm of the church and the nation . . . the archdiocese has 11 distinct offices just for racial and ethnic apostolates — Hispanics, African-Americans, Chinese, Filipinos, Haitians, Irish, Italians, Koreans, Poles, Portuguese and Vietnamese.  The Newark Archdiocese’s Catholics are the local teachers and retail clerks, police and meat cutters, homemakers and shop owners.  They’re the airline employees, truckers, railroad workers, shippers and dockworkers of Newark, Jersey City, Elizabeth and Bayonne, one of the nation’s busiest transportation hubs. They’re the professionals and corporate executives who live in affluent Bergen County suburbs . . . “

In regard to the first chapter of the journey, Pope Saint John Paul II arrived at the Newark International Airport and met with various dignitaries prior to his first major talk before the United Nations General Assembly as a prelude to his day of activities in the “Brick City’ and environs. 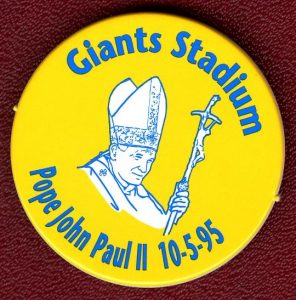 The morning of October 5th Pope Saint John Paul II celebrated Mass at Giants Stadium in East Rutherford before 85,000 individuals where Pope Saint John Paul II in his homily expressed those present and millions watching on television that “Today we are celebrating the Good News of God’s Kingdom here in Giants Stadium, in the Archdiocese of Newark in New Jersey – ‘The Garden State’ . . . “ which was greeted with enthusiastic applause.  Moreover, he reminded the assembly of the ways in which the church has “made a home” in this country, embracing people of many different cultural and ethnic backgrounds. Pope Saint John Paul II delivered his sermon during an unforeseen downpour in which he quipped to the assemblage that: “I see the people of New Jersey know how to praise God in joyful praise and song, even in the rain.” . . . “water drenched faithful that “water is a sign of life, a sign of God’s blessing!”  This provided a graceful note upon which to end the ceremony and inspire the crowd. 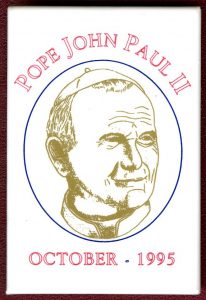 That evening, Pope Saint John Paul II celebrated evening prayer at the Cathedral of the Sacred Heart located in downtown Newark. On this occasion, the edifice was elevated to Minor Basilica status to henceforth be known as the Cathedral Basilica of the Sacred Heart.  This marked an enduring monument to the brief, but memorable time that Pope Saint John Paul II spent in our neighborhood.

The New Jersey Catholic Historical Commission (Headquartered within the Monsignor William Noé Field Archives & Special Collections Center) is also celebrating this occasion during early October with commemorative posts that are archived for reference and found on our Facebook Page via the following link: https://www.facebook.com/NJCHC

In addition, along with our Manuscript Collection on the Visit proper there are more resources related to Pope Saint John II (along with other Pontiffs over the centuries) can be found here via our ArchivesSpace holdings catalog . . .

For further information on Papal History and any aspect of Catholic New Jersey please contact us by e-mail at:  Archives@shu.edu or via phone at: (973) 275-2378.