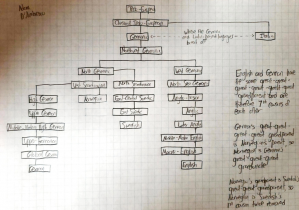 In addition, the way in which people were referred to the questionnaire may also have affected the results. For example, if people were referred to the study, there may have been a bias of including those (such as those interested in linguistic anthropology) who had interests in languages, those who already knew a lot of languages, or those who were being exposed to the languages, perhaps from their peers/friend groups. In addition, the particular mix of students being admitted to Seton Hall each year (perhaps some years were more diverse), may also have been reflected in the 2017 online data.

Hello! Recently I have been looking at the 2016 index card data and the 2017 online data on the Language Maps and Language Clouds blog. While comparing the data from the two posts I realized that there are benefits and drawbacks to each set. The 2016 index card data has a larger focus on the proficiency of the language. It also gives insight into what context the language may have been used in, which can be insightful when mapping the origins of the language. The 2017 online data has a larger focus on the residences and how the participants heard about that language.

However, the 2016 index card data set does not go into depth about the region: where they may have picked up on the language. On the other hand, the 2017 online data set does not have a quantifiable way to measure how proficient a person is in that language. They merely wrote a bit about the language. I personally prefer the 2016 index card data set. It gives insight into region, proficiency, and context in an organized and quantifiable manner. Furthermore, I noticed that most of the languages in the data were English, Spanish, French, German, and Italian. It made me wonder if the abundance of these languages is caused by the fact that all these languages are taught in high schools in the United States or if there is a higher density of people in this area originating from the countries that speak those languages. It is something that could be investigated in the future.

Here we are, deep in the year of the COVID pandemic that changes a lot of our speech interactions. As I write this is July 2020, the opportunity to work on existing data becomes a welcome gift. Here are archived clips from our chat with David Kraiker that surprisingly continue to be relevant, starting with a question from Monet.

Monet asked David how he got started at the Census Bureau (2:48):

Adam asks about the future of language data and the American Community Survey or ACS  including our favorite Census Data table B16001 (1:52):

Cece asks about the citizenship question in the 2020 Census as well as the ACS; David discusses at length how the Census aggregates data in order to protect privacy (2:53):

When it comes to language, there are many distinct levels of proficiency, ranging from being able to identify a language you overhear to being able to speak it fluently. Having these distinctions is important because it lets us collect data that we can use to get a general sense of a what languages people speak in a sample and see how they gauge their proficiency and if it falls under the same category as ours. However, it is often difficult to see where a person falls on the spectrum. END_OF_DOCUMENT_TOKEN_TO_BE_REPLACED

In order to properly assign random identification numbers to those who contributed specific sets of data. I truly wanted randomly computer-generated numbers not just a 1-10 count. However, I did not know how to ask Excel to do this for me, so I consulted the internet. I googled “randomly generated numbers excel” and got a few promising articles and set to work learning. One of the best videos I found was from a youtuber known as Doug H. who specializes in excel and its functions, he is amazing! What most of the articles asked was to use the (=RAND) command which I found worked perfectly to generate a single random number, however I needed a lot more. Since the function needed a number minimum and maximum, I went with the classic 1-100; (=RANDBETWEEN(1,100)).

END_OF_DOCUMENT_TOKEN_TO_BE_REPLACED

On 3 December 2018 the Language Maps, Language Clouds team had the opportunity to interview David Kraiker of the US Census Bureau who has visited our classroom in the past to share free ways to use ACS language-related data. Below is an overview of the conversation; boldface sections summarize the LMLC team’s questions. To listen to the audio files, click here.

END_OF_DOCUMENT_TOKEN_TO_BE_REPLACED

One of the concepts learned in Linguistic Anthropology Fall 2017 was the idea of a global language which is a language spoken by many people across the world as it holds a significant weight to it in government, education, or other social areas. Currently, the global language is English, more specifically, American English, with hundreds of millions of speakers. It’s not surprising as English is a common means of communication in business and scientific journals but how did it become a global language?

A mini history lesson needs to be said here as British English was the global language for a while. The phrase “The empire on which the sun never sets” was absolutely true given the colonial reach of the British Empire on every continent. Such a global presence and vast amount of resources meant that they were not only a military power but a social power too. Through their own policies they instituted mandatory teaching of English in some parts of the Empire. Since they were also a regional power, people were in a way coerced to learn the language of those who were dominating them.

END_OF_DOCUMENT_TOKEN_TO_BE_REPLACED

In one of our textbooks for Linguistic Anthropology, Language in Society, the author Suzanne Romaine dedicates a part of chapter 2 in exploring the topic of language death. Language death occurs when a language ceases to be spoken and used by people, rendering it non-existent in terms of communication between others.

Language death is a scary concept as it can really happen to any language. What causes this to happen has been debate by linguists, from minority communities being suppressed and overridden by majority force in society, to a phenomenon called “language shift” where a community starts off as bilingual but gradually loses their native tongue.

END_OF_DOCUMENT_TOKEN_TO_BE_REPLACED

One of the most fascinating concepts learned in Linguistic Anthropology Fall 2017 is that of the language of the powerful and the powerless. Powerful language is characterized by being more active, assertive, and commanding while powerless language is more hesitating, unsure, and can be characterized by self-doubting. To give an example, a powerful statement would be “Let’s go to Chili’s this Tuesday” while a statement marked by powerlessness can be characterized as “Uh I guess I’m in the mood for Chili’s but I wouldn’t mind going somewhere else, what do you think?”. Notice the difference? The first sentence is more of a “I will” while the second is more doubtful but it also relates to the way it’s uttered. Tone is all too important, while going over the question part of the statement, did you imagine it being spoken in a higher tone with an unsure inflection? Those are points to be mindful of when detecting whether a person is speaking with a powerful or powerless speech.

END_OF_DOCUMENT_TOKEN_TO_BE_REPLACED

Data is fun! Excel is a friend with wonderful shortcuts! Those words have been rarely if ever uttered in the English language but it’s actually true in a way. As the merits and cons of using Excel has been reported before in the blog, I figured it is good to carry on that tradition. Working with self-reported data in this study is an experience that I can ever forget and I believe I can say the same for my fellow student researchers’. The data that we worked with provides insight into how people come into contact with various languages through their life experiences. It’s intimate in its own way as you really get to see and understand people’s lives and shared stories.

But then comes the transcribing and coding part of research which is an interesting ride on its own. You see, Excel, our primary mode of transferring the data on flashcards, is a very handy tool but we had to make sure that ALL the data was copied over. END_OF_DOCUMENT_TOKEN_TO_BE_REPLACED

One of the great advantages of being a part of this research is learning the amount of languages a person knows, understands, speaks, or just able to identify. You learn that your classmates are bilingual, trilingual, or even quadrilingual! The knowledge of being able to communicate in more than one language is a fascinating subject for linguists and was discussed heavily in our Anthropology class. Indeed, this whole research is based on delving into this area and obtaining more information about it.

People who are bilingual though, or others who know more than two languages, aren’t as uncommon as one expects, especially considering a person’s geographical location. The interesting part about gathering data from Seton Hall students is that the campus comprises a mixed ethnic/racial population with students coming from diverse backgrounds. Information on this shows a range of about 45%–50% of students identifying as belonging to non-white minority backgrounds! So to discover that the majority of data collected indicates that students are overwhelmingly versed in more than one language is astounding, especially given students understanding languages that aren’t as well-known as others, such as Uzbek as documented from one student.

END_OF_DOCUMENT_TOKEN_TO_BE_REPLACED

The field of linguistics has had many different perspectives on the topic of language based on a time period’s available evidence. As it was taught in Linguistic Anthropology, this field went through many viewpoints, such as evolving from historical linguistics to descriptive linguistics.

Our knowledge of linguistics keeps evolving with time and accurate evidence. Nothing can be a more apt example of this then the debate over how language forms between two great scientists, B.F. Skinner and Noam Chomsky. To start off with, Skinner is more widely known in the field of Psychology as one of the pioneers of Behaviorism but as mentioned previously,  he also theorized about language development.  He spoke on how children learn language from the environment around them, mainly in a behaviorist framework. Basically, as a child learns new language skills, social influences will use reinforcement to help their learning move along, such as a child saying the word “book” and their teacher nods and rewards them for saying the right word and identifying the right object being focused on.

END_OF_DOCUMENT_TOKEN_TO_BE_REPLACED

One of the biggest challenges in working with qualitative data such as the very self-directed and open ended responses that our participants provided, is interpreting said statements in a way that generates useful data. I have come to observe that in this particular study, the relatively vague direction prompt that was used when administering the survey (something to the effect of “make a statement about each language that you’re aware of”) yielded responses that were either very informative or very (very) vague. Because we asked participants to hand write their responses on index cards, as opposed to having someone else interview and record their answers, or having them use a digital answer form (like the one found elsewhere on this blog), we also had to contend with some instances of unclear or illegible handwriting. Though deciphering somebody’s handwriting ranks relatively low on the scale of challenges that crop up with qualitative research, it can be nonetheless frustrating. 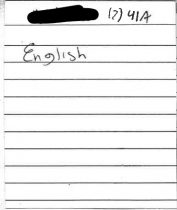 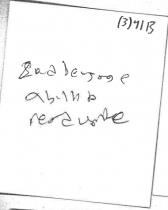 END_OF_DOCUMENT_TOKEN_TO_BE_REPLACED

Fooling around with Tableau, I found this cool feature that literally creates clouds! Take a look at this.