Neoantigens result from mutations occurring during tumor growth, are recognized as foreign and differ from native antigens to which the immune system is tolerant. Mounting evidence suggests that immune rejection of tumors, for example that which is seen with checkpoint modulators, may be mediated by recognition of neoantigens.

The clinical relevance of T cells in the control of a diverse set of human cancers is now beyond doubt. However, the nature of the antigens that allow the immune system to distinguish cancer cells from non-cancer cells has long remained obscure. Recent technological innovations have made it possible to dissect the immune response to patient-specific neoantigens that arise as a consequence of tumor-specific mutations, and emerging data suggest that recognition of such neoantigens is a major factor in the activity of clinical immunotherapies. These observations indicate that neoantigen load may form a biomarker in cancer immunotherapy and provide an incentive for the development of novel therapeutic approaches that selectively enhance T cell reactivity against this class of antigens.

How was the significance of neoantigens in cancer identified?

The inspiration to form Gritstone came from a paper that focused on the higher likelihood of a patient’s response to the checkpoint inhibitor Yervoy (ipilimumab, a monoclonal antibody that disrupts the CTLA-4/ checkpoint blockade) based on the proliferation of tumor neoantigens.

Malignant melanoma exomes from 64 patients treated with CTLA-4 blockade were characterized with the use of massively parallel sequencing. A discovery set consisted of 11 patients who derived a long-term clinical benefit and 14 patients who derived a minimal benefit or no benefit. Mutational load was associated with the degree of clinical benefit (P=0.01) but alone was not sufficient to predict benefit. Using genomewide somatic neoepitope analysis and patient-specific HLA typing, we identified candidate tumor neoantigens for each patient. We elucidated a neoantigen landscape that is specifically present in tumors with a strong response to CTLA-4 blockade. We validated this signature in a second set of 39 patients with melanoma who were treated with anti-CTLA-4 antibodies. Predicted neoantigens activated T cells from the patients treated with ipilimumab.

This shows the dual positive (IFN-γ and TNF-α) CD8+ T-cell response to GLEREGFTF and nonmutant peptide GLERGGFTF and illustrates the increase in peptide-specific T cells 24 weeks after the initiation of treatment with ipilimumab relative to baseline.

The importance of neoantigens in lung cancer was demonstrated in another study in which anti-PD-1 antibody pembrolizumab (Keytruda) was administered.

Since cancers, especially invasive cancers, have amassed sufficient mutations to block the expression of DNA repair and apoptosis genes, they accumulate mutations at a high rate. These mutations make for a rich source of novel antigens for the immune system to recognize and attack. In fact, in patients with advanced carcinomas that have mismatch repair deficiencies, greater efficacy of immune checkpoint inhibition with pembrolizumab was observed than in patients with cancers in which mismatch repair deficiency was not present:

Clinical Responses to Pembrolizumab Treatment. The biochemical responses to pembrolizumab treatment are shown in Panel A. Serum levels of protein biomarkers were measured at the start of each treatment cycle, and the values represent percentage changes from baseline. Each line represents one patient; patients were included if their baseline tumor marker values were higher than the upper limit of normal. CA-125 was used as the biomarker for one patient with endometrial cancer, CA19-9 was used for one patient with cholangiocarcinoma and one patient with ampullary cancer, and carcinoembryonic antigen (CEA) was used for all other patients. Radiographic responses to treatment with pembrolizumab, evaluated on the basis of Response Evaluation Criteria in Solid Tumors (RECIST), are shown in Panel B. Tumor responses were measured at regular intervals, and the values shown are the largest percentage change in the sum of longest diameters from the baseline measurements of each measurable tumor. Each bar represents one patient. Le DT et al. N Engl J Med 2015;372:2509-2520. 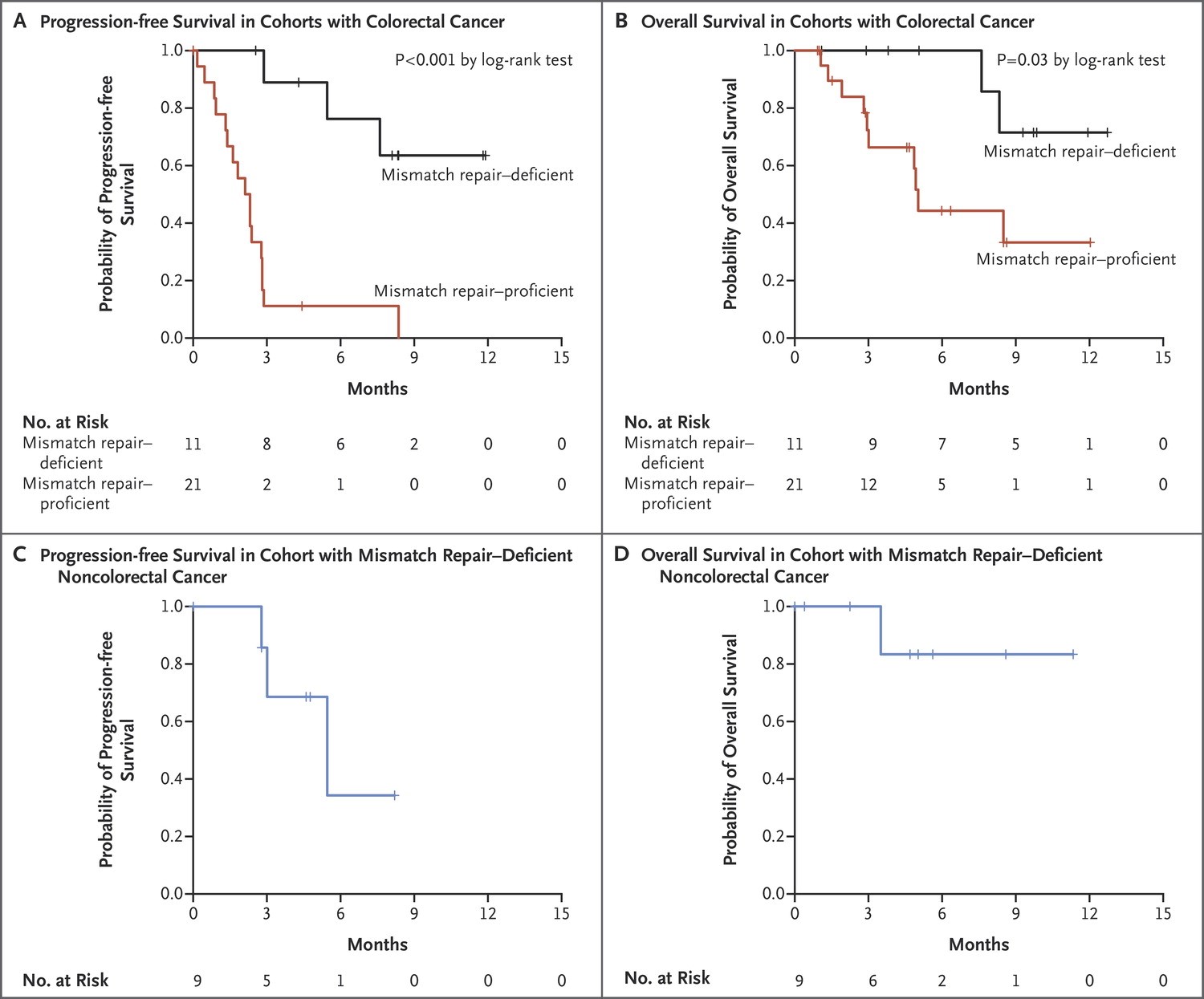 Gritstone will take tumor samples from newly diagnosed lung cancer patients, run them through DNA sequencing machines to look for specific mutations, and then select the most important markers that could serve as antigens to the immune system. Those antigens are elusive. Scientists know tumors have a way of mutating over time, creating all sorts of odd markers that the immune system may or may not recognize as worthy of destruction.  Once the patient’s specific “neoantigens” are selected, they’ll be incorporated into a vaccine. Patients will still likely get anti-PD1 antibodies (Opdivo or Keytruda).