Ravenscroft was the childhood home of philosopher Bertrand Russell. More specifically, it is located in Trelleck, a village situated in Monmouthshire, a county in southeast Wales. Today, the home is now called Cleddon Hall. The original owners of the home were John Russell, Viscount Amberley and Katherine Russell, Viscountess Amberley. On the website BBC.co.uk, the books and literature section reveals that “Katherine Louisa Amberly was the daughter of the second Baron Stanley of Alderly and Bertrand Russell’s father was the son of John Russell, the first Earl Russell who was in turn the son of the 6th Duke of Bedford” (Wales Arts). The Russell-Amberley family held a high status and their wealth represented the magnificence of their home.

How The Amberleys Acquired The Home

In an online document titled the Bertrand Russell Society Bulletin, the Amberley couple didn’t originally own or live in Ravenscroft. Sheila Turcon states, “They visited Ravenscroft for the first time on 14 April. It was then owned by a Mr. Morris. Amberley liked it at once but his wife Katherine did not” (11). Out of desperation for a place to live, they bought the home and moved in with their children Frank and Rachel (Bertrand wasn’t born yet).

Ravenscroft: A Center of Radicalism against British Norms

Russell’s childhood in the home was cut short due to his parent’s subsequent deaths during his adolescence. However, Ravenscroft or Cleddon Hall as it is now called, was known for very radical inhabitants. His father was “an atheist and his mother was having a relationship with his tutor inside the home and with the full knowledge of her husband. In other words, it was an open marriage” (Norwood). They definitely went against the grain as far as what would have been socially acceptable in 19th century Britain. Norwood also points out that the Russells supported “birth control” (Norwood).

In the book, Bertrand Russell: The Spirit of Solitude 1872-1921, author Ray Monk states, “Generally, though, life at Ravenscroft for the first year of Bertrand Russell’s life was quiet and even idyllic” (8). The family largely kept to themselves, but “they did often visit relatives at various country homes” (Monk 8). However, despite the relative quietness of Russell’s early life, his parents had unconventional views on Christianity and the dominant religious and political views of the era. On this note, Bertrand Russell’s older brother, Frank, states, “‘I do not remember ever being taken to church or having the name of God inflicted upon me’” (Monk 8). Russell’s parents were pretty much eccentric, fun loving people who went against the grain of what was socially acceptable. 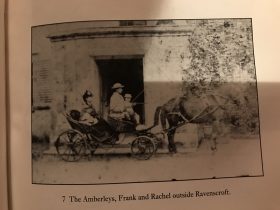 Examples of Great Times at Ravenscroft

In Caroline Moorehead’s book, Bertrand Russell: A Life, she notes that the Russell-Amberley family participated in “otter hunts and croquet parties, cottage flower shows and the picking of bilberries” (12). The Russell children were allowed to run around and do whatever they wanted so long as they were “useful and independent” (Moorehead 13). Frank, the oldest and most independent, was said to have “climbed on to the roof and hide if anything displeased him” (Moorehead 13). Rather than punish him, Bertrand’s parents instead instructed the “governess that he be ‘kept back’ but not contradicted” (Moorehead 13). 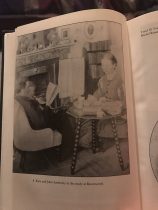 An omen coinciding with the dark times at Ravenscroft came in the form of the Amberlys’ visit to a “remarkable medium” (Monk 8). The medium they visited, Mrs. Acworth, performed a “séance in which the spirit of Janet Chambers spoke through Acworth to John. Janet Chambers was the former lover of John who he might have married had she not died suddenly in the autumn of 1863” (Monk 9). Nothing bad came of this encounter, but the next spirit was considered to be “James II, that figure of contempt for all true Whigs” (Monk 9). For point of reference, James II was a Roman Catholic and John and Katherine were vehemently against Catholicism and especially due to their political affiliation as Whigs. In any case, the Amberleys’ ridicule of the spirit may have cemented a bad omen for the Amberley family’s lives in Ravenscroft.

The End of the Good Life

The Amberley family was first struck hard by the death of John Stuart Mill, a philosopher, economist, and all around liberal. He was also heavily admired by Jon and Katherine and later became their friend and eventually the “godfather to Bertrand Russell” (Monk 9). This struck John Amberley hard to the point that he experienced an “epileptic seizure” the first step of his later depression and eventual death (Monk 9). The next issue to rock Ravenscroft was the arrival of Douglas Spalding, the new tutor for Bertrand’s brother Frank.

The Strange Antics of Douglas Spalding

Douglas Spalding committed several actions that certainly upended the once relatively normal atmosphere of Ravenscroft. In regards to these actions, Moorehead states, “Spalding rapidly turned the drawing room and library into a barnyard, allowing his experimental chickens to wander at will and insisting on keeping a hive of bees indoors” (13). Based on Monk’s textual observations, the family and their guests were not welcoming of Spalding’s experiments and considered him “a nuisance and a rather sinister, grotesque figure” (10). However, John and Katherine accepted his scientific endeavors and participated in a unique relationship with the man.

The “Love” Triangle in Ravenscroft

Now the extent of the relationship between Katherine and Douglas is perceived differently between Monk and Russell himself. In The Autobiography of Bertrand Russell, Russell considered the relationship as more a sign of pity for Spalding’s condition than a genuine love. He states:

Apparently upon grounds of pure theory, my father and mother decided that although he ought to remain childless on account of his tuberculosis, it was unfair to expect him to be celibate. My mother therefore allowed him to live with her, though I know of no evidence that she derived any pleasure from doing so. (Russell 10)

Again, aside from Bertrand’s parents, none of the people living in the house seemed to have much of a favorable opinion of Douglas Spalding so there might have been some bias towards the man on Russell’s part. I say this because in Monk’s book, as “John’s sicknesses progressed while the family visited Rome, Katherine and Spalding visited museums and galleries together” (11). There is no proof of whether Katherine had feelings for Spalding as he did for her but at the very least, she consented to sleeping with him on occasions and her husband was perfectly fine with the arrangement.

Death of the Family and Bertrand’s Departure from Ravenscroft

Bertrand first left the home when a case of “diphtheria spread among the family” (Moorehead 14). While he did not get sick, his mother and sister both died of the affliction. A year later, Bertrand’s father died after a long battle with sickness and depression and Spalding was one of two originally tasked with caring for Bertrand and his brother Frank until his grandmother discovered what had went on in the home and took them away to Pembroke Lodge. Spalding, already severely sick from tuberculosis, died soon after and Bertrand was never permanently situated in Ravenscroft ever again.

Graham Norwood states, “The philosopher lived there sporadically until the Twenties, after which the property was rented out and slid into disrepair” (Norwood). Also, based on Russell’s autobiography, he knew when the home’s name was changed and he pronounced Cleddon Hall as “Gleddan Hall” (Russell 10). The name of the house was “changed sometime between 1876 and 1887 and was later bought by Arthur Bosanquet who kept it in his family until 1957” (Turcon 12). The house had since been bought on and off but there was a brief time in 1953 when “Russell visited the property and remarked that the house was in good repair but the grounds had not been kept up” (Turcon 12). The last buyers of the home made extensive repairs to the house’s foundation as no one had kept up maintenance of the home since the buyers after Bosanquet had it last. Since the year 2012, the house has no longer been put on the market.