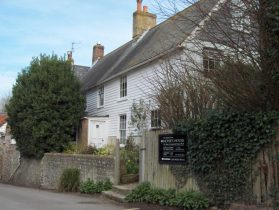 Monk’s House is an 18th century cottage in the village of Rodmell, England. Virginia Woolf and her husband Leonard Woolf bought the house in 1919. The Woolf’s originally lived there only part time, but after an air raid destroyed their flat in Bloomsbury they moved out to the country full time. The Woolf’s made the house their own, and did many reparations on it from the time they move in. they repaired and improved the kitchen, installed a system for hot water, and bought an adjoining field to preserve the view of Mount Caburn. The house was also expanded by two additional floors in 1929. (Eastoe) 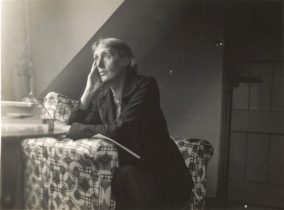 Virginia sitting in an armchair at Monk’s House

Virginia and Leonard, still firmly entrenched in the Bloomsbury Group, received at Monk’s House many visitors during this time, including T.S. Eliot, E.M. Forster, Roger Fry, and Lytton Strachey. “Monk’s House also received visits from poet, novelist, and garden designer Vita Sackville-West, with whom Virginia had a dalliance… The guests liked to sit on the terrace outside Virginia’s writing lodge and play bowls on the lawn” (Eastoe).

“The interior design of the cottage hints at its links with the Bloomsbury Group. Virginia chose the distinctive pea green of the sitting room – green was her favorite colour – though her sister Vanessa laughed at her choice. Nevertheless she and her lover Duncan Grant painted the table and chair backs for her, and it was her that Virginia liked to sit and smoke a cigar. Vanessa also painted the fireplace tiles in Virginia’s bedroom as a tribute to To the Lighthouse. Virginia wrote in her bedroom, on a wooden board, when she was unwell, moving her chair to catch the views. Leonard, she complained, had to be torn away from gardening. Despite her tragic end Virginia adored the house: ‘I had so much profound interest to write here – a dialogue of the soul with the soul – and I have let it slip – why? Because of feeding the goldfish, of looking at the new pond, of playing bowls… happiness'” (Eastoe).

Virginia often did her writing in a small lodge at the bottom of the garden. Her novels Jacob’s Room (1922), Mrs Dalloway (1925), To The Lighthouse (1927), Orlando (1928), The Waves (1931), The Years (1937), Between The Acts (1941) and many other works were composed on this property. She spent many hours composing these novels as well as essays and letters in her writing shed, and she enjoyed having solitary time to think and stroll through her garden. Virginia was an amateur horticulturist, and though she loved the garden it was not her passion to cultivate it so much as it was Leonard’s. 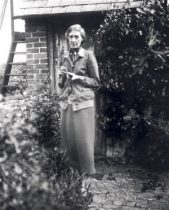 Virginia outside of her writing shed.

“For Leonard, who started off as an amateur but became an expert, developing and tending the garden was totally absorbing. He would graft his own fruit trees, tend to and add to his massive collection of cacti and train his sweet peas in the way his sister-in-law, Vanessa Bell, did at Charleston, 10 miles down the road. He grew copious fruit and vegetables with the help of Percy Bartholomew, his gardener, keeping immaculate records (including detailed costings) and selling the surplus at the Women’s Institute market. When Virginia and Leonard were in London, a hamper of produce was sent up each week. Leonard was keen to learn and founded the Rodmell Horticultural Society in 1941” (Glendinning) 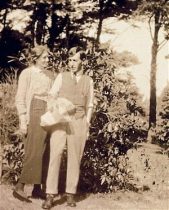 Virginia and Leonard in the garden

It becomes incredibly evident that as much as the house itself was a retreat from city life, the real pleasure of living there for the Woolf’s came from the garden that they so lovingly tended. In letters to friends, Virginia wrote “The point of it is the garden. I shan’t tell you, though, for you must come and sit there on the lawn with me, or stroll in the apple orchard, or pick – there are cherries, plums, pears, figs, together with all the vegetables. This is going to be the pride of our hearts I warn you” (Eastoe).

The Woolf’s retreat at Rodmell was a convenient ten minutes away at Charleston, which served as a meeting place of sorts for many members of the Bloomsbury group. She had no children of her own, and instead chose to direct much of her maternal energy to her nieces and nephews. Bell’s oldest son, Julian, was Woolf’s favorite; he would write poetry and send it to Woolf for criticism, and she dealt him a great amount of encouragement. In this letter, she writes “Thursday. My dear Julian. I like the poem very much. It still wants CURRENCY I think. When did you write it? It shall be the cornerstone of my new library at Rodmell. But this is to say—please be here 7:30 sharp tomorrow (Friday) as we want you to drive Rachel & us to a restaurant” (Butler)

In March 1941, Virginia committed suicide by drowning herself in the nearby River Ouse. Her suicide note to Leonard was written in the writing shed where she did all of her writing, and drafts of it can be found in her journal. In full, it reads:

I feel certain that I am going mad again. I feel we can’t go through another of those terrible times. And I shan’t recover this time. I begin to hear voices, and I can’t concentrate. So I am doing what seems the best thing to do. You have given me the greatest possible happiness. You have been in every way all that anyone could be. I don’t think two people could have been happier ’til this terrible disease came. I can’t fight any longer. I know that I am spoiling your life, that without me you could work. And you will I know. You see I can’t even write this properly. I can’t read. What I want to say is I owe all the happiness of my life to you. You have been entirely patient with me and incredibly good. I want to say that — everybody knows it. If anybody could have saved me it would have been you. Everything has gone from me but the certainty of your goodness. I can’t go on spoiling your life any longer.

I don’t think two people could have been happier than we have been.

After Virginia’s death, Leonard continued to live alone at Monk’s House until his death in 1969. Virginia’s death was publicized, and afterword Leonard received a flood of condolence letters from friends and fans alike. Grieving, Leonard wrote the following on a loose sheet of paper:

“They said ‘Come to tea and let us comfort you.’ But it’s no good. One must be crucified on one’s own private cross. It is a strange fact that a terrible pain in the heart can be interrupted by a little pain in the fourth toe of the right foot. I know that V. will not come across the garden from the Lodge, and yet I look in that direction for her. I know that she is drowned and yet I listen for her to come in at the door. I know that this is the last page and yet I turn it over. There is no limit to one’s stupidity and selfishness.”

Leonard buried Virginia’s ashes under one of the two intertwined elm trees in their backyard, which they had nicknamed “Virginia and Leonard”. He marked the grave with a stone tablet, engraved with the last line from her novel The Waves: ““Against you I fling myself, unvanquished and unyielding, O Death! The waves crashed on the shore.”. He would be buried next to her after his death (Glendinning).

Today, Visitors can still visit Monk’s House in the spring and summer months. The property and garden are maintained by the National Trust. 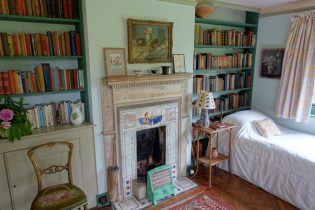 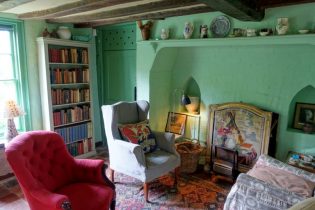 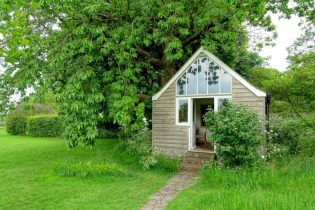 the interior of Virginia’s writing lodge

One thought on “Monk’s House”