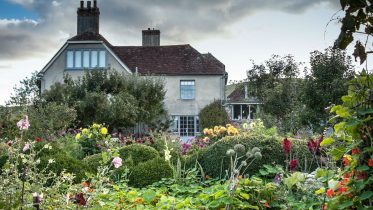 Over the years, Charleston Farmhouse was home to not only Vanessa Bell, Duncan Grant, and their family but to their extended family, their friends, and their lovers.

In 1916, Vanessa Bell and Duncan Grant moved to the Charleston Farmhouse in Sussex. Living at the house along with Bell and Grant were her two sons Julian and Quentin and Grant’s friends and lover David Garnett. Due to both Grant and Garnett being conscientious objectors of the First World War, they needed to find work on a farm otherwise they would have gone to prison. Grant and Garnett were able to find work on a farm near the Charleston Farmhouse, so that is why they chose that location to live.

Prior to 1916, Vanessa Bell had been living at Little Talland House and Asheham House with where Virginia and Leornard Woolf lived. Vanessa Bell’s husband, Clive Bell, ended up living and farming at Garsington Manor, the house of Lady Ottoline Morrell.

Throughout the war years, the Charleston Farmhouse became more than just Vanessa and Duncan’s home. It became the country retreat for the Bloomsbury group. Common visitors were Clive Bell and his companion Mary Hutchinson. Another regular visitor was Roger Fry, the art critic and founder of the Omega Workshops. Jonh Maynard Keynes visited so frequently that he had his own room in the house. Some other visitors were, Virginia Woolf, T.S. Eliot, Lytton Strachey, and E.M. Forster. All these visitors came to experience the house. Some days there would be no hot water to warm the guests. Other days, instead of ordering one turkey for 11 people, they ordered 11 turkeys. This house was always welcoming to Bloomsbury members. At this house, many Bloomsbury members were inspired and completed some of their work. One being John Maynard Keynes who wrote the book that made him famous while he was at Charleston. He wrote the book, The Economic Consequences of the Peace in 1919. Vanessa Bell

“The house seems full of young people in very high spirits, laughing a great deal at their own jokes…lying about in the garden which is simply a dithering blaze of flowers and butterflies and apples,” wrote Vanessa in 1936

Following the First World War, the house because the holiday home for Bell and Grant. With the threat of the Second World War, Vanessa Bell, Duncan Grant, and Clive Bell all decided to make Charleston their principal home.

Vanessa Bell and Duncan Grant lived at Charleston up until their deaths. Bell died in 1961 and Grant in 1978. Following their deaths, Angelica, their daughter, lived there until 1980 when she died. In that same year, The Charleston Trust was formed to preserve the house as it was in the 50s. 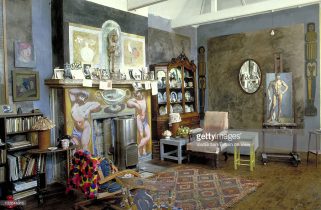 “One after another the rooms were decorated and altered almost out of recognition, as the bodies of the saved are said to be glorified after the resurrection.” Garnett in his autobiography

The house did not only provide inspiration for many literary pieces of work but it also became a hub for art and decoration. The Bloomsbury groups painted on the walls, stenciled wallpaper, and crafted curtains, fabrics, and rugs. In an interview done at Charleston Farmhouse with Vanessa Bell’s granddaughter, Virginia Nicholson, the writer Ann Geneva noted that “the rooms and furniture are covered in free flowing paintings of sensuous nudes, fruit, flowers and geometrical designs by various hands but sharing the same period flavour” (21). The main artists of the Bloomsbury group were Vanessa Bell, Duncan Grant, and Roger Fry. The art in the house is inspired by the post-impressionists.

Throughout the years of living at the house, Grant, Bell, and Fry ended up painting almost the entire house. The house was treated as if it were a canvas. The walls, tables, chairs, bookcases, and other furniture were all painted. While at Charleston, Ann Geneva noted “insistence on color and creativity comes at you from every corner of every room in the farmhouse” (21). The paintings were not conservative and were often colorful with lots of patterns.

“I’m painting flowers – one can’t resist them – when the sun comes out you can’t conceive what the medley of apples, hollyhocks, plums, zinnias, dahlias, all mixed up together is like.” Vanessa Bell to Roger Fry, 1930 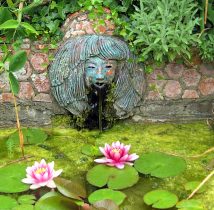 When Vanessa Bell and Duncan Grant first got the house, the garden was used for fruit and vegetable plants and trees. 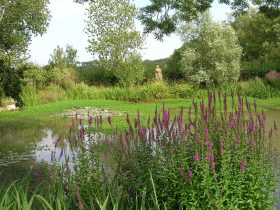 Following the First World War, Roger Fry designed a new layout for the garden so it could include more flowers and pool. The garden was to be shaped like a rectangle. As time passed, the garden slowly began to take shape. Quentin Bell contributed to the garden with mosaic pavements and pools.

Senior, Emily. “The House The Bloomsbury Group Turned In To A Working Piece Of Art.” House & Garden, 4 Oct. 2017, http://www.houseandgarden.co.uk/interiors/real-homes/charleston.Accessed 24 Nov. 2017.