Nestled near Tottenham Court Rd., London, are the Omega Workshops, which were established on May 14th, 1913 at 33 Fitzroy Square.  The Omega Workshops were an artistic and cultural hub, founded by artist and philosopher, Roger Fry, who coined Post-Impressionism.  His workshops were the first to fully embrace Post-Impressionism, which brought experimental design to Edwardian Britain, and was founded and made up of other significant members of Bloomsbury, like E.M. Forster, Virginia Woolf, Clive Bell, Duncan Grant, Vanessa Bell, and Ethel Sands.  Fry’s goal to unify artists like himself, would finally come together and soon embrace the urgency to carry out products of brash, bold, and brutal colors, and fuel the inspiration to develop original art.

“Artists must protest against the remissness and indifference of the governing classes who instead of enfrocing the adultrered foods act., stamp it all over with the givernment stamp, indicating that it is gaurenteed to be the best dairy-made butter.” -Roger Fry 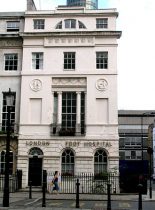 One of the unique characteristics that distinguished the products from this workshop, was that it allowed artists to anonymously contribute their work.  By prohibiting artists to sign their work, and only allowing them to label it with the Greek letter Ω Omega, it created a personal trait that was only exclusive to those involved.  The Omega is also symbolic of the end of an art era, as the omega is the last letter of the Greek alphabet.

Fry’s vision for the workshops set out to “provide an income and an outlet for artists who ascribed to the Post Impressionism aesthetic but not to socialist ideals”, which he successfully embarked on, in challenging the commercial market in domestic interiors.  Especially, given this time period, art was created for pleasure, not for money.  The Omega workshops were not solely a place of conventional art, like paintings, in fact, it covered multiple aspects of art including furniture, linens, decor for the home, rugs, and clothing.

“State should allow complete free trade in art, and refuse all subventions and all honours to artiste.” -Roger Fry

According to Fry, a work of art must have the power of making the “outsider” – the audience – “whose eyes are the least active of his senses, aware of something real and exciting, … in perfect simplicity.”   By creating authenticity in the omega products, taking a more abstract and liberated approach, it provided a place for those post WWI counterparts to enjoy the ebullient art pieces which the Omega Workshops presented.  Ultimately, putting collective minds in unison to break the conventional isolated artist in the studio, technique.

Although the Omega Workshops were short-lived and shut down in 1919 because of financial conflicts, they held a significant pivotal influence on art and interior design, ultimately being a revolutionary development during its existence. END_OF_DOCUMENT_TOKEN_TO_BE_REPLACED