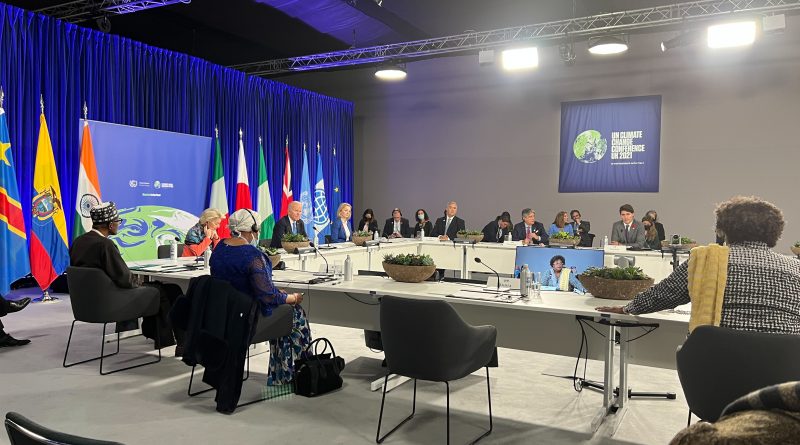 On November 12, The United Nations Climate Change Summit, known this year as COP26, came to an end in Glasgow, Scotland. The conference, which started on October 31, saw roughly 20,000 heads of state, diplomats, and activists meet in person after being delayed from last year due to COVID-19. Following two weeks of climate change negotiations, world leaders of the Conference of the Parties discussed topics such as climate impacts, fossil fuel policy, and climate finance.

Reviews on the results of COP26 are mixed. As climate change activist Greta Thunberg stated in a tweet, “The COP26 is over. Here’s a brief summary: Blah, blah, blah.” However, there are many changes coming out of COP26 that environmental activists are celebrating. Highlights of the conference include 120 countries pledging to halt and reverse deforestation by 2030, the creation of The Glasgow Climate Pact, which calls upon 197 countries to report the progress they make towards climate ambition for the upcoming COP27, and a global pledge to cut of methane emissions by 30 percent by the year 2030, reports the British High Commission.

More than 100 world leaders and signatories have promised to end deforestation by 2030, including nations of the U.S., UK, Denmark, Turkey, Canada, Japan, Italy, Colombia, Mexico, Russia, and Brazil – a nation facing mass deforestation in the Amazon Rainforest. According to BBC News, this pledge also promises $19.2 billion of both public and private funds to go towards restoration of land, wildfire relief, and support of indigenous communities. In addition, several financial corporations, such as Aviva and Schroders, have pledged to end investments in industries that are linked to deforestation. The deal gained the approval of The Forest Stewardship Council, a strong advocate of forest management, along with many other activists, as the signatory countries cover nearly 85 percent of the world’s forests. Deforestation is one of the main contributors of climate change and carbon dioxide emissions, and experts view this pledge as a step in the right direction for climate action.

A main goal of this summit was to take steps to prevent the average global temperature from rising more than 2.7 degrees Fahrenheit and to secure a pledge to reach global net-zero emissions. In order to do this, the COP26 website explains that “countries will need to phase out coal, curtail deforestation, switch to electric vehicles, and encourage investments in renewables.” According to a UN Report, Istanbul Mayor Ekrem Imamoglu is hopeful that his city’s green projects will inspire others to take action to reach net zero, stating, “Our target is to take every step to make Istanbul a carbon-neutral city resilient to the climate crisis by 2050.” Other nations are taking similar action, such as Denmark, which announced plans to halt production and cancel any licensing agreements necessary to get to net zero by 2050.

The conference also saw the adoption of the Paris Agreement Rulebook, which contains the negotiated guidelines of how countries are to reach the goals set by the 2015 Paris Climate Agreement. Agreements made in Glasgow on carbon markets will finally make the Paris Agreement fully operational and allow countries to use international carbon offsets to meet goals set under the 2015 Paris climate agreement. Kelley Kizzer, the Environmental Defense Fund Vice President for Global Climate, spoke on this accomplishment, stating, “The agreed Article 6 rules, while not perfect, give countries the tools they need for environmental integrity… Article 6 provides the rules necessary for a robust, transparent and accountable carbon market to promote more and faster climate ambition and create a further avenue for finance flows from developed to developing countries.”

Finance was perhaps one of the most debated topics at COP26, as numerous rich nations acknowledged that they have failed to meet a previously made $100 billion annual climate finance target for 2020, as stated in the COP26 decision text. Carbon Brief reports that Lorena González, the Lead of Finance at World Resources Institute, stated that all parties were somewhat “unsatisfied” with the results of finance negotiations.

COP26 was seen globally as a critical moment in climate action history. Though opinions differ regarding its overall success, the initiatives that emerged from the conference show potential. As stated by UN Secretary-General António Guterres in a press release, “I know you are disappointed. But the path of progress is not always a straight line. Sometimes there are detours. Sometimes there are ditches. But I know we can get there. We are in the fight of our lives, and this fight must be won. Never give up. Never retreat. Keep pushing forward.”