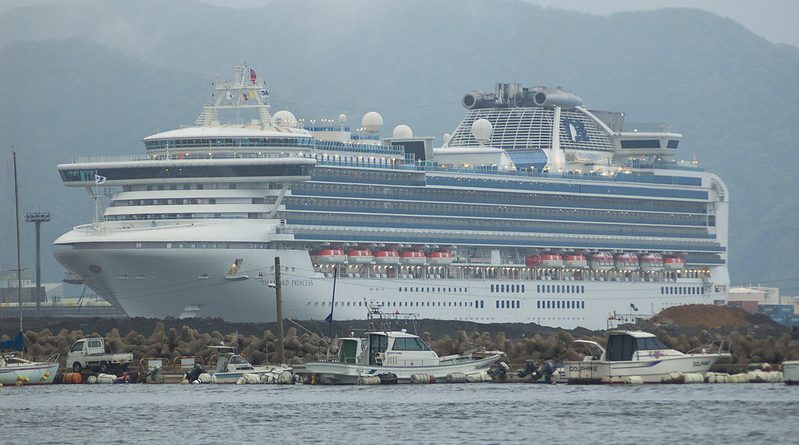 On February 20 Wired reported that two weeks after the Diamond Princess cruise ship left from Yokohama, Japan, 542 passengers and crew members tested positive for COVID-19, commonly known as the Coronavirus.

Immediately, the ship went on lock-down. The casino closed, all meals were boxed and sent to passengers’ cabins, and all on board are to be quarantined for at least 14 days. The cruise ship was headed for China, Vietnam, and Taiwan.

While the Diamond’s 2,666 passengers waited for their release, the U.S. government decided to evacuate the nearly 400 Americans on board, according to NPR. If a passenger tested positive for COVID-19, they were to remain in quarantine, and if not, they would be flown back to the United States.

On February 16, roughly 300 Americans left the Diamond to fly back to the U.S., with some passengers, one of which testing positive for COVID-19, choosing to remain on board. Upon landing, the 13 infected evacuees were immediately quarantined, and as of February 21 remain in quarantine in Omaha, Nebraska.

The New York Post describes how the horror for those infected with COVID-19 is far from over. Jeri Seratti-Goldman showcased life in the quarantine center in a video posted on Facebook. Seratti-Goldman explained how despite testing negative for the disease, she must remain in isolation while her husband Carl, who tested positive, receives care. “I’m not able to leave this room at all,” Seratti-Goldman said, “Carl and I Facetime so we can just pretend that we are together.”  Seratti-Goldman’s quarantine will last for 14 days, but there is no telling when her husband will be better.

Another cruise ship, Holland America’s MS Westerdam, may not enter any port on its itinerary due to fear over COVID-19, USA Today reports. Despite no one on the ship testing positive for the disease, passengers are being forced to remain on board.

The Detroit Free Press quotes Steve Muth, a passenger on the MS Westerdam, saying, “I think we’re headed toward Vietnam, maybe Malaysia, Cambodia—they won’t tell us just yet.” Passengers remain in the dark about when they will even get home because of the rapidly disseminating fear over the ‘coronavirus epidemic.’

The Guardian discusses how overarching fear regarding COVID-19, such as the kind causing ports to reject the MS Westerdam, contributes to worsening xenophobia toward China. The MS Westerdam is being denied simply because they stopped at a Chinese port, despite no evidence of any passenger being ill. NBC reports that Asians across the globe are being harassed on social media over the virus, which originated from Wuhan, China.