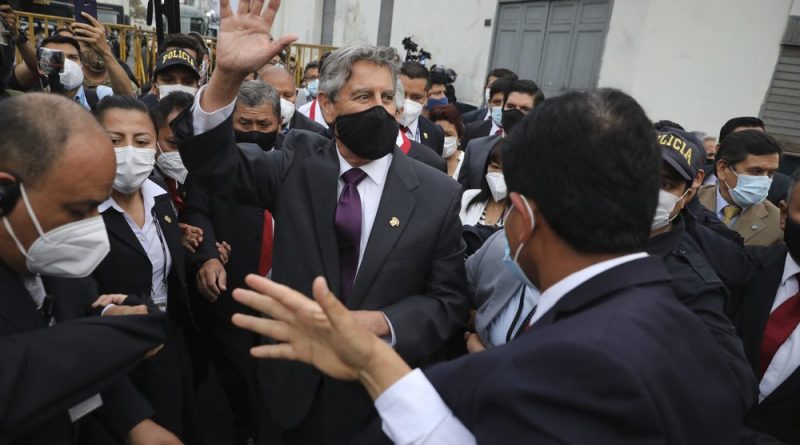 Peru has finally seen a period of relative calm after a November filled with impeachments, resignations, widespread protests and a rapid succession of three different presidents. Though many different factors dating back to the 1990s have been setting the stage for unrest, the Peruvian people took to the streets after centrist President Martín Vizcarra was removed from office by a right wing coalition in Congress.

The leader of the Congress, Manuel Merino succeeded Vizcarra as President. The push by Merino to remove and replace Vizcarra was received with considerable skepticism as reports revealed he had sought the support of military leaders in the lead up to the controversial maneuver. Vizcarra, who had ruled since 2018 when the previous President, Pedro Pablo Kuczynski, resigned after a corruption scandal. Vizcarra’s time as President was dominated by his struggle with the legislature, which sought to frustrate his attempts to pass anti-corruption reforms.

When the legislature voted to remove him from office Vizcarra accepted the action and left peacefully on the 9th of November, with Merino being sworn in the same day. President Merino was greeted by an unhappy nation as Peruvians took to the streets in protest against what they perceived to be akin to a coup d’etat. In the following days protestors, in increasing numbers, clashed with police. Demonstrators carried messages comparing Merino to the COVID-19 virus and condemned Vizcarra’s removal as politically motivated. Vizcarra was not the first Peruvian president in recent history to be marred by an allegation of corruption, but the allegations against him are seen as less credible by Peruvians. During the protests dozens were injured as they clashed with police who used tear gas and rubber bullets.

The unrest reached a fever pitch on November 14th when the public was made aware that two protestors were killed during demonstrations, sparking even further outrage among Peruvians. Former President Vizcarra condemned the killings, “My condolences to the families of these civil heroes who, exercising their right, went out in defence of democracy and in search of a better country. The country will not allow the death of these brave young people to go unpunished.”

Later the same day, in response to the deteriorating situation, nearly a dozen high ranking government officials resigned. Unable to withstand the demonstrations by Peruvians, the next morning Merino resigned from the presidency.

Succeeding Merino was the centrist lawmaker, Francisco Sagasti. Setting a new, calming tone for his administration by holding, as his first Presidential act, a moment of silence for the killed protestors. Sagasti spoke to the concerns of protestors, lauding them for their passion for democracy, and pledged to do right by the people. Sagasti, unless removed from office, will govern Peru through elections in 2021 until his term ends in July. Sagasti’s nascent term as President has seen a cooling of tensions, and he is now tasked with doing what he can to mitigate the country’s economic freefall.

The country’s output is projected to contract by a whopping 14% and as a copper mining country, whose industry has been walloped by the pandemic, has seen the world’s second highest death rate per capita.

Much of the instability is attributed to longstanding factors that include the constitution that is highly shaped by the 10 year reign of strongman President Alberto Fujimori. Fujimori’s daughter, Keiko ran on a right-wing ticket in 2016 and lost narrowly to Kuczynski. Nonetheless, the conflict in Peru is far more complicated than left versus right, as many Peruvians perceive the situation to be a clash between the corrupt and not corrupt, with politicians of many parties across the spectrum being marred by credible allegations of corruption. Both Fujimori and Kuczynski were implicated in the same corruption scandal involving Brazilian firm Odebrecht.

President Sagasti has steered clear of launching any ambitious initiatives or changes, commenting he would not seek to change the Country’s flawed constitution. In contrast, Peru’s southern neighbor, Chile, held a referendum in which Chileans overwhelmingly voted to change their Pinochet-era constitution after months of massive, violent protests. As to both satisfy the Peruvian people, while avoiding the outrage of the legislature, Sagasti has postured as a consensus seeker, and his administration is likely to continue its caretaker role until a new president is elected.

While Sagasti has managed to sooth the country, it remains to be seen how long this calm will last, and if the legislature will again act to remove yet another president.