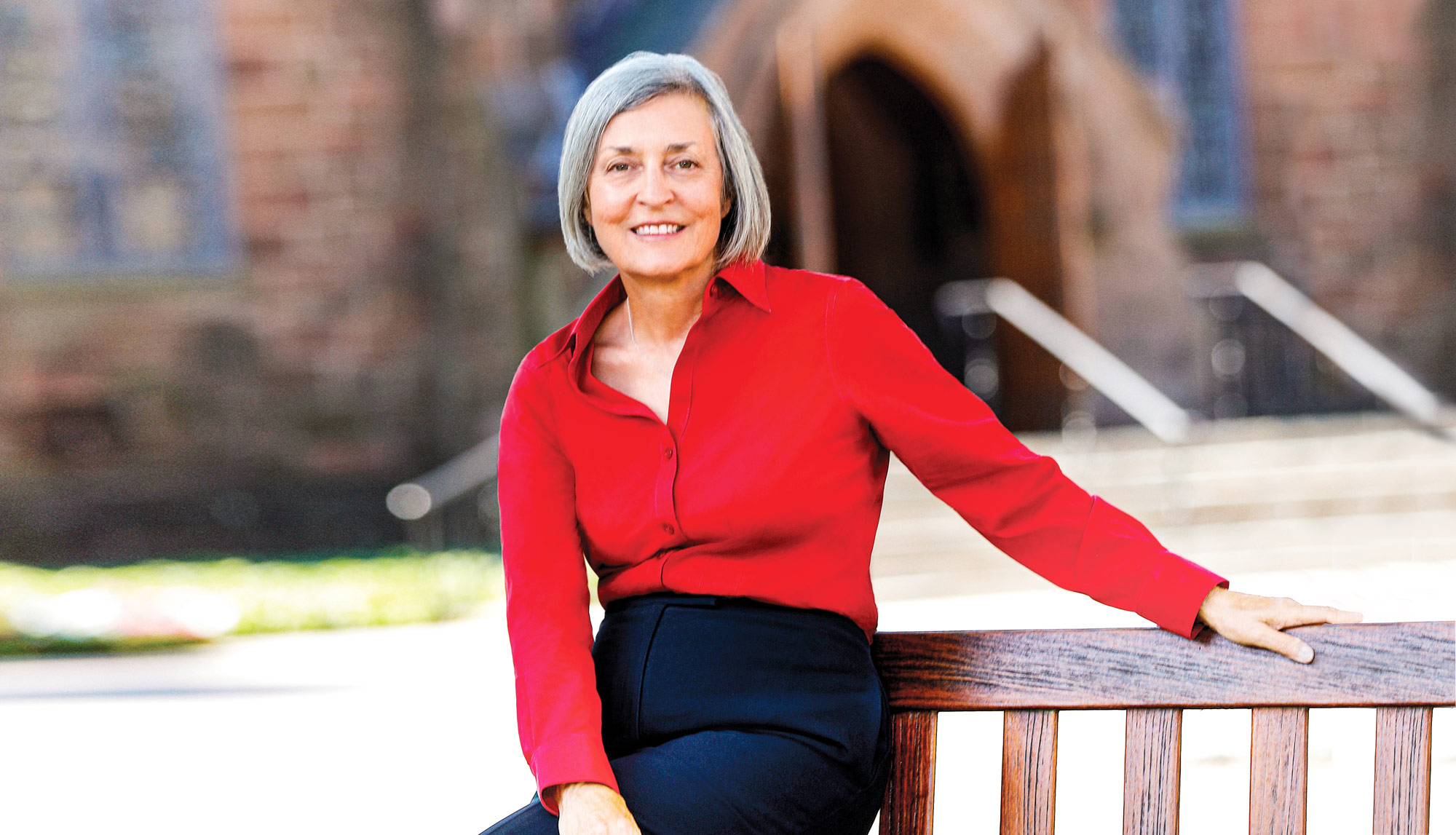 Fifty years ago, on a bright morning in early June, Elaine Lardieri stood on Seton Hall’s commencement stage and addressed the Class of 1969 and their families.

It was a landmark moment for her, of course, but also for the University at large: after 113 years in existence, the school had its first female valedictorian.

It’s been long enough now that she doesn’t remember exactly how she found out she’d landed the honor. Long enough that she can’t find a copy of her valedictory speech. But she can still remember looking into the front row and seeing her family beaming up at her, and her boyfriend Paul Edgcomb ’68/M.A.’71, still a few years away from becoming her husband, snapping away on his little Kodak Instamatic camera.

Elaine Edgcomb ’69 is certain that at some point in her speech, she quoted this passage from Edna St. Vincent Millay’s poem, “Renascence”:

“The world stands out on either side

No wider than the heart is wide;

Above the world is stretched the sky, —

No higher than the soul is high.”

In those lines, she wanted to tell her classmates that their success wouldn’t depend only on their knowledge, but also on “the content of our souls and how we opened ourselves up to others,” she says now.

That sunny June morning wasn’t the last time Edgcomb would burst through a door that had previously been locked to women, just as it wasn’t the last time she considered the “content of her soul” and prioritized helping others. Though no one in the audience knew it yet, the woman quoting “Renascence” to them would go on to blaze new trails everywhere she went — starting with high-level international work for Catholic Relief Services (CRS) and continuing into the earliest days of microfinance and microenterprise.

When Elaine Lardieri arrived on campus in the fall of 1965, there weren’t many students like her. “She was something very new to Seton Hall,” says her friend Bob Windrem ’68. “She was a woman on campus.”

At the start of her sophomore year, just 22 women were enrolled on the South Orange campus — scattered in among 2,655 men. (Those numbers changed significantly in early 1968, her junior year, when South Orange went fully co-ed after Seton Hall closed its satellite campuses in Newark and Jersey City.)

Born and raised in Newark, she lived so close to Seton Hall that she could easily walk to campus. Her father drove for the United Parcel Service and her mother worked in the Newark Public Library. Neither had gone to college, so it was a jubilant moment for the whole family when she enrolled in Seton Hall’s Humanities Honors Program (HHP) — one of the few programs open to women at that time — on a full scholarship. 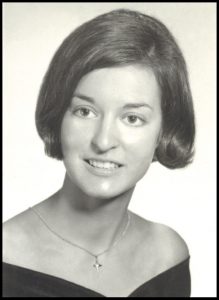 HHP students studied Western history and culture through interdisciplinary courses that wove literature, music, dance and other fine arts into the history of each time period. “It’s something she’s carried with her for her whole life,” her husband, Paul, says of the program’s approach. “If we go to an opera, she’s going to read the libretto and learn the history behind it. The same thing with a piece of art or a poem. She comes at it from all angles.”

Edgcomb also found herself drawn to Latin America. A double major in history and Spanish, she remembers taking a course on Latin American history that covered popular movements and “the continuing efforts by the poor to improve their lives,” she says. That course is what sparked everything that followed: graduate school, her years at CRS and, eventually, her work in microfinance.

Guatemala, 1976
In the middle of the night on Feb. 4, 1976, Elaine Edgcomb was shaken awake in Guatemala City. “I knew it was an earthquake the minute it started rumbling,” she says now.

As the rattling continued, all she could do was sit in bed, waiting for it to stop, wondering whether she would survive and thinking about her family back home in the United States.

When the jostling stopped, Edgcomb crawled out of bed and found the co-worker she was staying with. They spent the rest of that night in a car together — the safest place to go, they’d been told — as aftershocks rocked the country.

Later it would emerge that 23,000 people had died from that earthquake, more than a billion dollars of damage had occurred, and almost a sixth of Guatemala’s population had been left homeless. But she didn’t know any of that yet. She just knew that as an assistant regional director for Catholic Relief Services, it was her mission to help anyone who needed it the best she could.

In the days after the quake, Edgcomb and her co-workers quickly began to organize disaster relief, setting up flights into the country with food, clothing, medications and plastic tarps.

Founded in 1943 by the U.S. Conference of Catholic Bishops to assist World War II survivors in Europe, CRS had grown into a multi-continent source of humanitarian assistance, disaster aid and socioeconomic development programs by the time Edgcomb went to work there in 1971. She started out as a development assistant, fresh out of Georgetown University’s master’s program in Latin American studies, but soon she joined a new crop of CRS women who were choosing international fieldwork over domestic desk jobs.

By the time she left CRS in1981, Edgcomb was directing the agency’s development and relief programs across 13 countries in Central America and the Caribbean. She spent more than a quarter of each year traveling in those regions, working on an ever-evolving slate of projects that ranged from agricultural development to carving out leadership development opportunities.

“Underlying all of the work was the recognition that people were poor not because of defects of their character,” she says, “but because of structures and political systems that excluded them or extracted more value from them than they gave in return.”

All Over the World, 1985
The term microfinance was still a full decade away from appearing in print when, in 1985, Edgcomb helped found a network dedicated to its ideas.

She was intrigued by the new strategy of arranging small loans for people in developing countries who
had no credit or assets — and who often worked outside the formal sector in “microenterprises” like street vending or artisan craftsmanship — in order to help them grow their businesses and better support their families.

What began as a one-year exploratory project became the Small Enterprise Education and Promotion (SEEP) Network, a nonprofit that still exists today.

With Edgcomb at its helm, SEEP connected U.S.-based nonprofits that were all working in international microenterprise development and microfinance.

“We became the venue for people to share their experiences, identify best practices and develop tools that would help people all around the world,” she says. The network included just 25 organizations at first. Today it consists of several hundred nonprofits in 150 countries.

After 13 years running SEEP, Edgcomb turned her focus closer to home. In 1998, she joined The Aspen Institute and helped start FIELD — an initiative designed to test, evaluate and document innovative approaches to helping disadvantaged entrepreneurs escape poverty and create jobs.

She watched with amazement as the landscape expanded from a handful of U.S.-focused microenterprise programs when she started to well over 400.

“FIELD has in many ways been the leading source of knowledge-building and expertise for the U.S. microenterprise development field,” says Joyce Klein, who worked with Edgcomb on FIELD starting in 1998 and took over as its director in 2012. “That was very much because of Elaine’s leadership and the knowledge, expertise and commitment that she brought to that work and that role.”

Klein says she and her co-workers also admired Edgcomb for her integrity. “She had a very strong ethical and moral code that she was going to adhere to,” Klein says. “People respond to that in a leader.”

“She speaks her mind,” adds Paul. “That’s never bothered her in any situation. But there’s always discussion and respect for other people.”

But Edgcomb, who’s now enjoying retired life with Paul in Metuchen, New Jersey, suggests a second connection. “Throughout my career, what was important to me was how one achieved greater social and economic development and equity for people who had less than we had,” she says. (It’s a philosophy the Edgcomb children also absorbed. Lauren, J.D. ‘07 and David have both found ways to help those who are struggling: David as a Peace Corps volunteer in Panama; Lauren as a bankruptcy attorney who serves clients in economic and financial distress.)

Edgcomb says it all goes back to her faith — specifically, the Catholic social doctrine, which “influenced me greatly.” She notes that “the role of Christians is to seek justice and opportunity for those who have been excluded.”

Because of the time in which she was working, microfinance and microenterprise became her tools-of-choice to reach that goal. “And I think we made some progress and helped some people improve their lives,” Edgcomb says, “but clearly, there is so much more to do.”

“When you look back at your life, it almost seems like a movie that had to flow the way it did,” she adds, thinking back to her undergraduate days and that morning on the University commencement stage. “I am forever grateful that Seton Hall opened me up to a profound and consequential way of looking at, and being in, the world.”

Research assistance on this article was provided by Alan Delozier, university archivist.