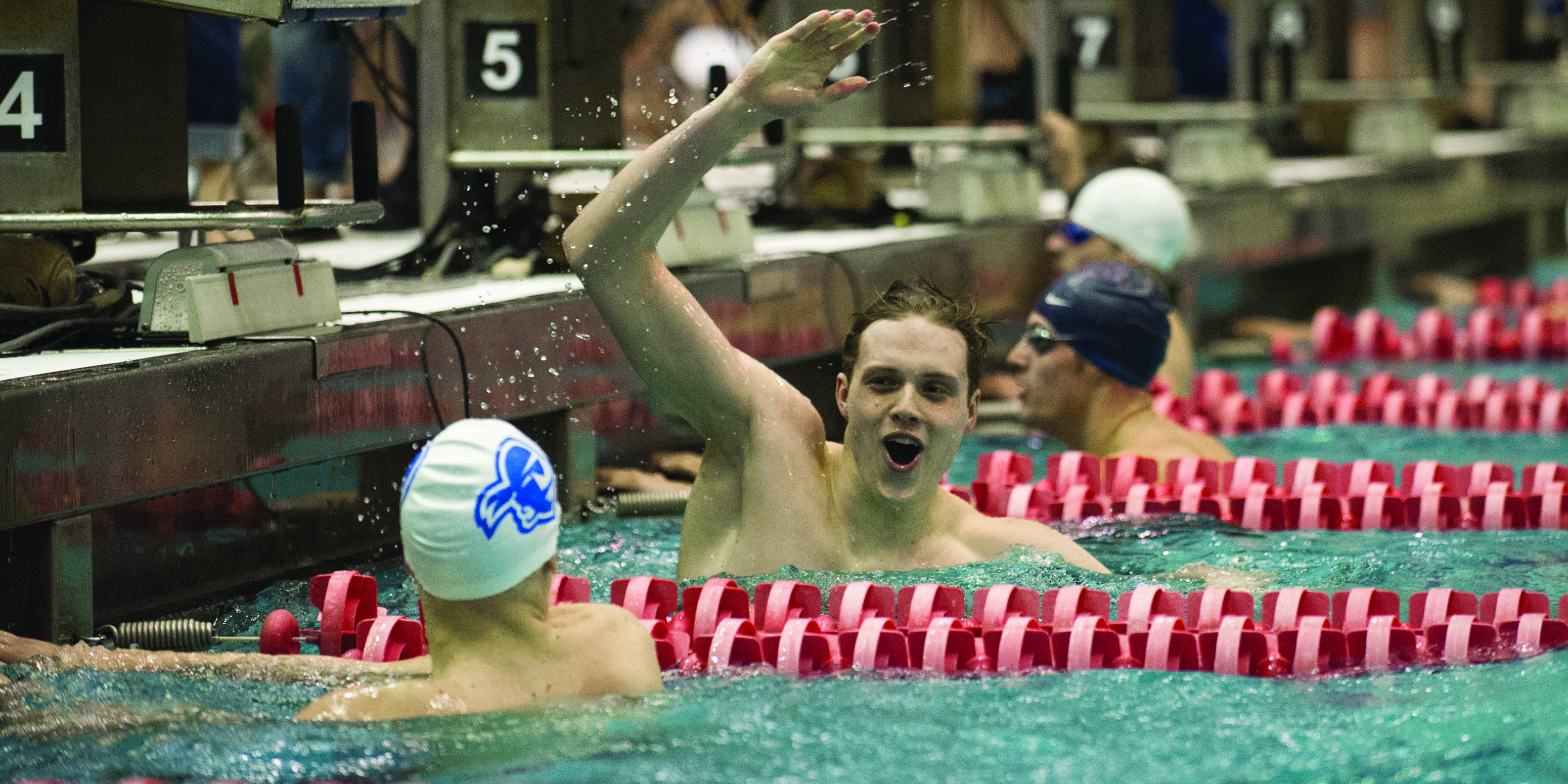 In The Fast Lane

Elite swimmers often display their skills at a young age, but Noah Yanchulis took a different lane on his way to stardom at Seton Hall. Swimming on an eighth-grade club team in Maryland, “Every single day, I didn’t want to do it,” he says. “It was bad. But I stuck it out. In ninth grade I really started to like it.” And he started to get really good at it.

Now — twice named BIG EAST Most Outstanding Male Swimmer — Yanchulis is a mainstay of the Pirates team, and has become a star in the water and a leader out of it.

It wasn’t until the end of his senior year in high school that his future came into focus. Yanchulis received little attention from college recruiters, but his club coach contacted Seton Hall and he visited campus. “Probably two or three weeks later, I committed,” he says. At one point in high school, Yanchulis wanted to go to a “school that had a football team,” but he eventually fell for the smaller Seton Hall campus and enjoys “that you pretty much know everyone.”

As a freshman, Yanchulis made sure BIG EAST competitors knew him. He came in first in the 200-yard freestyle at the BIG EAST Championships in 2015 and second in the 200 fly. Each year Yanchulis has gained speed in the pool and medals on the stand. In 2016 he won the 200 free and 500 free, and as a junior in 2017 he won both of those events again and added titles in the 400 free relay and the 800 free relay.

It’s an impressive haul for a late starter, especially one who didn’t have a lot of Division I schools seeking his talents. In addition to the smaller campus and proximity to New York, the chance to swim in college’s top division also attracted him to Seton Hall, and in three years he’s shown other schools what they missed out on. In highschool, he had seen friends back in Maryland getting attention from recruiters, and while he “wasn’t mad about not getting calls, it was definitely a big motivator. I knew I had something to prove.”

He’s done that, according to head coach Derek Sapp, who has watched Yanchulis’ three-year progression. Sapp remains especially impressed at the way Yanchulis battled through shoulder problems as a sophomore, and says the biggest factor in the swimmer’s success is his work ethic. “And he’s definitely more confident than he was three or four years ago,” Sapp says. “You could see that coming.”

As a captain for the Pirates, Yanchulis also drives his teammates — Seton Hall captured its first conference title in 2017. “You’re not doing it for yourself. It’s not a team sport but at the same time it is, because if someone has a good swim before me, I’m thinking, ‘OK, I have to top that.’”

Sapp says Yanchulis also inspires with his performance. The coach remembers at the 2016 BIG EAST Championships when Yanchulis won the 500 free “and a lot of people just fed off of that. You’re literally swimming the race by yourself, but people see that and it gets them all excited and ready to go.”

With one season remaining, Yanchulis — a double major in IT and marketing who would love a career in sports — has one big goal: to qualify for the NCAA championships, an event for the best of the best.

“It’s the most competitive event in the world,” he says. “It’s very intense, and it’s very tough to make, but that’s the goal. …  It’s going to be very hard, but there’s so much I can improve on.” And a trip to the NCAA championships would be the perfect ending to the career with the unusual beginning.