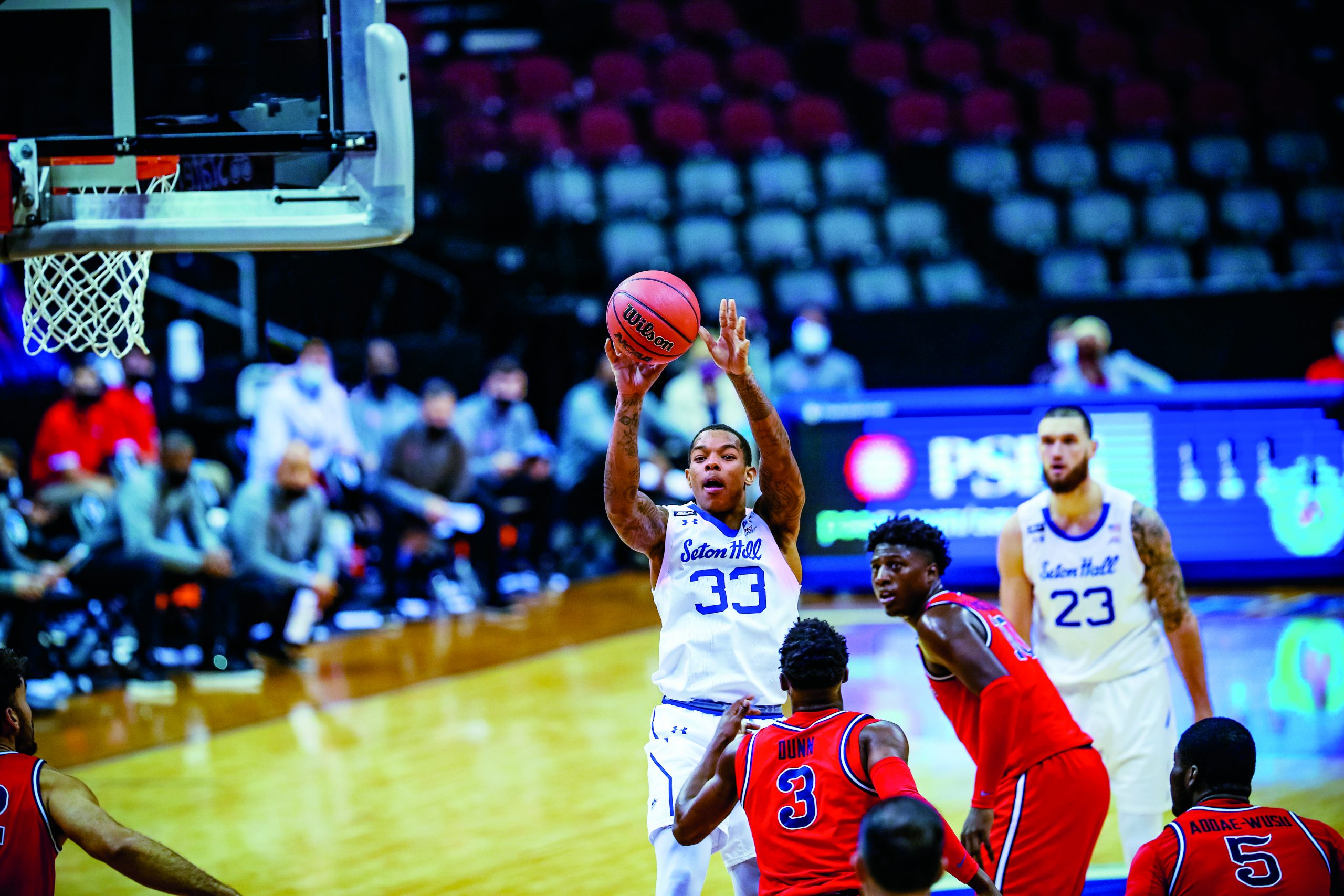 Advocate for Good, On and Off the Court

Shavar Reynolds Jr. was over 6,000 miles away from home when he had an experience that shaped his athletic future and the way he saw the world.

His family lived in Japan for three years when his father, Shavar Sr., a master-at-arms in the U.S. Navy, was stationed there, and it’s where he attended fifth through seventh grade.

“It changed my outlook on life,” recalls Reynolds Jr., now a Seton Hall point guard, “because it showed me no matter where you go, people are people. I always thought it would be a whole different world, but it’s really not. We’re all just people.”

That’s one reason he felt the need to speak out about social injustice on a podcast last year, in the wake of several racially charged incidents in the country.

The years in Japan “showed me we can live equally and peacefully but we have to want to. … I think that’s the big thing. … I’m always going to advocate for it and speak out because it’s possible.”

Reynolds’ time overseas also changed his athletic direction, which had been oriented around the gridiron. But only flag football was available on the base, while basketball courts were plentiful.

“The passion for football went away,” he says. “I started falling in love with basketball because I started playing it so much.”

He played it well enough to be a three-year starter and 1,000-point career scorer back home in New Jersey at Manchester Township High School. But that didn’t earn him any Division I scholarship offers.

So why didn’t he give up?

“Belief,” Reynolds says. “I just knew I could. Even if I wasn’t good enough [at first], I would work hard enough to be good enough.”

He attended Covenant College Prep in nearby Belmar, and his coach, Ian Turnbull, set up an open-gym workout at Seton Hall. Reynolds showed his stuff, playing with notable Seton Hall seniors such as Angel Delgado and Khadeen Carrington.

“They really liked the way he played,” coach Kevin Willard recalls. “It was really about those guys saying they wanted him to be on the team.”

Reynolds was a walk-on at first. But that changed when he and Willard spoke after his freshman season.

“I thought he’d be a really good role player,” Willard says, explaining his reasoning for granting Reynolds a scholarship. “You have to give him a tremendous amount of credit for his work ethic. He has an edge.”

“I went into this with the idea that I was going to earn a scholarship,” Reynolds says, “but it doesn’t compare to the actual moment that it happened.”

Thrust into a starting point guard role this past season, Reynolds was outstanding for the Pirates, finishing in the top-10 in the BIG EAST Conference in assists (4.2 per game), assist/turnover ratio (1.9) and steals (1.8 per game).

Willard “believed in me when nobody else wanted to,” Reynolds says. “Technically I shouldn’t be here. … I’m not going to let that opportunity slip nor am I going to let him fall for taking that leap of faith on me.”

Shavar’s father recently retired and now can be there physically for his son, even though he always was there in spirit. Equally instrumental in his upbringing has been his mother, Teekemia, a social worker.

Reynolds is about to graduate with a degree in social and behavioral sciences with a minor in criminal justice but isn’t ready to think about his future.

“I just try to live in the moment,” he says, although he wants to play basketball professionally if he can. “What I do know is I’m going to be the same guy that works hard and try to be the hardest worker in the room.”

As for his four years at Seton Hall, he says, “I’m just thankful for the culture here. … All of our fans, all of our donors, I love them. … I’m glad I was able to be surrounded by such good people. For the four years I’ve been here, I appreciate every bit of it and I’ll never forget it.”

J.P. Pelzman is a freelance writer who covered Seton Hall basketball for 14 seasons for The Record of Hackensack, N.J.