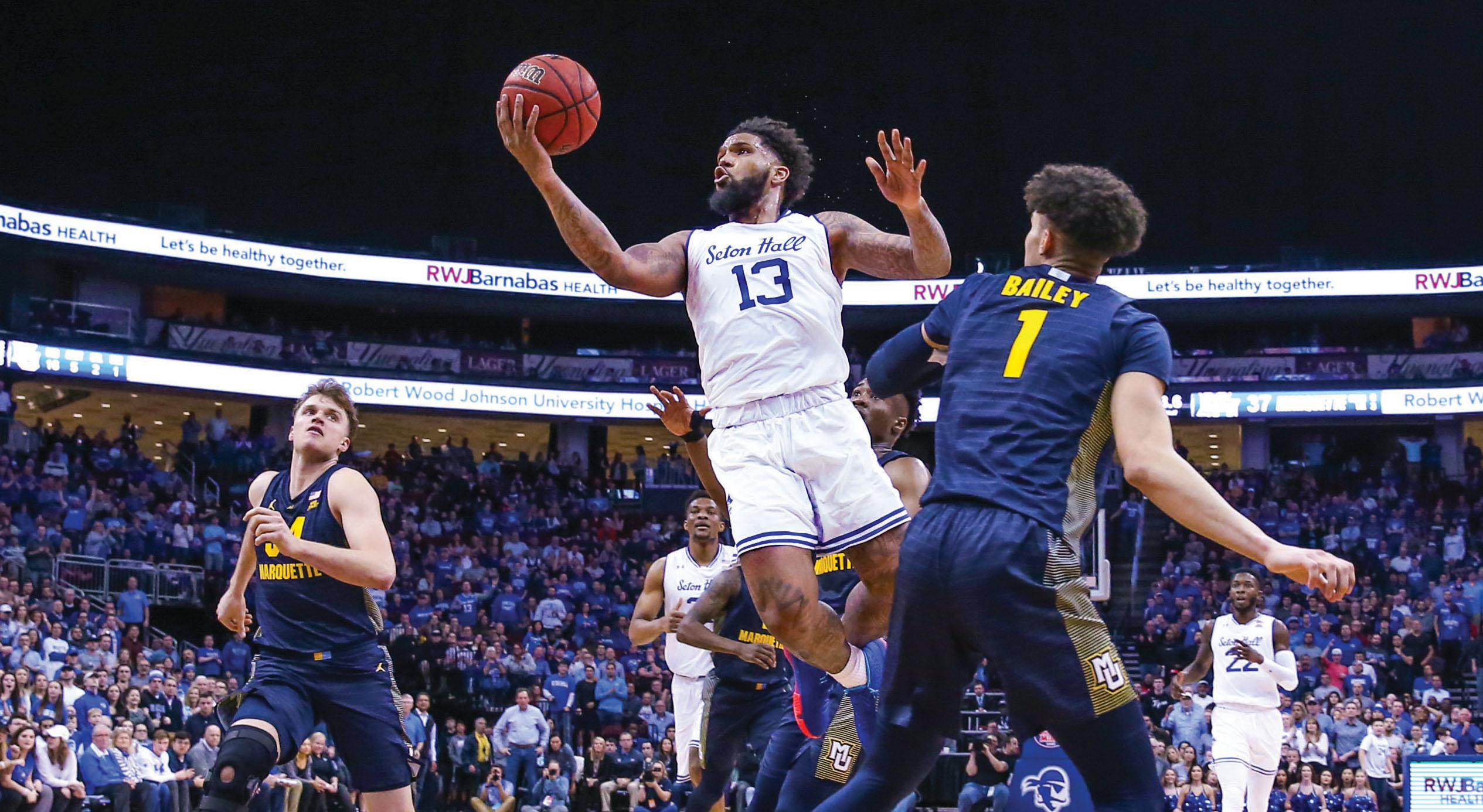 During his Seton Hall career, Myles Powell often has celebrated after making a big shot, grabbing the front of his jersey to show off the name of his school.

But in Powell’s case, maybe it means a bit more. You see, it wasn’t always a smooth ride from high school sophomore to first-team All-American (the program’s first since 1953) and BIG EAST Player of the Year. But through it all, the senior shooting guard and Seton Hall stayed together, which is why he says, “I’ll always put the Seton Hall family first and I want the Seton Hall family to remember that.”

Powell’s path to South Orange began in his hometown of Trenton, when he was contacted by then-Seton Hall assistant coach Shaheen Holloway. Powell also was contacted by Rutgers, Drexel and nearby Rider, but, he said, “Whatever [Seton Hall] saw in me, they saw it first. … Real recognizes real. When I felt that love coming from them, I knew it was real.”

But reality soon struck. In Powell’s sophomore season at Trenton Catholic, he fractured his foot. And when he broke it again during a post-grad year at South Kent School in Connecticut, “That’s when I got fat. And schools were saying, ‘Why is he getting so fat?’”

But Seton Hall never wavered, even when Powell arrived on campus in the summer of 2016 carrying 240 pounds and the nickname “Cheese,” because he liked to put the dairy product on everything.

“They knew what was going on,” Powell said of head coach Kevin Willard and his staff. “They took the time to get to know me as a person.” That motivated him to drop 45 pounds and “show them that whatever they saw in me, they saw the right thing.”

Powell averaged 10.7 points as a freshman and 15.5 as a sophomore on teams filled with upperclassmen. He had to defer not only on the court, but off it.

“I had so much love for them and just wanted to send them out the right way so bad,” he said of the upperclassmen. “I didn’t want to step on anybody’s toes.”

But once those seniors graduated, it was obvious who had to become the leader. And not merely on the stat sheet, although he averaged 23.1 points in 2018-19.

“Last year I wanted to lead by example,” Powell said. But that has changed in his senior year as team captain.

“I just had to find it in myself to get more comfortable in myself as a leader and come out and say certain things,” he says. “If I see guys going through things, I’ll pull them aside and talk to them even if it’s not about basketball.”

“I’ll go up to them [and] make sure everybody’s good,” he added. “I find myself going through the [residence] building, knocking on everybody’s door, seeing if everybody’s cool. … I just do my best to try to make everybody happy, even though it’s kind of impossible.

“I feel like God has a way of sending blessings and opportunities to those who live the right way.”
“Myles is a once-in-a-lifetime person,” said sophomore teammate Jared Rhoden. “He’s like no one I’ve ever seen before. His charisma is amazing.”

Powell credits his mother, Jeannette Moore, as his inspiration. “All my life I’ve seen my mom fight, fight, fight [and] never complain. I just want to make her happy.”

Making people happy is something Powell talks about often. More important, he lives it. At a preseason autograph session on the University Green, Powell made sure he and his teammates stayed until every fan in line had the opportunity to meet them. And after games at the Prudential Center, Powell regularly can be seen signing autographs for young fans.

Powell always tells people, “You don’t have to thank me. The smile that your son or your daughter just gave me, it lit my heart up.”

“No matter how many accolades I get, at the end of the day none of that stuff matters,” says Powell, who is working toward a degree in social and behavioral sciences. “I just hope that I can be the role model they can look up to.”

As for Trenton, he says, “I can’t wait to make a lot of money and hopefully one day go back and build a boys and girls center. I want to give back something to my city.”

Much the same way he has given so much to Seton Hall University.

J.P. Pelzman is a freelance writer who covered Seton Hall basketball for 14 seasons for The Record of Hackensack, N.J.

In The Fast Lane