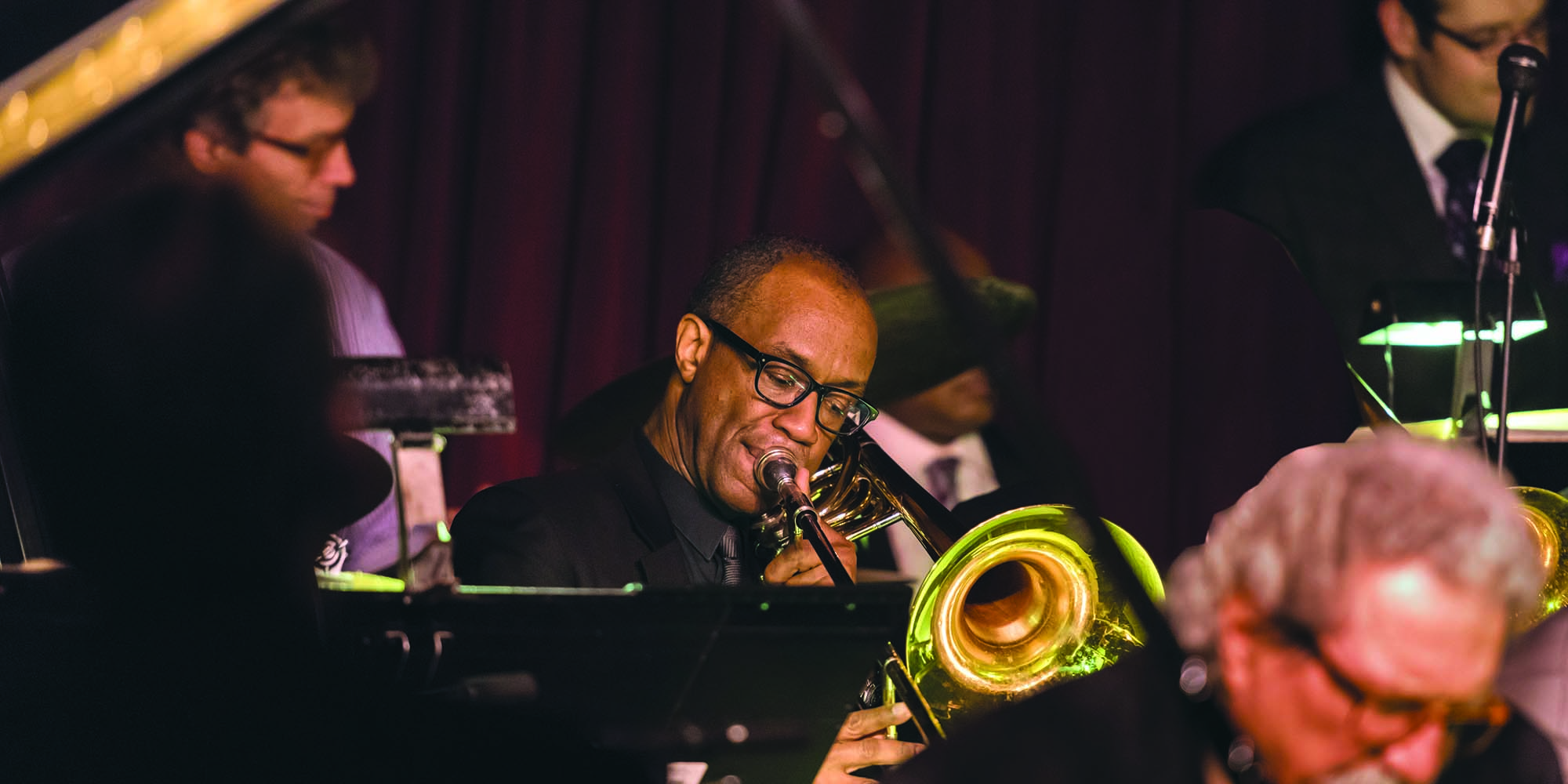 Douglas Purviance is on the phone from Tokyo. It’s 11:45 a.m. on a Thursday, New Jersey time, which means it’s 45 minutes past midnight on Friday, Japan time. Just a few hours earlier, Purviance finished the first concert in a 10-day tour of Japan with the Vanguard Jazz Orchestra, the exalted 16-piece ensemble in which he has played bass trombone since Jimmy Carter was president. But Purviance is wide awake, if severely jet-lagged. Or, as he puts it, “I’m like fried bananas.”

The Japan tour will take the band to Osaka and then to Hamamatsu, where they’ll perform at the Yamaha Jazz Festival. If the schedule sounds grueling, it’s hardly unusual. Purviance has earned his living as a New York-based musician for four decades, and has played on more than 40 studio recordings. He’s been a staple in Broadway pit bands, covering the entire 18-year run of “Cats” and now in his 14th year with “Wicked.” He’s performed alongside Dizzy Gillespie and Ron Carter, Stan Kenton and Slide Hampton, Mel Lewis and Thad Jones — some the greatest jazz players in the past 40 years.

Purviance is one of many working artists, performers and journalists who bring real-world experience to their teaching positions in the new College of Communication and the Arts. Founded in 2015, the college is organized around interdisciplinary centers of study and features professionals-in-residence who help students prepare for internships and full-time jobs in a rapidly changing marketplace.

Most Monday nights Purviance is at the Village Vanguard in Greenwich Village, managing and co-leading the band Lewis and Jones founded a half-century ago, as well as performing. “Of course,” he says, “the Vanguard Jazz Orchestra is my first love.”

In 2009, when “Monday Night Live at the Village Vanguard” received a Grammy for Best Large Jazz Ensemble Album, Purviance accepted the award on behalf of the band. Last February, during a musical tribute to Ray Charles at the White House, he performed before Barack and Michelle Obama. “I’ve done a lot of things,” he says, “but that’s got to be the top one.”

Purviance began his career in 1975, soon after graduating from Towson State College, when he embarked on an 18-month tour of “every square inch of the United States” with the Stan Kenton Orchestra. Since then he’s played on every continent except Antarctica, though it seems likely that if the penguins should extend an invitation, he’d jump at the chance. “I’m a working-class guy from Baltimore,” he says, “and this music has carried me all over the world.”

In 2005, the music carried Purviance to Seton Hall. Gregory Scime, an adjunct professor of music, was hoping to attract the Vanguard Jazz Orchestra to a new series of quarterly jazz concerts known as Jazz ’n the Hall. He enlisted Purviance, who was then living in South Orange, and the group headlined the premiere concert. Purviance became a crucial adviser to the series, Scime says, and in 2009 he joined the Seton Hall faculty as an adjunct professor.

“I always wanted to teach at a university,” Purviance says. “To see the spark in a young musician’s eye when I share my experience and it projects with them and they are able to get to the next level, it’s very exciting.”

Long after establishing himself in New York jazz circles, Purviance earned a master’s degree from the Manhattan School of Music. “Even though he is a major figure in the world of jazz,” Scime says, “he has a strong classical background.”

Seton Hall senior Daniel Garay, a diplomacy major from California, began studying with Purviance in September, and says the lessons use a personal approach. “He’s always reminding me to take big breaths. Don’t get caught up with mistakes. Try to be as good as possible,” Garay says. “Hearing words like that from someone as accomplished as Professor Purviance is really uplifting. He’s taught me to appreciate my own talents.”

At 64, Purviance remains a musician on the move. In late October 2016, two days after returning home from Japan, he traveled to Washington, D.C., to perform at the Kennedy Center with Herbie Hancock and others in a concert honoring the 90th birthday of the legendary tenor saxophonist Jimmy Heath.