Adventure on the High Seas

“Nobody can prepare you for when you’re out alone in a 50-foot swell with 18 people.”

It was somewhere between South Africa and Australia, in the middle of the Southern Ocean — where storms roared up from Antarctica and the swells rose 50 feet or more that Meg Reilly truly understood the meaning of “awesome” — an adjective she had tossed around so casually when she was a student at Seton Hall. 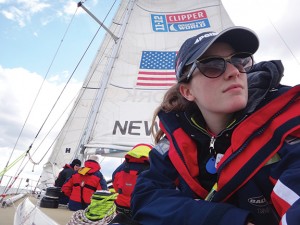 She was on the bow of a 70-foot clipper, on the third leg of an 11-month race around the world, changing a sail as the biggest waves she had yet seen were rolling in from behind. As she looked back she saw a looming wall of water dwarfing her crewmate at the helm. “It just made him look like an ant, and I’m just sitting up there for a moment smiling, like ‘This is awesome,’” she says.

“I compare it to why people watch scary movies and like roller coasters,” she says. “It scares you to life.”

Until a few months earlier, Reilly’s seafaring adventures had mostly been confined to the placid waters of Barnegat Bay, N.J., in her family’s 25-foot powerboat on summer vacations. After graduating in 2012 with a bachelor’s degree in business administration, she had landed exactly the job was aiming for, with Young & Rubicam, the giant marketing and communications company. But after four months she was restless enough to be moved to action by a story she spotted on CNN.

“My heart was pounding,” she says. The story was about the Clipper Round the World Yacht Race, almost a year at sea with other similarly restless souls, many of them sailing novices like her. “I’ve never had a reaction like that.”

She applied immediately, telling no one. “I just had a gut feeling that I had to do it and I didn’t want someone to tell me no,” she says.

Offered a spot, she then had to figure out how to afford it. She had saved some money and paid down her student loans by living at home and commuting to Manhattan, but the price tag was $67,000, and she did not hail from the kind of tony sailing haven where that might be regarded as pocket change.

She did, however, know enough about marketing from her studies and her job that she managed to find a sponsor, 4POINT4, a sports apparel company.

Next she had to learn how to sail. She trained for three weeks in England, where the Clipper Race was founded in 1995, and where the 12 boats in the most recent race launched from last summer. The open ocean left her feeling both exalted and nauseous.

“I saw my first shooting star and then I saw two more and I’m like, ‘Sold, you got me,’” she says. But she was seasick, too. “I was kind of mentally preparing myself to feel sick for a year. That was my new normal — I’m going to feel horrendous but I’m going to do it anyway because I’m a quite stubborn individual.”

The Clipper race is not a pampered, leisurely cruise among the tropical outposts favored by the yachting class. The crews were led by professional captains and worked around the clock while at sea: four hours on, four hours off, with no chance for a full-night’s sleep until they reached port, where their stays were usually just a few days. Their longest stretch at sea was 35 days, between Brisbane and Singapore. Most of the people who signed up for the race were “leggers,” aboard for just a stretch or two. Reilly was among the smaller group of “round-the-worlders.” When she returned to the boat after each port call, her seasickness would return, too, but it would fade after a few days back at sea.

Although she hadn’t cooked much before, she was assigned as the boat’s victualer, which occasioned a panicked call to her mother for recipes. Among those in the 25-page document her mother assembled was the one that became the crew’s favorite: pasta with artichoke hearts, sundried tomatoes, chicken and a lemony sauce.

“I don’t know if it had the chicken in there all the time,” says her mother, Paula Gunther-Reilly.
The crew named the dish Pasta Henri Lloyd, for the name of their boat, which was named after their sponsor, a British marine apparel company.

Her father traveled to England to see her off in September 2013, and left her with some advice from his own time at sea. A Navy veteran and a professional mariner who worked for many years for an oil-spill response company, he has most recently been rebuilding hurricane-damaged jetties on the Texas coast and has logged almost half a million ocean miles.

“The Clipper group does a good job preparing everybody for the race, but nobody can prepare you for when you’re out alone in a 50-foot swell with 18 people,” he says.

You also can’t prepare for the days when the wind dies and you barely move, or for the sweltering heat around the equator, or for when the rudder breaks or the water-maker stops working. Or for the dolphins and killer whales riding the waves alongside, or for the way each sunset and sunrise looks different from the one before.

Or for the transformation of an amateur sailor into a competitive racer.

“When I signed up, really, the racing part had nothing to do with it. I was there for me,” Reilly says. “But then I realized this is a team sport and it could never be just about an individual.”

And when the Henri Lloyd pulled into Jersey City in June, it was, to her great delight, in first place.

Meeting the boat at 11 at night were her parents, her three younger sisters and a host of aunts and uncles and cousins and neighbors, many of whom had been tracking the race map on their smartphones. 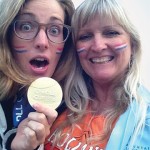 The Henri Lloyd was still in first place when it arrived in London in mid-July after 47,000 miles, leading the parade of clippers up the Thames and under the Tower Bridge.

“There’s so much time to think,” Reilly says. “I learned that the ideas of what I thought I should do with my life were not really my own but kind of a product of what society thinks is right and what success is and that just didn’t work for me and that’s why I was unhappy in what I thought was my dream job.”

She blogged from the boat, and plans now to write a book about her journey, as well as to give more talks of the kind she gave at several stops along the way, including at her alma mater, Scotch Plains-Fanwood High School, and the Scotch Plains elementary school where her mother is an art teacher. 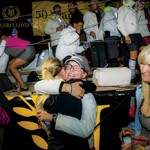 “I’ve learned that there are places where I think my mind, my body and my emotions have limits, but you can push beyond them,” she says. “There are so many things you learn about how to motivate people to do things toward a common goal when they are miserable and overworked and underslept, about how to you get a team together when everybody doesn’t want to do it.”

She also learned that, wherever she goes next, a boat should be nearby. “I made it almost a week and a half without aching to be on the water,” she says. So in the middle of her post-race trip around Europe, she took a boat out — just a small one — and sailed for a little while off the coast of France.

Kevin Coyne is a New Jersey writer who teaches at Columbia’s Graduate School of Journalism.