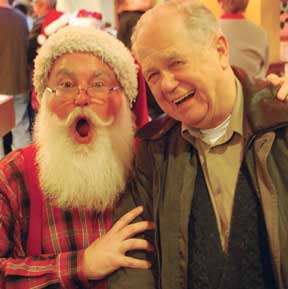 The Theatre-in-the-Round’s “Doc” era ended quietly on a Sunday afternoon at the end of October, when the final lines of Shakespeare’s “King Lear” were met with thunderous applause.

After the curtain call, Henry Lague ’09/M.A.’11 beckoned James P. “Doc” McGlone ’54 to the stage to join the students in a final bow. Lague presented the retiring director with a framed T shirt signed by the cast and thanked him for his dedication to Seton Hall.

Usually unflappable, McGlone — my father — was visibly moved by the moment and by the affection from his student cast.

“You are the theater,” he said, looking directly at them, seemingly unaware that the audience was standing and applauding in his honor.

“I told them, ‘all of you are a part of who I am,’ ” McGlone, 78, said later. “I love the place because of them.” For generations of Seton Hall graduates, the feeling is mutual.

My father’s love affair with Seton Hall began in 1950 when he enrolled as a freshman from Morris County. He returned as a faculty member in 1965, and since then has taught and directed thousands of students.

When he retires in May, he leaves behind a legion of fans. Some have achieved success as artists, but most have made their mark in other ways, in classrooms, courtrooms and newsrooms, in politics, churches and businesses across New Jersey and around the country.

“He’s a people shaper, in the best way possible,” says Jane Waterhouse ’74, a writer who lives in Fair Haven. “My life changed when I met (him). I’d never had a teacher who posed big questions, who expected me to think things through, expected an opinion. He valued it.”

Waterhouse says the best teachers can expect to influence 5 to 10 percent of their students. “But his figure is much higher,” she says. “If anybody was lucky enough to have wandered into his group discussion class, it would make them look at things differently. Something would come out of that.”

Doc McGlone is a bundle of contradictions dressed in a tie and cardigan sweater. He’s a conservative Catholic who can talk about Lil’ Kim and Lady Gaga, an old-school professor who never refers to himself as “Doctor McGlone.” (His nickname, Doc, evolved during rehearsals in the early ’70s as a middle ground between the too-familiar “Jim” and the too-formal “professor.”)

He has hundreds of friends on Facebook (where he signs comments with “the ol’ fella”) but doesn’t have a cellphone or use a bank card.

He plays up his old-fashioned persona, but he’s frequently ahead of the professional theater world. He produced “The Tempest” with a female Prospero years before Broadway decided it was a neat idea. He introduced American audiences to Irish actress Anna Manahan more than a decade before she earned a Tony Award for her work in New York.

No two of his classes are ever the same, but he ends every one with “It’s been a little bit of heaven right here on Earth, being here with you today.”

Students want their parents to meet him at graduation, where he happily poses for pictures. He’s been invited — and has attended — hundreds of weddings, baptisms and ordinations. He’s the one who slips quietly into the back at wakes and funerals.

Deirdre Yates, professor of communication and a colleague since 1992, says his influence is deep, and that he teaches more than students realize.

“He is teaching life, how life is viewed by playwrights, how he embraces life, how the world sees things. How to learn about life and how you fit in through great works of literature,” says Yates, whose younger daughter Emily, a freshman, made her Seton Hall debut playing Cordelia in “Lear.”

“He is so willing to share of himself,” Yates continues. “He’s opinionated, but you know, what a wonderful thing, to put yourself out there.”

Born in Boonton, N.J., in 1932, my father graduated from Seton Hall in 1954 and then attended Catholic University in Washington, D.C., where he earned a master’s degree. He was drafted into the Army, and after “two of the unhappiest years of my life” (as he always describes his service), he returned to the New York-New Jersey area. He enrolled in NYU’s doctoral program and began teaching at Manhattan College. He returned to Seton Hall in the fall of 1965, and earned his doctorate two years later.

His work in the Theatre-in-the-Round and in the classroom has always gone hand-in-hand. Some students auditioned for plays after taking one of his courses. Others enrolled in a class after working with him in the theater.

While he acknowledges the difference in students — and in the world — since he first began teaching, he says his work is remarkably unchanged. “It’s my job to talk to students,” he says. “A college education is a conversation. I show them I’m interested. I ask a lot of questions.

“I like the discovery. It’s like watching a light go on,” he continues. “I don’t think there’s any other time in growing that you’ll see such a dramatic change. They are less prejudiced. They take criticism well, especially if you let them see you like them.”

Stephen Smith ’92 is one of many former students who credit Doc with influencing their lives. Smith “maxed out” at five McGlone classes and performed in many student productions as well as in plays produced by the nonprofit Celtic Theatre Company McGlone started.

“That connection with (him), that was everything,” says Smith, an executive recruiter living in Orlando. “You take him out of that equation and my life is radically different.”

Smith says Doc was always teaching — whether they were walking across campus, driving to see an actor in a non-university performance, or talking after rehearsal. “It was, ‘I’m not going to tell you what to think. I’m going to teach you how to think,’ ” Smith says of the McGlone philosophy. “I learned to use my mind muscles.”

Mark Roger ’82 says it’s hard to imagine the theater without Doc. “He has been the heart and soul of that place and so near and dear to my heart that on some level I thought he would always be there,” Roger says.

“He has been the heart and soul of that place and so near and dear to my heart that on some level I thought he would always be there,” Roger says.

Many of Doc’s former actors recall his old-school directing style: “He’s an X’s and O’s guy, a ‘know your lines and don’t bump into the furniture’ type,” says Rich McNanna ’00, while others remember his boundless energy. Many note that he was dedicated not only to the shows, but to the community of artists working together to put them on.

“He loves the camaraderie, loves the company of people,” says Smith. “As much as he loves the productions, I think he loves the ham sandwich and glass of red wine at Cryan’s afterwards just as much.”

My father has worked with many talented artists, many of whom have had successful acting careers. And while he has had his pet peeves (“I could drive a train through that cue”), he has always been concerned with more than what’s happening on stage.

The theater teaches discipline and commitment, he says. “You learn to rely on others, and you learn that things end,” he says. “And the ritual of the whole thing. And that opening night comes — ready or not.”