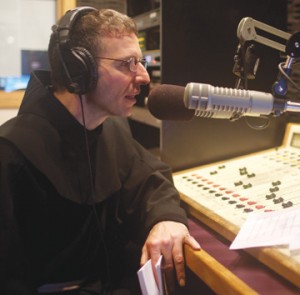 Greg Cellini ’85 has finally found his voice. Five years ago, the Clifton native relinquished a 29-year corporate career to become a Franciscan friar, a ministry that includes the “Thank God for Monday” show on WSOU FM every Saturday at 8:30 a.m.

In his black habit, Brother Gregory, 51, cuts a distinctive figure at Seton Hall University’s radio station, where he broadcasts the half-hour show and spends time talking with students before heading to visit with his 92-year-old mother, Lucia, and other members of his family.

Segment with Diane Hamilton. This interview aired on March 26, 2011.

Although he had notions of becoming a broadcaster early on, Cellini thought he had outgrown the idea in high school, when he began working at the Hoffmann-La Roche pharmaceutical and research plant in Nutley.

But the friary gave Cellini a new perspective. A big fan of talk radio, he wondered why there were shows for sports, politics and emotional problems but none for “some perspective on the workplace.”

Segment with Martin O’Neill. This interview aired on April 16th, 2011.

“We try to bring hope and healing to the people who are damaged and angry and bitter and unemployed and underemployed,” Cellini said, describing his show as “not religious, but where guests are free to talk about the spiritual.”

Mark Maben, general manager of WSOU, said the concept fits well with Seton Hall’s mission as a Catholic university. With high unemployment and the stress downsizing has brought to the workplace, plus fears undergraduates might have about entering the job force, Maben said there was an obvious need for the kind of talk show Cellini launched in 2006.

And the Franciscan’s life experience makes him the ideal host, Maben said. “Greg is someone who clearly always was a person of faith, worked very hard to get through Seton Hall, had this career in a large corporation, and now adds this dimension of the spiritual journey he had to take to become a Franciscan.”

As a youth, one of Cellini’s models was sportscaster Marv Albert. But a livelihood in the corporate world seemed a more realistic future, just as it was for his late father, Ceasar, who worked for 45 years at the former Chase Manhattan Bank in New York.

To Cellini, no employer offered more stability than Hoffmann-La Roche. As a high school senior, Cellini worked part-time at the sprawling complex along Route 3. Lured by a full-time job, which included tuition as a fringe benefit, the part-time job became full-time on the Monday after his graduation from Paul VI High School in June 1977. Three months later, he began eight years of night classes at Seton Hall, where he earned an accounting degree in 1985, followed in 1994 by an M.B.A. in management from Rutgers University.

All the while he attended Mass and was involved with his parish church. Yet, as promotions came at work, he was growing increasingly unsettled, and he knew another job was not the answer.

He compared this time in his life to the beginning of the conversion of Saint Francis of Assisi. “What once was sweet became sour,” he said. “I was finding my volunteering in the church was giving me more satisfaction than my job.”

When his parish gave him an award for service in 2005, he knew he had reached a crossroads. Before the tabernacle he recalls praying, “‘I’ve screwed this up enough, you take it over.’ It was a moment of surrender.”

At Roche, he availed himself of employee counseling. Following a diagnostic test, his coach told him his profile fit more with religious than corporate life. It had never occurred to him before and he was overcome by a sense of purpose and peace. In October 2005, while researching religious communities, he found the Franciscan Brothers of Brooklyn, N.Y. The ministries of the 150-year-old community include schools, parishes, hospitals, soup kitchens and prisons and Cellini entered its formation program in September 2006, four months after he left Roche.

Brother Richard Contino, Cellini’s mentor, said transitions from careers to religious life are hardly exceptional these days. “We come in already molded to a great degree and religious life begins that softening of some of our hard edges,” said Contino, who became a Franciscan in his 40s.

In addition to the WSOU show, Cellini works in the career center at Saint Francis College in Brooklyn Heights. He also works in his order’s finance office.

“I thought I’d make it to 50, retire and do consulting, or work part-time,” Cellini said. “But this is where it’s at. I believe this is the life God wants me to live.”

“He has really found his calling since becoming a brother,” Maben said. “He, without a doubt, is someone special.”

Podcast versions of the two audio excerpts are here: