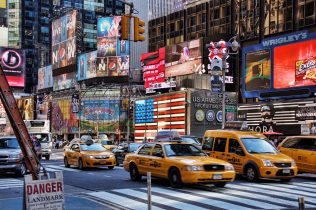 People walk like darts, each on a mission to get to their next destination.  You look up and notice the buildings looming over the street, self-aggrandizing like gods, looking for people to worship them. Some do, they look up, their backs arching, chests pointing towards the sky as they stare in reverence at the massive structures and their brightly lit signs.  These acts of worship are dispersed throughout the streets, clogging them in a glorified haze.  Carts holding arrays of different kinds of food pass by in a blur, they bombard your nose as you begin to walk down Broadway. 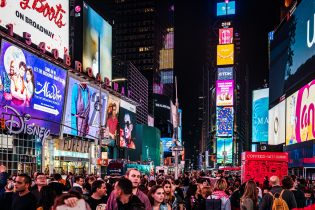 The walk down Broadway started as a Promenade.  The rich and famous of the late eighteenth century would dress in their finest clothes and set out onto Broadway to flaunt their status and class.  For the most part, the walk was cordial, people greeted each other and enjoyed the company of friends and family as they strolled about, however, in later years, race and gender issues started to arise.  Those taking part in the promenade started debating about who they would allow to walk with them.  White families did not want black families sharing the sidewalks and debates quickly ensued.  These families also argued about whether women without partners should be allowed to participate since the consensus was that a woman without a husband or beau was surely a prostitute.  The walk down Broadway quickly became about class: it was a parade where the wealthiest men in the city showed everyone else what they owned. 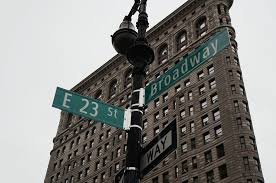 The Walk as a Trope in Literature:

The walk up and down Broadway is a trope found within early American literature.  Broadway has always been a spectacle and taking a walk down it was not something that everyone around the world could do. Word-of-mouth and storytelling used to be the main ways information spread, therefore, writers worked hard to capture the magnificence of Broadway in their work.  These stories, poems, and songs normally follow the individual as they describe what they observe during their walk.  A brief list of people who wrote about walking down Broadway follows:

A Video Tour of Broadway: