Edith Wharton was an American author best known for her stories and novels about the upper-class society to which she was born. She was the first woman to win the Pulitzer Prize for Literature in 1921 and was inducted into the National Women’s Hall of Fame in 1996. Many of Wharton’s novels are characterized by a subtle use of dramatic irony. Having grown up in upper-class, late-nineteenth-century society, Wharton  became one of its most astute critics (Britannica “Edith Wharton).

Her major works include The House of Mirth, The Age of Innocence for which  she won the Pulitzer Prize, Ethan Frome, and numerous collections of short stories including her autobiography A Backward Glance which appeared in 1934. Despite not publishing her first novel until she was forty years-old, Wharton was an amazing writer and produced in total fifteen novels, seven novellas, and eighty-five short stories . On top of that, she wrote books on design, travel, literary and cultural criticism, and a memoir. 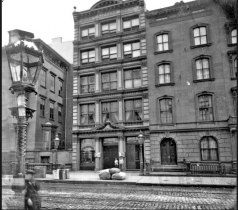 The above is a picture of Edith Wharton’s home on West Twenty-third Street. Wharton came from a distinguished and prominent New York family. She was educated by private tutors in her home. They belonged to that tiny but powerful New York clan who clung together, intermarried, set the tone and made the rules for society in Manhattan. I think it is important to take a look into how Wharton sees NYC, “New York is very slender — it stretches from Third Avenue to Sixth, essentially — and its center is what is now the campus of New York University… ‘One of the most depressing impressions of my childhood is my recollection of the intolerable ugliness of New York'” (“Edith Wharton”).

American children’s books that contained slang words were forbidden in Wharton’s home. Wharton’s mother forbid her from reading many novels and Wharton said she “read everything else but novels until the day of my marriage.” [70] Instead, Wharton read the classics, philosophy, and history. Her influences included Darwin and Herbert Spencer, which contributed to her ethnographic style of novelization.

Wharton’s paternal family, the Joneses, were a very prominent and wealthy family from which the saying “keeping up with the Joneses” derives. (She was born Edith Newbold Jones).

A Backward Glance: The Background

This analysis provides a deeper look at Wharton’s “A Backward Glance: The Background. Wharton describes herself as “but merely a soft anonymous morsel of humanity,” and essentially feels she lived a life of insignificance until she remembered a day she was “wakened to conscious life by the two tremendous forces of love and vanity” (582). Wharton goes into great detail when she is walking down the streets of the City with her Father and how she was just a small child and the most she could see were signs and up to the knees of strangers until she and her father came to a halt to talk to her father’s cousins little boy, Daniel. The encounter was described as an exchanging of interesting looks between them until the boy lifted her bonnet and gave her a kiss on the cheek, “it was the first time—and the little girl found it very pleasant” (582). There is something to be said for the fact that Wharton felt invisible and “unconscious” until she received attention from the opposite sex. While they were young and the situation is cute—the shadows and sunlight paradigm is evident here that these two female writers were certainly a part of the former. In fact, both female writers mentioned some type of plight faced when trying to start a career. “My little-girl life, monotonous…which according to Goethe, it is impossible to write poetry” (584). Here, Wharton was told that her life was too uneventful to write poetry but clearly the opposite happened.