Allen Ginsberg, born June 3, 1926 in Newark, New Jersey, was one of the most prominent figures in the “Beat Generation” artistic movement (along with others such as Jack Kerouac and William S. Burroughs). Ginsberg’s childhood was clearly influential on his later life, as his father Louis was an English teacher and his mother Naomi was a radical communist who suffered from epilepsy and paranoid delusions. During Ginsberg’s high school years, Naomi was committed to a mental hospital and would remain there for the rest of her life, eventually dying after a lobotomy fifteen years later. Much of this story is detailed in his poem Kaddish.

After receiving a scholarship, Ginsberg began attending Columbia University, and it was here that put him in contact with the other poet’s of the Beat Generation, so called due to what Kerouac described as “their shared sense of spiritual exhaustion and diffuse feelings of rebellion against what they experienced as the general conformity, hypocrisy, and materialism of the larger society around them caught up in the unprecedented prosperity of postwar America.” (Charters 5). It was also during this time at Columbia that Ginsberg began experimenting with drugs, and during his senior year he claims to have had a vision of William Blake reading Ah, Sunflower to him, which Ginsberg credits as the inspiration to his writing poetry.

In 1949, as a senior at Columbia, Ginsberg was arrested due to connections with a lover who at the time was also working as a car thief. As an alternative to prison, some of his Columbia professors intervened at the trial which allowed him to circumvent jail if he agreed to be hospitalized for his mental health. Ginsberg would spend eight months in Columbia Presbyterian Psychiatric Institute, another incredibly influential period in his life.

Ginsberg left NYC in 1953, to go to San Francisco on a long, winding, drug fueled road trip through the country. In 1955, it would appear that Ginsberg began to settle down, taking a job as a market analyst. However, it was during this time that he also began writing Howl, and after a thunderous performance of the first part of that poem in October of 1955 Ginsberg was rocketed to instant acclaim, with some calming that this reading g was the start of the poetic movement in San Francisco. Howl was also the subject of a long and protracted obscenity trial due to the explicit sexual nature of parts of the poem, the result of which being rocketing Ginsberg to national attention and making his works widely read.

After the publication of Howl, Ginsberg would live off the royalties of that poem for a number of years, traveling and living in Paris, South America, and India at various points throughout the late 1950’s and early 1960’s. During this time, Ginsberg would write, experiment with new drugs, and assist other beat poet’s in their own works and writings (such as Burroughs and his novel Naked Lunch). During his time in India, Ginsberg also became a Buddhist, which lead to him moving away from drugs and towards meditation on the path to enlightenment.

Returning to the U.S. in the late 1960’s, Ginsberg became a prominent spokesperson and prototypical image for the younger hippie generation, due to Ginsberg’s open homosexuality and protests of the Vietnam War. Eventually, Ginsberg would return to New York in 1973, becoming a tenured professor at Brooklyn college. he would continue to teach and publish from the city until his death from liver failure and other complications at age 70. 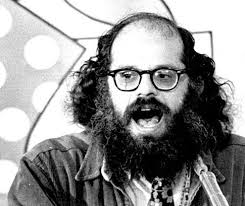 In Mugging, Ginsberg shows off much of what made him so widely admired as a poet while also employing many of the same techniques and methods used by other NYC writers of the past in order to more thoroughly convey his meanings and ideas.

The first thing Ginsberg is sure to show us in Mugging is the terrible conditions with which the lower class is forced to live in the city. While Ginsberg was personally wealthy, living his life as a buddhist meant casting away many of the earthly comforts money can buy, and for most of his time in NYC Ginsberg chose to live in a Lower East side tenement. The “Splattered Pavement” (Ginsberg 8) and overturned trash invokes some of the best images present in Riis’ work documenting the poor in NYC, and Ginsberg highlights that in the hundred years in between these two works being published not a lot has changed for these people.

There are also things in this poem that are distinctly Ginsberg, such as the diversions he takes in the poem in order to ruminate on the possibility that the FBI is watching him. These elements add a modern dimension to the poem when compared to the older pieces that also focused on the poor in NYC, but it is a modernization that feels incredibly specific to Ginsberg’s paranoid self. There is also the irony with which Ginsberg notes that, after being mugged, the mugger chose to leave the bag containing “$10,000” worth of poetry in Ginsberg’s estimation.

Ultimately, Mugging is successful at both accurately portraying the kind of conditions that are being lived in during this period in NYC; conditions that would push someone into actually committing a mugging, and Ginsberg is sure to give the people living in these conditions a degree of humanity, as shown through the second part of the poem where the people outside Ginsberg’s apartment tell him they can’t possibly help him find the muggers due to the cops profiling them and fear of retaliation from the robbers.