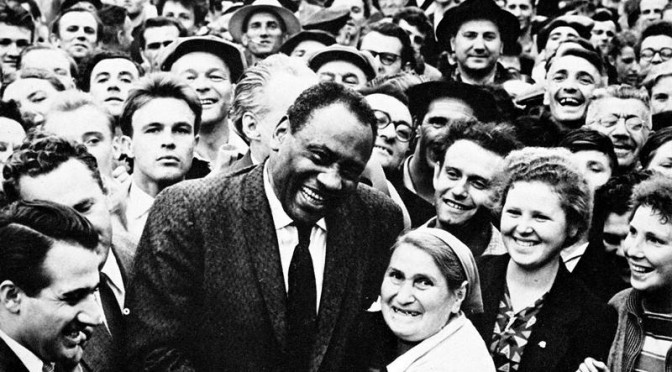 Paul Robeson thought his good friend, the poet Itzik Feffer, looked jittery when he expressed his inability to communicate freely through hand gestures. The hotel room, he indicated, was bugged. How was he doing? “Fine,” shrugged Feffer and slowly drew his hand across the throat. The encounter took place in June 1949, during Robeson’s triumphant post-war trip to Moscow, where on occasion of Alexander Pushkin’s 150th anniversary he once again performed for his favorite and, according to him, the most responsive audience in the world – that consisting of the citizens of a country he sometimes considered his “second motherland,” the Union of Soviet Socialist Republics.[1] Itzik Feffer had been part of the group of prominent Jewish Soviet intellectuals and artists (theater director Solomon Mikhoels and auteur Sergei Eisenstein among them) whom Paul Robeson had befriended before and during the war years and to whom he felt connected by an almost “mystical bond.” In 1949, Soviet Jews increasingly found themselves on the receiving end of a state-instigated vicious anti-Semitic campaign that would span the last years of Stalin’s rule and claim numerous victims, including Mikhoels and Feffer. Apparently Feffer was brought for the rendezvous with Robeson upon the latter’s request. The meeting was awkward, cognizant of the bugging devices the two exchanged pleasantries, then shook hands and parted their ways. Robeson hurried to the concert to delight his beloved Muscovites, Feffer was taken straight back to the prison cell to await his imminent execution.[2] That night Robeson obliquely acknowledged the plight of Soviet Jews by performing a Yiddish song before the emotional and stunned Moscow audience. But he never publicly spoke of his perished friends again, never responded to the revelations of Stalin’s crimes, never allowed himself to criticize the regime that, according to his deepest conviction, safeguarded the interests of the downtrodden, especially his “own people”:

I have heard some honest and sincere people say to me, “Yes, Paul, we agree with you on everything you say about Jim Crow and persecution. We’re with you one hundred percent on those things. But what has Russia ever done for us Negroes?” And in answering this question I feel that I go beyond my own personal feelings and put my finger on the very crux of what the Soviet Union means to me—a Negro and an American. For the answer is very simple and very clear: “Russia,” I say, “the Soviet Union’s very existence, its example before the world of abolishing all discrimination based on color or nationality, its fight in every arena of world conflict for genuine democracy and for peace, this has given us Negroes the chance of achieving our complete liberation within our own time, within this generation.”[3]

This was most certainly personal. Paul Robeson first arrived in the Soviet Union in late 1934 via Berlin and, the record Moscow freeze notwithstanding, fell in love with the land and its people. By all accounts, including his own, he received an exceptionally warm reception, which stood in grotesque contrast to the harrowing experience of his layover in the rapidly nazifying Berlin. During that first visit the Robesons stayed at the famed Hotel National, in the suite that a year earlier had been used as the living quarters of America’s first ambassador in Moscow, William Bullitt. Robeson was familiar with the experiences of other African Americans who visited or resided in the Soviet Union during this era and whose experiences on such trips were almost universally and overwhelmingly positive. Poets Claude McKay and Langston Hughes, radicals George Padmore, Harry Haywood, Otto Huiswoud, and William Patterson, the great pan-Africanist W.E.B. DuBois, and even Robeson’s own brother-in-laws John and Frank – all sang praises for the Soviets’ determination to practice and enforce the colorblind internationalism professed by Lenin and his heirs. For black visitors (and due to his celebrity, for Robeson probably more than others) arrival in the Soviet Union was invariably accompanied by dizzying opportunities for social, economic, and in many cases even romantic fulfillment. A Jamaican-born toolmaker from Detroit Robert Robinson arrived in the Soviet Union at the height of the Great Depression and quickly found recognition as a respected and well-paid engineer and eventually member of the Moscow City Council. A twenty-something unemployed journalism major from Minneapolis Homer Smith (penname Chatwood Hall) came to occupy an important managerial position at the Moscow Post Office and gain some repute as a prolific and Soviet-friendly journalist writing for numerous African American publications back home. Black American leftists played prominent role in the Communist International (Comintern) and hobnobbed with the brightest stars of Soviet political firmament. A group of black agricultural experts trekked to Soviet Uzbekistan in 1931 and some of its member would go on to have illustrious research and managerial carriers in the Soviet Union. Invariably, in their letters home and memoirs, in their official testimonies, these sojourners spoke of a “dream come true,” of finding in Soviet Russia the veritable racial utopia that remained a distant and elusive promise in Jim Crow America.

If a humble Detroit factory worker or an unknown young journalist were accorded the VIP treatment upon their arrival in the Soviet Union, one can imagine the sort of reception reserved for an international celebrity of Robeson’s stature. And Paul Robeson apparently relished the veneration and not just for his own sake but for the sake of the millions of his black compatriots who were routinely denied equality and respect back in the “land of the free” and whom he sought to represent in the “land of the Bolsheviks.” Robeson’s vision, it seems, was as laser-sharp as it was narrowly focused: as far as he was concerned the Soviet Union’s main attraction lay in its revolutionary minority policies and the sustained attempts to eliminate the vestiges of racial prejudice and inequality. Hence his keen interest in the emancipation of the former Russian empire’s Jewish and Central Asian populations. He enjoyed his trip as a fêted artist and an intellectual but also as a black man treated with respect and even deference: “Here I am not a Negro but a human being. Before I came I could hardly believe that such a thing could be… Here, for the first time in my life, I walk in full human dignity.”[4] As far as Paul Robeson was concerned the Soviet Union lived up to its egalitarian promise, to such an extent, in fact, that he did not hesitate to place his own son, Pauli, Jr., in a Soviet school.

Paul Robeson was relatively late to discover this ostensibly colorblind Shangri-La. Ironically, as his infatuation with the Soviet Union took root and deepened, other prominent African American intellectuals and leaders began to question the sincerity of Soviet ideological commitments. Throughout the late-1920s and early-1930s the Soviet Union went through a dramatic period of back-breaking (and, unbeknownst to some of its erstwhile champions in the West, horrifyingly bloody) transformations. From a backward agricultural society engaged in an unprecedented social experiment it evolved into an industrializing power, which was increasingly acting on the international arena less like the revolutionary utopia of its early years and more like a nation-state. Paul Robeson the artist was not particularly well attuned to the nuance of this transition, which was not lost on more astute and politically savvy observers — people like George Padmore or W.E.B. DuBois, who towards the end of the 1930s grew alarmed with the Soviet metamorphosis. The Great Terror that convulsed the Soviet society before the Second World War and claimed the lives of hundreds of thousands of its citizens made an impression on the small number of black Americans remaining in the country at the time (at least one of them, a flamboyant communist Lovett Fort-Whiteman, would perish in the Soviet Gulag). Many others were turned off by the Soviet decision to trade with Mussolini’s Italy just as it was invading Ethiopia and, in 1939, to conclude a non-aggression pact with Nazi Germany and partition Poland – a cynical foreign policy about-face that a stinging editorial in the NAACP publication The Crisis called the “great betrayal.”[5] The era of a black-red romance was apparently drawing to an end. But not so for Paul Robeson.

Neither the Soviet Union’s collusion with Hitler nor its subsequent assaults on Poland and Finland and the annexation of the independent Baltic states shook Robeson’s “special bond” with Soviet Russia. It is probably not a coincidence that his popularity in the United States reached its height during the war years, when his affection for Russia presented no impediment to his career advancement – the Soviet Union was America’s ally. The situation would change most dramatically with the rise of the Cold War and the spread of the Red Scare and McCarthyism in the United States. Paul Robeson’s trip to the Soviet Union in 1949 came in the midst of his growing isolation and mounting professional difficulties at home, where he was increasingly finding himself at odds with the prevailing mood of anti-Communism. It was against this backdrop that one must consider his tragic encounter with the condemned poet Feffer and his refusal to publicly reveal the doubts that he undoubtedly harbored. Over the years Paul Robeson would be regularly called to task for this moral equivocation, which likely had as its sources both his frustration with what he saw as an irredeemably perverse state of race relations in the United States and an obsessive fear (probably stoked by some of his communist friends) of Western democracies spawning fascism.[6] Indeed, upon his return to the United States, Robeson found himself the focus of an intense shaming campaign for his alleged call on African Americans not to fight against the Soviet Union. In August 1949, his concert in Peekskill, NY, became the site of a bloody riot and a few months later the State Department cancelled Robeson’s passport, effectively preventing him from traveling overseas. Subsequently his career suffered irrevocable damage, while the paranoid excesses of the Red witch-hunt served to confirm his worst apprehensions – the land of the brave was going to hell in a handbasket. Isolated, alienated, disparaged for his alleged lack of patriotism, handicapped in his ability to make a living, Robeson never quite recovered from the humiliations of this era. And as always with him, the Soviet Union remained the beacon of hope. In 1952, as his celebrity had faded in the States, Robeson received the USSR’s highest honorary distinction – the Stalin Prize.

Paul Robeson remained a beloved figure in the Soviet Union until his death, in 1976. While his public persona in the United States never quite recovered from the travails of the 1950s and as, following a mysterious illness he suffered on his visit to Moscow in 1961 (a persistent rumor claimed the disillusioned Robeson had attempted a suicide), he entered a protracted period of physical and psychological decline, his star continued to shine brightly across the eleven time zones of the Soviet Union. “We knew he suffered greatly because he was a black man in America; his voice was the most beautiful thing in the world, everything stopped when he was singing on the radio,” remembered a Soviet contemporary.[7] Even if he harbored private doubts about the Soviet project (and his son, among others, would later insist that he did) he never allowed for any public criticism of the USSR – the land of the grand experiment that gave him hope and dignity but also destroyed the lives of the millions of innocents, including some of his closest friends. And here lies the tragedy of Paul Robeson, a great man and artist whose despair over the indignities borne by black American citizens combined with his profound affection for the Russian culture to present him with a torturous moral dilemma that he ultimately failed to resolve.

One thought on “Paul Robeson’s Tragic Love of Russia”