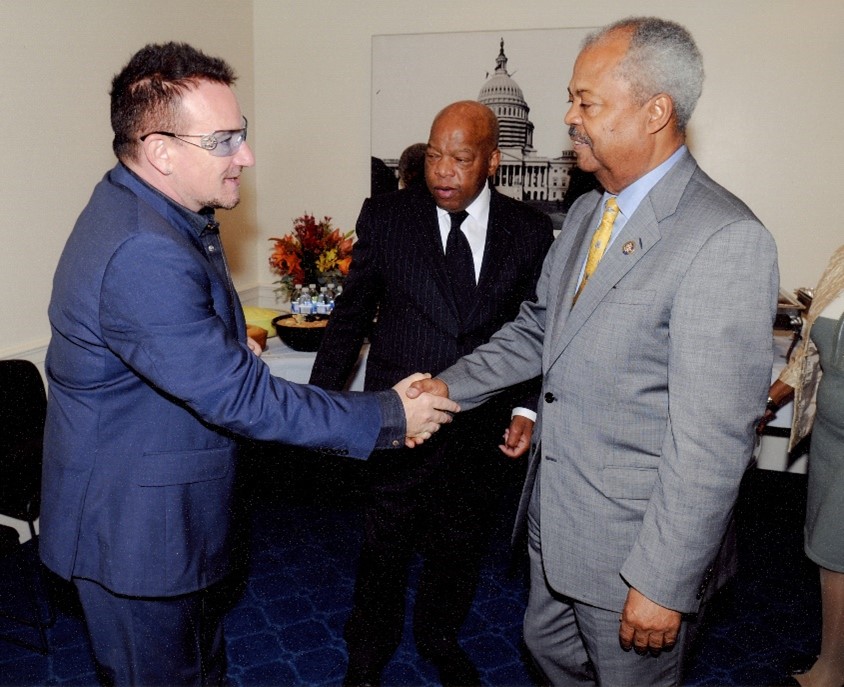 Donald M. Payne served as a U.S. Representative for New Jersey’s 10th Congressional District from 1989 through 2012 and was the state’s first African American congressional representative.  Born and raised in Newark, he is an alumnus of Seton Hall University where he earned his bachelor’s degree in 1957 before continuing his studies at the graduate level at Springfield College in Massachusetts.[1] Before his life in politics, Donald M. Payne was an executive at Prudential Financial, served as vice president at Urban Data Systems and taught in Newark’s Public Schools.  In 1970, he became the first black president of the National Council of Y.M.C.A.s before becoming Chairman of the World Y.M.C.A. Refugee and Rehabilitation Committee.  In 1972, Payne ran for a seat on the Essex County Board of Chosen Freeholders and was elected – serving three terms in total. He also served three terms on the Newark Municipal council from 1982 to 1988.[2]

In 1994, Representative Payne led an official delegation to Rwanda, seeking to end the ethnic violence that claimed hundreds of thousands of lives. He was also among the first to publicly denounce the Sudanese genocide in the country’s Darfur region in 2003.  Later, Payne called for an international tribunal which brought Sudanese militia members responsible for the massacres to justice.[4]  Representative Payne championed the Africa Growth and Opportunities Act (2000) to promote African economic development and trade with the US. He sponsored or co-sponsored dozens of bills to help African countries economically, support peace, expand agricultural programs, provide safe drinking water and promote educational opportunities for millions of children. In 2008 he had a key role in the authorization of up to $48 billion over 5 years to fight HIV/AIDS, a substantial portion of it going to Africa.[5]

Upon his death in 2012, Professor Alemayehu G. Mariam, professor of political science at California State University, San Bernardino and expert in human rights law, eulogized Representative Payne in Ethiopian News and Views: “His passing marks a major setback to the cause of freedom, democracy and human rights in Ethiopia and Africa. But Don Payne has left us a rich legacy of human rights advocacy and legislative action spanning over two decades. It is now our burden — indeed our moral duty — to build, to expand and to deliver on that legacy.”[6]  The son of a chauffeur and lumber handler, Representative Payne worked his way through college while attending Seton Hall University.  He said, “We have to understand there are no more impossible dreams for black youngsters. They can do basically anything they want to do, and if I’m a prime example of that, all the better.”[7]  Whether serving on a global scale as a human rights activist, or motivating black youth locally, both messages are inspiring and demonstrate Payne’s unwavering commitment to service.  The Donald M. Payne Sr. Global Foundation continues Representative Payne’s work as a global human rights advocate and community activist.  You can watch this documentary video, The Life of Congressman Donald M. Payne, Sr. to learn more about his life’s work.

Seton Hall University’s Department of Archives and Special Collections holds the professional papers of Donald M. Payne from his time as U.S. Representative for New Jersey’s 10th congressional district. The materials are related to Congressman Payne’s legislative work, particularly for the

House Committee on Education and Labor and the House Committee on Foreign Affairs, as well as his work on behalf of his district and state. There are also background materials on a wide variety of issues, projects, events, and pieces of legislation relevant to Congressman Payne’s career, and materials related to his involvement in congressional organizations and activities, including a large number of press clippings, recorded appearances and speeches, and photographs depicting Congressman Payne with notable public figures and celebrities including Presidents of the United States and several other countries.[8]

The Donald M. Payne papers, 1988-2012, Mss 0078, are now open for research at the Archives and Special Collections Center. This collection of 53 linear feet is the collected congressional papers of Donald M. Payne, Sr., who was New Jersey’s 10th Congressional District Representative to the United States Congress from 1989-2012. Congressman Payne was New Jersey’s first African American congressional representative, and served eleven consecutive terms, passing away in 2012 during his twelfth term.

Donald Payne, Sr., was a native of Newark, N.J., and attended Seton Hall in the 1950s. A Democrat and a member of the House Committee on Education and Labor and the House Committee on Foreign Affairs, Congressman Payne was a leading advocate of education and human rights. He was especially active in supporting increased funding for higher education and in supporting democratic efforts in Africa, particularly in Sudan. He was a member and former chairman of the Congressional Black Caucus and won a number of awards for his work on behalf of education, democracy, and human rights.

The Donald M. Payne papers chronicle Congressman Payne’s work  during his 23 years in the U.S. House of Representatives. Included are notes and drafts of legislation with which Congressman Payne was heavily involved, papers and photographs from his travels to Africa, research materials related to his areas of interest, and many other materials documenting his work in Congress. This collection is a rich resource for anyone interested in diplomacy and international relations, promotion of education, New Jersey and national politics, political events in Africa over the past 25 years, and the legislative process.

The collection is primarily paper documents and photographs, which are available to researchers in the Archives and Special Collections Center reading room. Advance appointments are required for the use of archival material. Also in the collection are some electronic, audio, and video materials, which are not yet available for research, due to preservation concerns. These materials came to Seton Hall University through the generosity of Congressman Payne’s family and heirs.

Please feel free to contact us with questions or to make an appointment to view this collection!