Trina Padilla de Sanz: A Woman Ahead of Her Time
by Carly Miller, curator

Writing as La Hija del Caribe, Padilla de Sanz was a prominent literary figure in the twentieth century, penning numerous articles, poems, and essays on a wide variety of topics such as history, literature, poetry, music, politics and culture. In a period when expectations for women were mostly confined to the domestic sphere, Padilla de Sanz represents an important deviation from the norm. Breaking free of society’s narrow view of a woman’s place in the world, Padilla de Sanz was an outspoken, unrelenting voice for change.
This exhibit focuses on one very prominent aspect of La Hija’s writings: her activism. She focused on progressive topics such as women’s rights, the preservation of the Puerto Rican culture and identity, and protection and compassion for those most often marginalized and ignored. La Hija’s feminism, patriotism, and drive for social justice are represented in the displayed works. From advocating for compassion on behalf of the incarcerated to calling out the United States for its aggression to highlighting women’s role in wartime, Padilla de Sanz did not shy away from controversial topics.

While the exhibit represents only a small portion of her extensive writing career, it fittingly demonstrates the essence of Padilla de Sanz. Her desire to see society improve formed not only the basis of her writings but also of her life. La Hija was actively involved in community affairs so that she could encourage the type of change that she so often wrote about in newspapers and magazines. Not content to sit on the sidelines, Padilla de Sanz unabashedly ignored the societal expectation of women in the twentieth century. Instead, she carved out a diverse and fulfilling career. She was a woman ahead of her time, paving the way for future generations of women and inspiring progress and reform within society.
For more information about this exhibit or to make an appointment to view the Trina Padilla de Sanz papers, please contact 973-761-9476 or archives@shu.edu.

When I began my internship at the Monsignor William Noé Field Archives & Special Collections Center, I knew that Trinidad Padilla de Sanz (La Hija del Caribe) was a Puerto Rican writer and poet who lived from 1864 to 1957. Although I was excited to dive into this historical project, I did not expect to connect on a personal level with La Hija’s work. As a twenty-something in the twenty-first century, I did not anticipate much common ground with a twentieth century poet. Different eras, different problems, different opinions. Or so I thought.

While the topics that Padilla wrote about reflected the issues facing her generation, many would also comfortably fit today in the evening news segment or on the front page of the paper. She voiced her opinions on topics ranging from divorce and feminism to wealth disparity and the death penalty. She was an activist before it was vogue, using the power of her pen to speak on behalf of society’s most marginalized groups.

Padilla’s activism is just one facet of her diverse and extensive career. She also delved into history, music, the arts, and literature. She was a pianist, a literary critic, and a teacher. She was unfailingly devoted to her family. Yet, it was the activism that I was able to most indentify with. It constituted a large part of her life and defined not only her work, but her strong character as well.

For this reason, the online exhibit features works which highlight her activism as a writer. Specifically, the exhibit focuses on works related to patriotism, women’s issues, and social topics. While the exhibit cannot begin to encompass La Hija’s life and career, it hopefully provides a glimpse into the person I discovered this summer.

If you are interested in learning more about Trina Padilla de Sanz, please check out the online exhibit.

Continue to check back for updates on the Padilla de Sanz papers or stop by the archives to fully immerse yourself in her world. 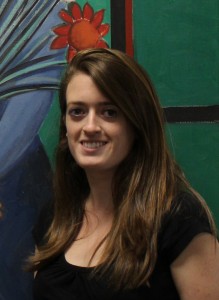 Carly Miller is the Special Collections intern at Seton Hall University Libraries. She is currently working on the Trina Padilla de Sanz papers. The papers of Puerto Rican poet and activist Trina Padilla de Sanz are in the Msgr. William Noé Field Archives & Special Collections Center through the Unanue Latino Institute. Her responsibilities include outreach and publicity, translation of materials, and arranging exhibitions for the collection.

She holds a Bachelor of Arts in History and Spanish from The College of New Jersey. After graduating in 2013, she moved to Madrid, Spain for a year to teach English in a bilingual elementary school. This experience allowed her to challenge herself in a new environment, practice her language skills, and travel extensively. Since returning to New Jersey, Carly is employed as a Spanish interpreter for a claims adjusting company, facilitating communication between clients and their legal representatives.

Beginning in the fall of 2015, Carly will be attending Rutgers University to obtain a Master’s degree in Library and Information Science. She is interested in pursuing this degree in order to learn not only how to organize information in today’s digital age, but also how to connect people to information. With her current internship, she hopes to further nurture her passion for history and gain valuable, hands-on experience in archival work.

Written by Carly Miller, Special Collections Intern
Since the arrival of Spanish explorers in the late fifteenth century, a defining characteristic of Puerto Rico has been colonialism. In one form or another, this tiny island has been subjugated by a larger power. After four centuries of Spanish rule came to an end in the late 1800s, Puerto Rico fell under U.S. control as a territory, a status that continues to the present day. As a result of this perpetual intrusion by foreign nations, a parallel theme throughout the island’s history has been the fight for independence.

Trina Padilla de Sanz was no stranger to this liberation movement. Although she wore many hats during her lifetime, it was her Puerto Rican pride that was most inextricably linked to her identity. Her devotion to her homeland, or “La Patria,” permeated all aspects of her life. Her nickname, “La Hija del Caribe,” was not only tribute to her father, but an acknowledgement of her cultural pride as well.

La Hija championed Puerto Rican independence and preservation of its culture and customs using the most effective weapon at her disposal, her pen. Throughout her lifetime she wrote harsh critiques of American influence in Puerto Rico, believing fervently in Puerto Rico’s right to self-govern. In an inquiry entitled “Apuntes sobre Puerto Rico,” La Hija boldly addressed the hypocrisy of a nation, predicated on the idea of democracy, denying another nation its independence.

“…and if the United States does not want to see itself in front of the nations of the world as a laughable Republic, it has to give Puerto Rico its Independence…a right that nobody can deny.”

With this sharp declaration, Padilla de Sanz demonstrated that she did not passively observe with her pen, rather she actively fought for change with it. She was firm, vocal, and unwavering in her defense of Puerto Rico.

Part of her pro-independence stance included extolling Puerto Rican culture and language. She regularly called on her fellow compatriots to fight to preserve the Spanish language, understanding a language’s role in preserving a culture’s identity. She believed that cultures that let themselves be completely absorbed by stronger powers would simply cease to exist. She was quick to highlight the many accomplishments produced by Puerto Ricans in literature, the sciences, and the arts.

In addition to her writings, La Hija rebelled against foreign influence in other ways. Her granddaughter, Yolanda Fernández Sanz, recalled a time in which Padilla de Sanz, ignoring the law against displaying the Puerto Rican flag, hung it defiantly from her balcony. Although it was an illegal act, no one challenged La Hija (Fernández Sanz 158).

La Hija’s fight for independence was an unyielding constant throughout her life. Shortly before passing, she made the request to be buried with the Puerto Rican flag. Even in death, her devotion and loyalty to her treasured Puerto Rico was unequivocally on display.

It would be impossible to discuss Puerto Rican literature without mentioning the distinguished poet, Trina Padilla de Sanz. Born in 1864 in Vega Baja, Puerto Rico, Padilla de Sanz was the daughter of the poet, medic, and political activist José Gualberto Padilla, also known as “El Caribe.” Following in her father’s literary footsteps, Padilla de Sanz developed an impressive career in poetry, editing her father’s works as well as publishing her own collections. Writing under the moniker “La Hija del Caribe,” many of her poems were laced with powerful imagery of nature to celebrate the beauty of life, while her style reflected a harmonious and musical touch.

During her lifetime, La Hija’s passions extended beyond poetry. She was also a gifted pianist, a beloved and dedicated piano teacher, a writer, a suffragist, a social activist, and a crusader for Puerto Rican independence and cultural preservation. She was a regular contributor to many publications, writing essays on an array of topics including Puerto Rican politics, women’s rights, education, religion, the plight of the poor, and the defense of the Spanish language. In an era when expectations for women revolved around the domestic sphere, Padilla de Sanz was a woman ahead of her time, voicing her strong opinions without apology.

As a crusader for social justice, La Hija believed in fighting for change with her pen. In the poem below entitled “Ana Roque de Duprey,” she honors her recently deceased friend, the accomplished suffragist Ana Roque de Duprey. Although Roque de Duprey fought for decades for the women’s suffrage movement, she died without ever voting in her native Puerto Rico. As La Hija eloquently states:

“And upon not being able to vote here in her land,

she went to the Democracy of the stars

In just a few lines, she captures the essence of her friend and the supreme injustice of the exclusion of women from the voting process. Women’s suffrage was a long struggle, one that La Hija fought for with immense passion and dedication.

Padilla de Sanz expands upon the particular injustice suffered by Roque de Duprey at the end of her life in a note below the poem:

“…now an octogenarian [Roque de Duprey], when this [women’s suffrage] was instituted on the island, she went out to vote for the first time and, although she died with the illusion of having voted, her vote was voided for certain technicalities…”

While it may be a blessing that Roque de Duprey departed this life thinking she achieved her lifelong goal of casting a ballot, the bitterness that La Hija feels for her friend is glaringly evident. It is not only a tribute to her friend’s suffering, but also reflects the struggle that women faced even after reaching major milestones in their movement.

Padilla de Sanz possessed an unparalleled passion for life, finding beauty and joy in every day despite various hardships. Well into her old age, she continued writing, playing and teaching piano, engaging with her community of Arecibo, and spending time with her cherished children and grandchildren. La Hija died at the age of 93 in Arecibo in 1957, leaving behind an impressive legacy, which cemented La Hija’s place among the most significant literary figures of the twentieth century.